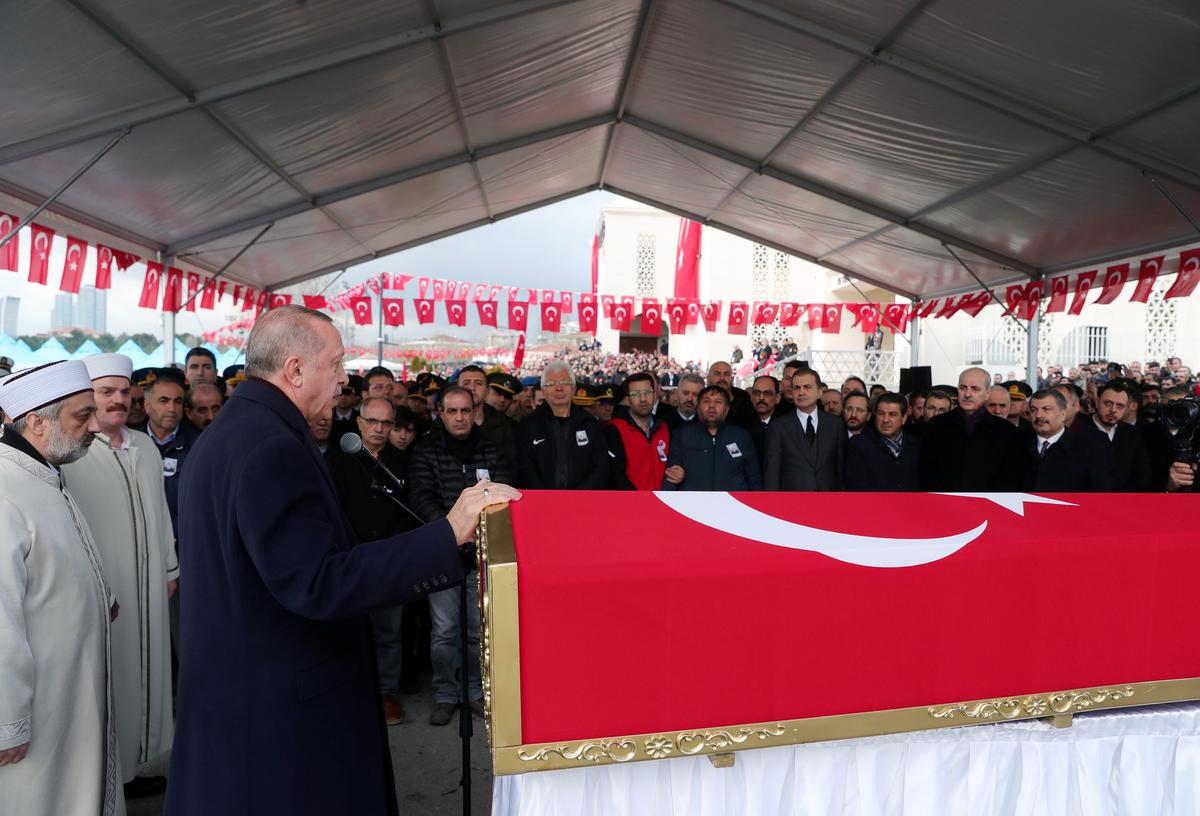 But the Syrian government forces, backed by Russian air power, kept up air strikes in the northwestern province of Idlib, attacking the strategic city of Saraqeb which sits on an important road, the Syrian Observatory war monitor reported.

The government forces’ air strikes are part of a major assault to capture the province, part of the last remaining territory held by rebels backed by Turkey.

Turkey, which has poured forces into Idlib, also hit back, killing 26 pro-Damascus troops around Idlib and the Aleppo countryside, the Syrian Observatory said, and Turkey-backed rebels said they had re-taken six towns and villages in southern Idlib.

With diplomacy sponsored by Ankara and Moscow to ease tensions in tatters, Turkey has come closer than ever to confrontation with Russia on the battlefield in Syria.

Speaking in Istanbul, Erdogan said he had told Putin in a phone call to stand aside and let Turkey “do what is necessary” with the Syrian government. He said Turkey did not intend to leave Syria right now.

Three rounds of talks between Russia and Turkey failed to yield a ceasefire, but the Kremlin said on Saturday that Putin and Erdogan would discuss all aspects of the Syrian conflict in planned talks in Moscow.

It set no date but officials on both sides say the talks will be on March 5 or 6.

Turkish Foreign Minister Mevlut Cavusoglu told reporters in Doha the Idlib issue can be settled only when Erdogan and Putin meet.

A U.S. State Department official told reporters on Friday that Washington was looking urgently to support Ankara in Idlib with information-sharing and equipment, but that any assistance would not involve military moves by American units.

After 33 of its soldiers were killed on Thursday, Turkey said it would allow migrants it hosts to freely pass to Europe. One more Turkish soldier was killed on Friday, raising this month’s toll to 55.

Turkey hosts some 3.7 million Syrian refugees, in addition to Afghans, Iranians, and Moroccans among others. It has said it cannot take another refugee wave from Idlib.

Violence in Idlib has displaced 1 million civilians since December inside the country near the Turkish border in desperate winter conditions.

Erdogan said 18,000 migrants has crossed the border to Europe from Turkey since the gates were opened, without providing evidence, and that the number could rise to 25,000-30,000 on Saturday.

Greece and Bulgaria, both European Union member states neighboring Turkey, said they would not admit the migrants. Greek police fired teargas toward migrants gathered on its border with Turkey and demanding entry on Saturday.

“The European Union needs to keep its promises. We don’t have to take care of this many refugees, to feed them,” Erdogan said.

The EU said in a statement it was actively supporting Greece and Bulgaria in protecting the bloc’s borders, but also expressed condolences with Turkey over the soldiers’ deaths and said it was ready to step up humanitarian support.

The head of the bloc’s executive European Commission, Ursula von der Leyen, said the EU was ready to involve its border agency Frontex to help control the land border.

Turkey’s borders to Europe were closed to migrants under an accord between Turkey and the EU that halted the 2015-16 migration crisis when more than 1 million people crossed into Europe by foot.

Bulgarian Prime Minister Boyko Borissov said he was planning to host a high-level meeting to seek long-lasting solutions for Syria and migrants, and that he would meet Erdogan on Monday.

He said there was currently no migration pressure on the Balkan country’s border with Turkey.