Early voting began in New York City on Saturday, resulting in long lines across the city. Timothée Chalamet was one of thousands who rolled out of bed and into an hours-long line to wait to cast their vote. Thankfully Chalamet, who stood in line at Madison Square Garden, had some company as he waited: He chatted on a livestream with his friend Selena Gomez.

Gomez told Chalamet that she had voted in person, to which he responded, “All that mail voting, they de-legitimize it, or they tried to legitimize it, so that’s why I wanted to go in person. I just want to, like, see it done.” He added: “Everyone’s telling young people to vote, but it feels kind of condescending, ‘Duh, we’re gonna vote. Duh.'”

Then came a moment that pretty much defines the playful friendship these two share. As they were talking about the importance of young people voting, Chalamet said: “You’re 29.” Gomez sat her with her mouth wide open (she’s 28). “Oh. My. Gosh!,” she finally said, feigning anger.

Another highlight from the call: “Oh, man. I really hope this guy loses,” Chalamet said as he looked around, afraid he couldn’t get partisan at a polling facility. “I know,” Gomez said, laughing nervously.

Never fear; it looks like Timmy finally made it to the voting booth: 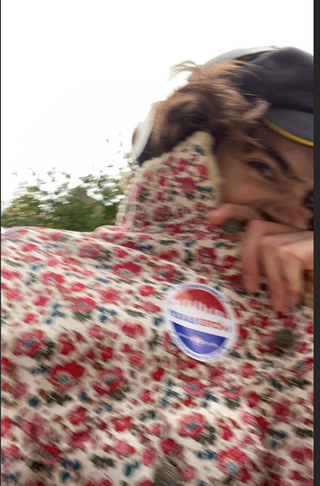 This livestream with her pal is hardly the first thing Gomez is doing to get out the vote this election. On Friday, Stacey Abrams and Selena Gomez joined in a conversation hosted by She Se Puede, a Latina activist organization formed during the 2018 midterms. Because not much is happening in-person these days, Abrams and Gomez spoke over a Zoom call about the power that Latina voters and Black women voters have in the 2020 election.

When they kicked off the call, Gomez admitted she was a bit starstruck to be talking to the Georgia activist and politician. But it was Abrams who paused before answering a question to let Gomez know that this conversation was going to win her big points with her teen niece.

A note to Abrams’s niece: Your aunt is very cool.

Gomez asked Abrams what Latinas should keep in mind if they are thinking of running for office. Here was her answer, in part:

“As a young Black girl, I did not know of a Black politician. When I moved to Atlanta, I started to see Black politicians in everyday spaces. I got to work for a Black woman who became mayor. And when I became Democratic leader, I hired a team that looked like what I was used to. I hired a Black person and a white person…I took myself to task. I was sitting in my office, and I was like, ‘you just replicated exactly what you castigate others for doing.’ So I picked up the phone and I called the Georgia Association of Latino Elected Officials [GALEO], and said, ‘I want to hire someone Latino. I want to make certain that my office actually looks like Georgia…I say all that to say this: When I ran for office the first time, it was because I wanted to speak on behalf of communities that wanted to be included. And what I learned was that my job wasn’t to speak for them; my job was to create a platform and a space for them to speak for themselves….No matter who you are, when you stand for office, you’re not standing for yourself…you are creating a space so that someone that looks like you, someone that had your experience suddenly has a belief that they can do it.”

Hilary Weaver
Hilary Weaver is a freelance writer based in New York who writes about politics, queer issues, Meryl Streep, Glenn Close, and every woman the Queen has ever made a dame.

This content is created and maintained by a third party, and imported onto this page to help users provide their email addresses. You may be able to find more information about this and similar content at piano.io

Book Riot’s Deals of the Day for November 22, 2020
‘A war-like situation’: Deadly protests rage over arrest of pop star turned presidential candidate
Three days of national mourning in Argentina for footballer Diego Maradona
‘Economic emergency’ sees Sunak freeze public sector pay and cut foreign aid
Travellers can cut quarantine on arrival from next month – but they’ll have to pay for it