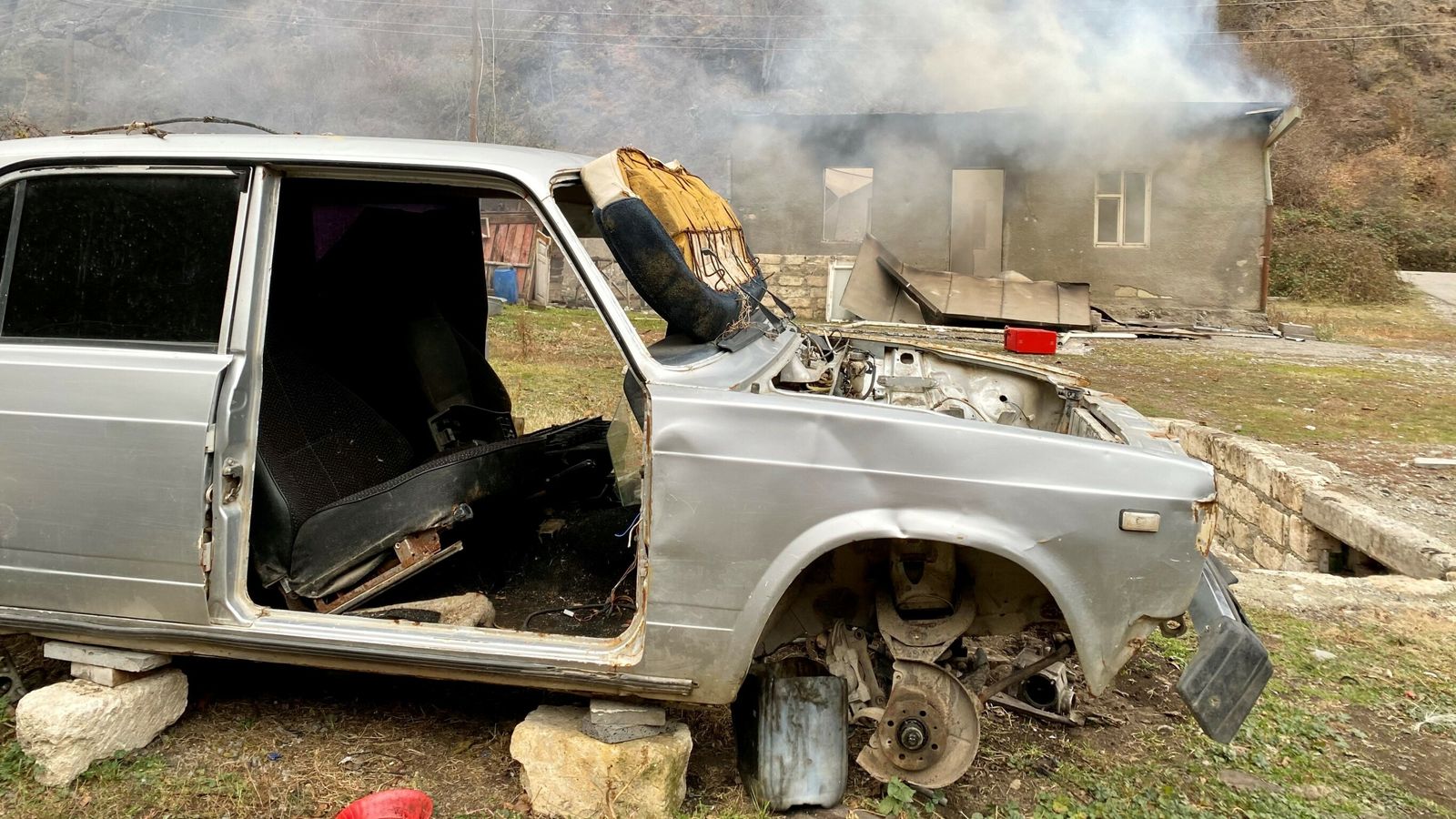 Imagine how it feels to be given two days’ notice to pack up your home.

The desperate situation follows a war which has already claimed the lives of your children and sunk your nation into a bitter defeat.

Now, the hastily drawn up peace demands that your house be handed to the victors and it seems you were the last to know.

This is what is happening to ethnic Armenians in the disputed territory of Nagorno-Karabakh, over which there has been six weeks of fighting.

On a windswept farm above the village of Nor Seysulan, we met a mother who screamed out her fury. Her sacrifice in this war seems pointless and painful.

“Why did they take our children and kill them?” she cries. “They could have just said, ‘we are giving the lands away, go and live your life’.

“I don’t even know where my dead child is to bring back and bury. Why are they doing this?”

Her family have livestock, and they don’t know how to move it in time.

Her surviving son served in Shushi, or Shusha as the Azerbaijanis call it. The capture of Shusha was the tipping point for Azerbaijan – the moment when Armenia realised the main city of Stepanakert would be next and their chance of victory had gone.

Her son had been in Shushi for six weeks when the order came to leave. One of his relatives was “dead next to me and I didn’t know whether to carry his body or save myself”, he says.

“Why should I stay? My brother is dead, my cousin is dead.” He points to his throat. “It would only take one knife here and that’s it.”

This is the story you hear over and over again in Nagorno-Karabakh and the regions around it.

It is unbearable to listen to, not least because of the way history has repeated itself in these contested mountains: lands lost and won by Azerbaijan, won and lost by Armenia in two wars almost 30 years apart.

Civilians from both sides have had to move as the borders are drawn and re-drawn.

Nor Seysulan is one of seven villages which were handed to Azerbaijan this Friday, along with the city of Aghdam. They were all newly built after the last war to house displaced Armenians. Now those Armenians are homeless again.

Ramila Ovanesyan opens up the back of a van. Inside are what look like a pile of blankets and a memorial stone. “I have three dead bodies in here,” she says. “I’m taking a handful of soil of my husband, my mother and my father.”

She wants to know how the government can possibly provide compensation for what she’s lost.

She adds: “My husband was a veteran and died of cancer and now I’m taking all the stones and the bodies and going I don’t know where. Let them at least give me a piece of land where I can bury them.”

Artash Parshanyan, 70, is from Old Maragan, and tells us: “First the Turks kicked us out and we came here, and now they’re kicking us out again.”

No one here refers to Azerbaijan as the victors. It is always the Turks. It is clear who they think won this war for Azerbaijan.

“Azerbaijan is teaching their newborn children that we are enemies,” Mr Parshanyan says. “They’re teaching hate.”

The city of Aghdam, which was handed back to Azerbaijan this Friday, was never resettled after it fell to Armenia in 1993. For the first time since then, Azerbaijan has held Friday prayers in the mosque – long derelict but still standing.

“Aghdam region returns to us without firing a single shot or sacrificing a single martyr,” Azerbaijan’s President Ilham Aliyev tweeted triumphantly. “This is our tremendous political success.”

But there is a terrible cost for the roughly 2,500 civilians who’ve had to abandon the nearby villages. Just as there is for all those who have already vacated the mountainous Kalbajar region, sandwiched between Nagorno-Karabakh and the northeast of Armenia.

Or those whose homes are in the Lachin corridor, which will pass into Azerbaijani hands on 1 December.

These are territories which used to be populated by Azerbaijanis and Kurds. After the ceasefire in 1994, 600,000 people fled to Azerbaijan from Nagorno-Karabakh and the seven surrounding Azerbaijani districts. The Azerbaijani president wants them to return. 2020 is his victory and his payback.

Many of the homes in Kalbajar are burnt already. Houses in Nor Seysulan and the villages around Aghdam are smouldering still.

More will burn before this latest handover of territory is completed, around the start of December. Some Armenians would rather destroy their homes than have Azerbaijanis live in them.

Azerbaijanis will begin to trickle back.

There’s a welcome message for them sprayed on the wall of a vandalised petrol station on the main road through Kalbajar. The spelling is peculiar but the meaning is clear. “F*** Azerbaijan, Azerbaijani Terrorists,” it reads.

Georgiy Emilian is standing guard in front of a nearby restaurant. There are no customers anymore but he keeps himself busy directing the traffic.

He doesn’t believe many Azerbaijanis will come back voluntarily to the mountains of Kalbajar, stuck as they are between the Armenian part of Nagorno-Karabakh and Armenia proper.

“We would both be occupied then,” he says.

He remembers the time when Azerbaijanis and Armenians lived side by side, before the first war.

“Back then it was the Soviet Union. Neither us nor them were hurting each other. But now the situation is different. The bread’s been broken in half. It’s two different pieces now.