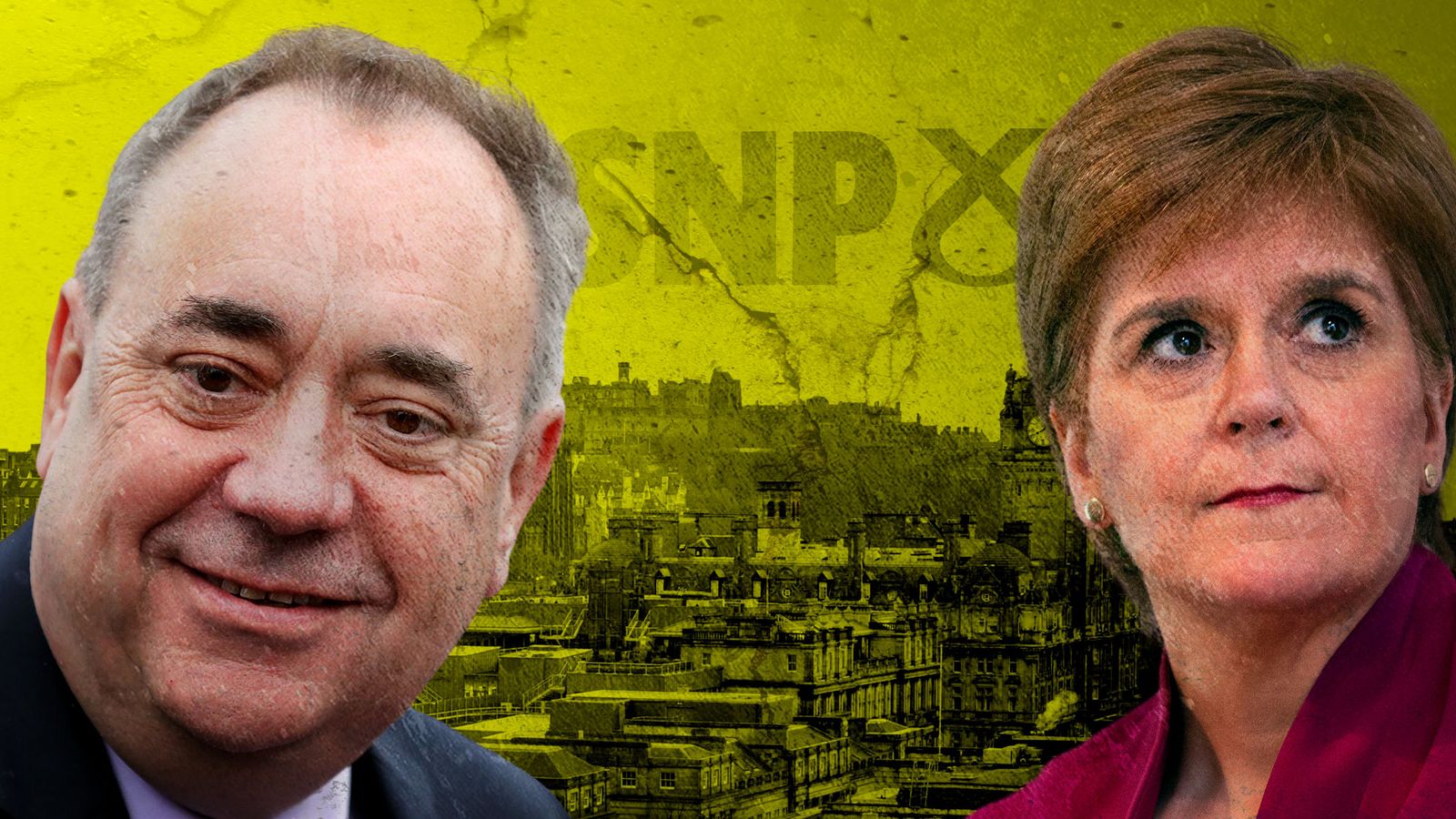 Alex Salmond, Scotland’s former first minister, is appearing today at a government committee looking into the mishandling of harassment complaints against him.

It is likely to hear about his earlier written evidence naming people he claims were involved in a “malicious and concerted” attempt to oust him from public life.

Here’s who’s who – and why the Holyrood inquiry could deepen rifts at the heart of Scottish politics.

is for Alex Salmond, icon of the Scottish independence movement, who claims former colleagues in the party he once led tried to remove him from public life and even have him put in jail.

is for bitter enemies.

The Salmond/Sturgeon combo took Scotland to the brink of independence, now it’s all about acrimony. He alleges that the current first minister broke the ministerial code, she accuses him of creating an “alternative reality”.

Alex Salmond says senior officials in the Scottish National Party (SNP) and Scottish government were involved in a “malicious and concerted effort” to damage his reputation.

is for the despair openly expressed by some members of Holyrood’s harassment committee, who accuse the Scottish government of undermining their inquiry by a failure to provide the information and cooperation they need to get to the truth.

A number of government witnesses have been forced to correct or clarify evidence given under oath. Committee members have accused them of “evasion and secrecy”.

is for the Fairness at Work code, a civil servants’ complaints procedure drafted in 2010 following union concerns about bullying around the office of the then first minister Alex Salmond.

Nicola Sturgeon, as his then deputy FM, was given a role in dealing with complaints.

G is for Gus, or Angus Robertson.

An Edinburgh Airport manager called him in 2009 about Alex Salmond’s perceived “inappropriateness” towards female staff and he was asked to “informally broach” it with him.

Mr Salmond denied he had acted inappropriately in any way.

is for the harassment committee itself, which will hear evidence from Mr Salmond and Ms Sturgeon.

The committee of MSPs was set up to look into what lay behind the Scottish government’s mishandling of an internal inquiry into harassment complaints against Mr Salmond by two female civil servants.

There is a legal requirement to protect the identities of complainants in Alex Salmond’s criminal trial. There’s some crossover with the harassment inquiry, one of the reasons given for redactions in some of the published evidence.

is for judicial review, the court action that Alex Salmond took in 2018/19 to challenge the legality of the Scottish government’s investigation of harassment complaints against him.

is for Kenny MacAskill MP, Scotland’s former justice secretary and an ally of Alex Salmond.

He’s told Sky News of a text message in which one SNP official spoke of encouraging an alleged victim to give evidence in the criminal trial against Alex Salmond.

is for legal advice.

It might shed light on suggestions ministers ploughed on with a legal challenge despite being advised not to. The government points out that advice is typically subject to legal professional privilege and should remain confidential.

is for ministerial code, which Alex Salmond claims Nicola Sturgeon breached in a number of ways.

They include allegedly misleading parliament about when she learned of complaints against him, and failing to stop her government prolonging an expensive judicial review challenge despite legal advice it was doomed to fail.

The code dictates a minister in breach of it should offer their resignation.

is for Nicola Sturgeon, leader of the SNP since 2014, who has made her party a racing certainty to win the forthcoming Scottish parliament elections and has helped to shape opinion polls showing unprecedented support for Scottish independence.

is for Operation Diem, the name of the police investigation that led to Alex Salmond’s arrest on criminal charges.

He was acquitted after a High Court trial in March 2020 of 13 sexual assault charges against nine women.

is for Peter Murrell, SNP chief executive and husband of Nicola Sturgeon.

Alex Salmond claims he deployed SNP staff to “recruit” staff and ex-staff to submit police complaints about him. Mr Murrell has denied plotting against Mr Salmond.

is for questions that everyone’s asking.

Among them is James Hamilton, Ireland’s former director of public prosecutions, who is an independent adviser on Scotland’s ministerial code.

As such, he’s the man conducting a parallel investigation into whether the first minister breached it. His conclusions are due in the coming weeks.

Parts of Alex Salmond’s written submission to the harassment committee have been redacted, which means he could have difficulty referring to those subject areas in his oral evidence – and they are central to claims that Nicola Sturgeon broke the ministerial code.

is for sex crimes and the reporting of them.

Rape Crisis Scotland has said that aspects of the inquiry, and some of the written submissions that have been published, have undermined efforts to improve women’s confidence in reporting crimes such as sexual harassment.

Did Nicola Sturgeon discuss complaints against Alex Salmond during a meeting in her office?

Sky News revealed a first-hand account of a meeting in Nicola Sturgeon’s office where complaints against Alex Salmond were discussed. She told parliament she learned of them four days later.

How a judge in the Court of Session described the Scottish government’s internal investigation into harassment complaints against Alex Salmond in January 2019.

is for the “Vietnam Group” – the name of a WhatsApp group involving SNP members.

The Crown Office released its communications to the committee, which decided they weren’t relevant to its work. It now wants to see texts between SNP figures that Alex Salmond believes show the effort to destroy him.

is for Wolffe, as in James Wolffe QC, Scotland’s lord advocate.

As head of the Crown Office and the government’s chief legal adviser, he was summoned to parliament to deny opposition claims of political influence in redacting parts of Alex Salmond’s written evidence.

is for the cross on the ballot paper.

How will the fallout from this saga affect the SNP at the 6 May Scottish parliament elections?

is for Yes, the independence campaign that took Scotland to the brink of breaking away from the UK in 2014.

In the event of an Indyref2, how far will the Sturgeon/Salmond split fracture the independence movement itself?

is for zero chance of an outcome to this inquiry that suits everyone.

There’s every chance, however, that widespread dissatisfaction with the process will damage the parliament itself – what opposition MSPs have called a “crisis of credibility”.

Winners of the 2021 PEN America Literary Awards Announced
Fortnite: How to Find Out How Much Your Locker Cost | Screen Rant
Under-50s to be offered COVID jabs ‘this week’ as govt beats latest vaccine target
Swizz Beatz Remembers DMX: “He Lived His Life for Everyone Else”
Book Riot’s Deals of the Day for April 14, 2021