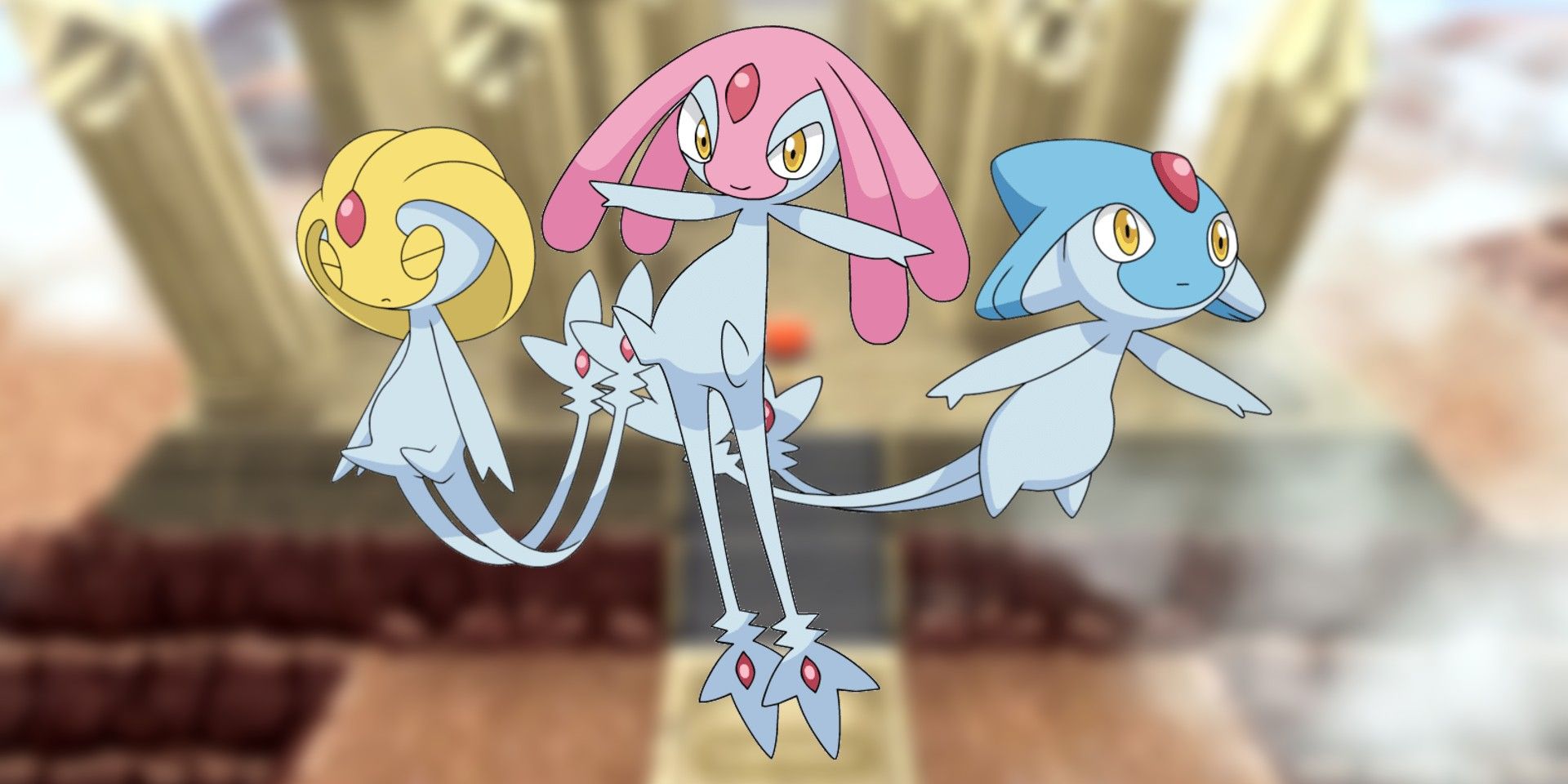 Pokémon Brilliant Diamond & Shining Pearl bring everything back from the original games, including how to find and catch Uxie, Mesprit, and Azelf. While several quality of life improvements have been made to reflect the current state of the Pokémon series additions, working with, finding, and capturing the Legendary Lake Trio of Uxie, Mesprit, and Azelf remains untouched. These three Pokémon play a significant role in the story and extended lore, and are the reason why players eventually encounter the Brilliant Diamond and Shining Pearl Legendary exclusives, Dialga and Palkia.

In the Pokémon world, Uxie, Mesprit, and Azelf represent knowledge, emotion, and willpower, respectively. They shared their strengths with the Sinnoh region when people and Pokémon first began to cohabitate. Throughout the Pokémon BDSP story, their significance is shown through the creation of the Red Chain. Although the Red Chain is an unobtainable key item, it would theoretically allow the user to control both Dialga and Palkia at their full power, unrestricted by a Poké Ball. Depending on the game, Cyrus, leader of Team Galactic, was attempting to use the Red Chain to control the respective Legendary Pokémon.

Related: Pokémon BDSP: Where to Find Dusk Stone (& What It’s For)

Mesprit, Azelf, and Uxie are three of the strongest Pokémon available in the Sinnoh region, and some of the most difficult to capture. All three members of the Legendary Lake Trio are found at level 50, and each of them has an extremely low capture rate. In addition to lowering their HP, using a move like Thunder Wave can help increase their chances of being captured. Players will need to stock up on plenty of Poké Balls in order to capture Mesprit, Azelf, and Uxie, as each member can easily require more than 60 Poké Balls for the unluckiest of trainers.

Where Uxie, Mesprit, & Azelf Are In Pokémon BDSP

Before being able to catch Mesprit, Azelf, and Uxie, players will need to first beat the main story and defeat the Elite Four in Pokémon BDSP. The National Dex is not required to capture any of the Lake Trio, but they cannot be captured before the Elite Four has been defeated. Upon beating the Elite Four players will be returned to Twinleaf Town, and they can begin hunting for the three Legendary Pokémon by heading to Lake Verity.

Inside the Lake Verity cave is Mesprit, who, upon interacting with it, will disappear from the cave. Mesprit will continuously teleport around the Sinnoh region, heading into a new area every time players travel to a new area themselves. In order to track down Mesprit, players will need to head to Jubilife City to receive a new app for the Pokétch in Pokémon BDSP. Speak with the president of the Pokétch Company to receive the Marking Map app, which will automatically track the location of Mesprit as it travels across the Sinnoh region. To intentionally trigger Mesprit, players will have to go back and forth repeatedly between two given areas until Mesprit makes its way to the player’s location. There is no set time limit for when Mesprit will be in the trainer’s vicinity, so all players will have to exercise patience as they await for Mesprit’s arrival.

Once Mesprit is in the same location, walk around inside the tall grass to encounter it in Pokémon BDSP. Its distinct Lake Trio battle music will begin playing, indicating that Mesprit has been found. Finding Mesprit is only part of the challenge, however, as the Pokémon will always run away unless it can be trapped in battle. Obvious Pokémon moves like Mean Look or Block can trap Mesprit in battle, although the only way to keep Mesprit trapped is to make sure that Pokémon using either move doesn’t faint.

Pokémon like Crobat, Mismagius, and Honchkrow learn Mean Look by leveling up, while Sudowoodo, Snorlax, and Bronzong can learn Block. Additionally, a Wobbuffet with it’s Shadow Tag ability can prevent Mesprit from escaping, but unfortunately the Arena Trap ability of Dugtrio will not work. While the two abilities technically have a similar affect on opponents, Arena Trap will not work on Pokémon that are not grounded, or Pokémon like Mesprit who has the Levitate ability.

Although Honchkrow is a Pokémon Brilliant Diamond exclusive, it is the best option to use out of the aforementioned Pokémon because it is a Dark-type. Being a Dark-type prevents Mesprit from being able to attack Honchkrow, as its only damaging moves are both Psychic-type attacks. Alternatively, an Absol that knows False Swipe and Mean Look could be used on Mesprit, but acquiring this particular Absol takes time. False Swipe is a great move to use on wild Pokémon because it will always leave the opponent with one HP.

There is a chance that an Absol that knows Mean Look can be caught in the Grand Underground, but a guaranteed method to getting an Absol that knows Mean Look is by breeding it with an Umbreon after receiving the National Dex. Luckily, Pokémon BDSP has a False Swipe TM that can be purchased in the Veilstone City department store and taught to Absol. Regardless of which Pokémon players choose to use to capture Mesprit with, the most important part is having a Pokémon that prevents it from escaping. Alternatively, players could use their Master Ball to capture Mesprit without fail.

Azelf can be found inside the Lake Valor cave, and unlike Mesprit it will not run away. It’s best to save before fighting Azelf, in the event that it accidentally faints from a too strong attack. However, like Mesprit, an Absol that knows False Swipe is perfect for this fight because the only attack moves Azelf knows are Psychic-type moves. Out of every Psychic-type in the Sinnoh region, Azelf has the best Attack stat in Pokémon BDSP. Player will want to avoid whatever damage they can from Azelf, as it is not uncommon for the Legendary Pokémon to knock out an entire team before long.

Like Azelf, Uxie is a stationary battle that takes place in the Lake Acuity cave. Although Uxie typically has a more defensive stance than either Azelf or Mesprit, the final member of the Legendary Lake Trio can be just as powerful. Once again, an Absol with False Swipe is the best option to use against Uxie as it only knows Psychic-type attacks. Uxie also holds a spot among Sinnoh’s best defensive Pokémon as the Psychic-type with highest Defense stat in Pokémon BDSP.

Next: Pokémon BDSP: How to Get The National Dex

Kaleb is a freelance game guide writer for Screen Rant, based in NY. His hobbies include streaming on Twitch under @captnkahleeb and exercising. If the controller is down he is most likely doing something in the gym or trying to learn something random from YouTube. Occasionally, Kaleb spends his time studying a variety of subjects in philosophy.