Emmanuel Macron has responded after Liz Truss refused to say if he was a “friend or foe” during the penultimate Conservative leadership hustings on Thursday.

Asked if Mr Macron, the French president and leader of the UK’s closest neighbour, was a “friend or foe”, the Conservative leadership race frontrunner replied: “The jury is out.”

She added: “If I become prime minister, I will judge him on deeds, not words.”

Responding to the foreign secretary’s comment on Friday morning, the French president quipped that “the United Kingdom is a friendly nation, regardless of its leaders, sometimes in spite of its leaders”.

He told broadcasters: “If I were asked the question, this is roughly how I’m going to answer you – whichever person is being considered and whatever the future leadership in Britain, I don’t hesitate one second. The United Kingdom is France’s friend.”

President Macron continued: “If, between us as French and British people, we aren’t able to say if we’re friends or foes – the term isn’t neutral – we’re heading towards serious problems. ‘UK is a friend in spite of its leaders’

“So yes, certainly, let me say that the British people, the United Kingdom is a friendly, strong, ally nation, regardless of its leaders, and sometimes in spite of and beyond its leaders, or any potential slip-ups they make when playing to the gallery.”

The relationship between the UK and France has suffered since Brexit, with the two sides rowing on issues such as fishing and migration.

Labour warned that Ms Truss’s comment, which could be seen to risk straining tensions with France, showed a “terrible and worrying lack of judgment”.

“It was clearly said as a light-hearted comment with a touch of humour,” he said.

“We like people to judge us on our actions, on our deeds, not words. And I think it is right that we also hold our allies to that very high standard.”

He has previously said he wants to reset the UK’s relationship with Europe if he wins the race to succeed Boris Johnson. 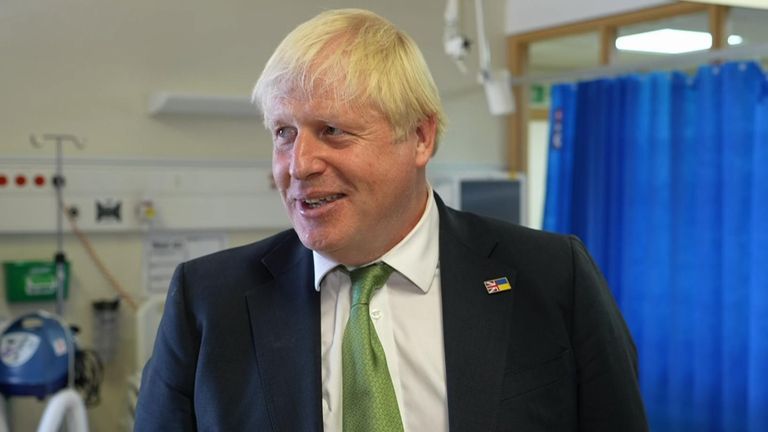 Meanwhile, the PM described President Macron as a “tres bon buddy” of the UK when asked about Ms Truss’s comments.

He added: “I think the relations between the UK and France are of huge importance. They have been very good for a long time, ever since the Napoleonic era basically, and I think we should celebrate that.

“As for Emmanuel, I’ve had very good relations with him and I can tell you something: he’s a great, great fan of our country.”

He continued: “And there were lots of chuckles around it. Liz and I both know that France is a strategic ally in defence, cyber, in our war effort in helping Ukraine, all these things we work very closely together.

“We like to be held by our allies on our actions and our deeds, not words, as we have done in Ukraine. Liz has led that effort in facing down Putin and his cronies and sanctioning them and of course, she will continue to do that as prime minister.”

During the quick-fire questions round at Thursday’s hustings, both Tory leadership candidates were asked if they would rather be stuck in a lift with Scottish First Minister Nicola Sturgeon or Labour leader Sir Keir Starmer.

Mr Sunak quipped that he would “rather take the stairs”, leading to a large round of laughter from the audience.

Ms Truss said she would pick Ms Sturgeon so she can “persuade her to stop being a separatist by the time we got to the ground floor”. 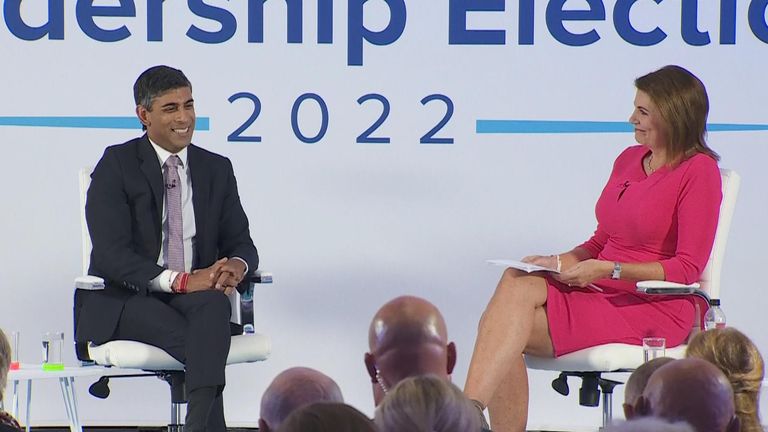 ‘Rather take stairs’ than be stuck in lift with Starmer

The foreign secretary previously suggested she will “ignore” the Scottish leader over her wish for another independence referendum and called her an “attention seeker”.

It led to a war of words, with Ms Sturgeon hitting back that Ms Truss asked her how she could get into Vogue when they met briefly last year.

After giving her answer, Ms Truss could not resist making a dig at the Labour leader, saying: “Frankly, being stuck in a lift with Keir Starmer would be extremely boring.”

The opposition leader has previously been forced to defend himself against accusations he is too boring to be prime minister, saying “the only thing that is boring is being in opposition”.

Read more:
What have the Tory leadership candidates pledged for the country?

Ms Truss also said Mr Johnson would be a better prime minister than Mr Sunak after her leadership rival said he would prefer to see her in Number 10 than the outgoing leader.

Ms Truss is widely expected to win the leadership contest when the result is announced on 5 September.

Mr Sunak said on Thursday that he will not leave politics if he is defeated but insisted there was still “everything left to play for”.

‘Closing the stable door after horse has bolted’: PM and chancellor to meet fiscal watchdog
Mortgages withdrawn from sale as market reels after mini-budget
The Best Creed Cologne For Men: 10 Of Our Favorites To Add To Your Rotation in 2022
Tories accused of ‘energy disarmament’ as Labour mocks ’19th century’ Rees-Mogg
Stay True