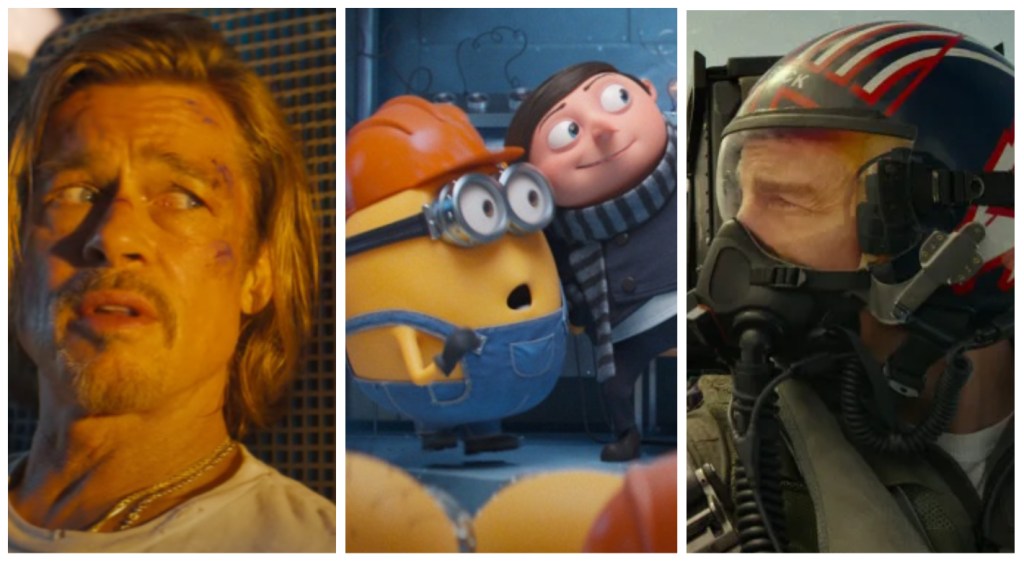 This was yet another soft weekend at the international box office with no major fresh titles and as summer fully closes out in Europe and beyond.

On the positive side, the UK’s National Cinema Day helped buoy that market with ticket prices slashed to £3 at 643 participating theaters on Saturday. There were 1.6M admissions worth about £5M — tickets in the Republic of Ireland went for 4 euros a pop and an exact monetary total has not yet been provided. However, the admissions rep almost three times the equivalent day in pre-pandemic times, according to the UK Film Distributors’ Association.

The scheme gave a boost to such films as Universal/Illumination’s Minions: The Rise of Gru and Paramount/Skydance’s Top Gun: Maverick. The latter crossing $100M in the market.

Elsewhere, as we continue to track the can-it-get-to-$1B dino-meter, Universal/Amblin’s Jurassic World Dominion is now at $994.6M global.

Running down the top titles this weekend, Sony’s Bullet Train sped into Japan and is the top studio grosser of the frame overall, adding $9.8M in 64 markets. That brings the offshore total across $100M ($109.5M) while global is nearing $200M ($195.4M). The start in Japan was $3M across four days, topping the launches of Kingsman: The Secret Service by 124% and Murder on the Orient Express by 13%. Holdovers saw a good 25% drop with Saudi Arabia up 41% and Australia and the UK off by 10% and 13%, respectively.

In China, it tops $30M this frame, after an overall sluggish weekend marked by the end of school holidays in the market. In Italy, where Gru and the crew are still No. 1, an $11.8M cume puts the origins story ahead of the lifetimes of Sing, Big Hero 6 and Zootopia.

The UK had a bounce on Saturday, boosted by National Cinema Day, resulting in a 243% uplift from the same day last week. Rise of Gru has surpassed the lifetime of Finding Dory in the market and is performing in line with both previous Despicable Me films at the same point. The UK cume is now $52.8M to lead all markets.

In IMAX the Tom Cruise-starrer is now the format’s 10th biggest title of all time worldwide with $106.6M, the split is even for domestic and overseas.

In reissues this weekend, Sony/Marvel’s Spider-Man: No Way Home snared an additional $2.6M from 20 overseas markets to lift the international cume to $1.097B. Global is now $1.908B. No Way Home continues to hold the No. 1 spot on Mexico’s all-time box office chart and is the highest-grossing superhero movie ever in 19 markets, including the UK, Mexico, Saudi Arabia, Belgium and Turkey.

In another rerelease, Steven Spielberg’s classic summer shark-er Jaws went back in the water again in select offshore markets on IMAX screens including 285 domestic screens for a global four-day weekend of $1.23M.

We’ll have an update on overall box office for Toei Animation’s smash One Piece Film: Red tomorrow, but for now, IMAX reports it has become its 3rd highest-grossing local-language release in Japan with $6.5M.

Coming up on Friday, FoxStar’s Brahmastra: Part One – Shiva opens in India, the UK, North America and other markets while Bona’s In Search of Lost Time hits China.