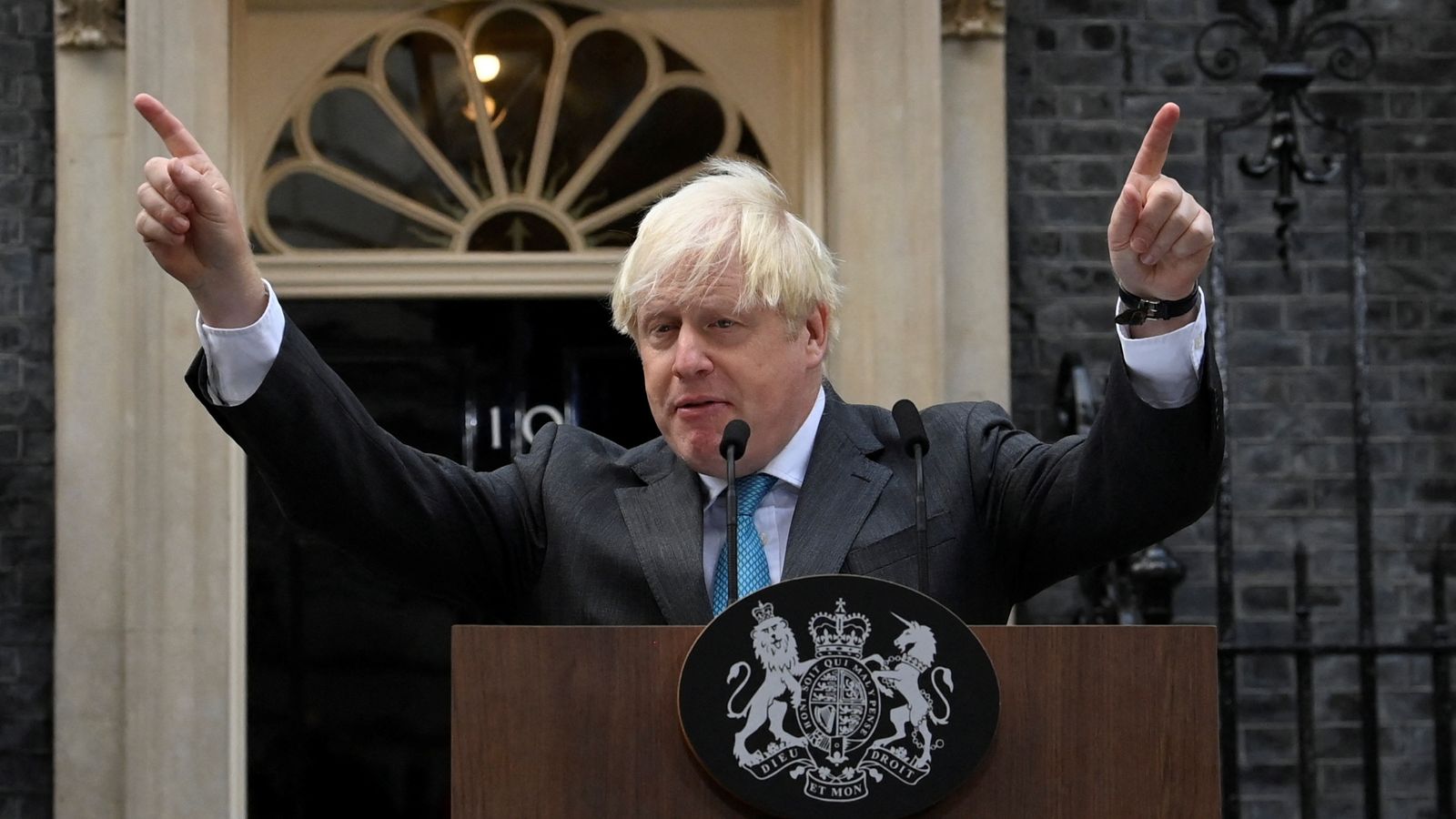 Boris Johnson has delivered his valedictory speech to the nation, describing himself as a “booster rocket that has fulfilled its function”.

Speaking outside a packed Downing Street, the outgoing prime minister said: “This is it folks.”

Mr Johnson vowed to “get behind Liz Truss every step of the way” and told the Conservative Party that “it is time to get behind” the new prime minister.

He championed his administration’s achievements, highlighting Brexit, the vaccine rollout and the response to the war in Ukraine.

He blamed President Putin for spiralling energy costs and said he knows Ms Truss and her government “will do everything they can to get through this crisis”.

Hinting at what he plans to do next, Mr Johnson said: “On the subject of bouncing around in future careers, let me say that I am now like one of those booster rockets that has fulfilled its function.

“And I will now be gently re-entering the atmosphere and splashing down invisibly in some remote and obscure corner of the Pacific.”

Referencing how he was ousted, Mr Johnson jibed that in this “relay race” of government they “changed the rules half way through”.

But he said that if Dilyn the Johnsons’ dog and Larry the No 10 cat “can put behind them their occasional difficulties, then so can the Conservative Party”.

He went on to compare himself to Cincinnatus – a Roman statesman who resigned and returned to his farm.

“Like Cincinnatus, I am returning to my plough and I will be offering this government nothing but the most fervent support,” Mr Johnson said.

Angela Rayner, the deputy leader of the Labour Party, told Sky News it was a “classic Boris Johnson speech, completely deluded about what’s happened over the last couple of years and the crisis that people are facing”.

She said there was no acknowledgement of “the scandal and sleaze that has engulfed his party and his government over the last couple of years”.

Mr Johnson was forced to resign after a wave of ministers left his government over a series of controversies, culminating in the Chris Pincher scandal.

There has been speculation that he will be defiant and plot a Trump-style comeback from the backbenches.

The outgoing prime minister will now set off for Balmoral to formally tender his resignation to the Queen before Liz Truss’s arrival.

Ms Truss was declared the winner of the Conservative leadership race on Monday and will step into the role as party leader and prime minister after she has been formally invited by the Queen to form a government.

“Boris, you got Brexit done, you crushed Jeremy Corbyn, you rolled out the vaccine and you stood up to Vladimir Putin. You were admired from Kyiv to Carlisle,” she said.

On Tuesday afternoon Ms Truss will return to Westminster, where she will address the country for the first time as prime minister before getting on with the business of appointing her ministerial team.

‘Closing the stable door after horse has bolted’: PM and chancellor to meet fiscal watchdog
Steve-O On What His Relationship With Bam Margera Is Like Post Jackass Lawsuit
Protests in Iran
The Bestselling Books of the Week, According to NYT, USA Today, Publishers Weekly, and Amazon
Truss sticks by plan but admits mistakes, and says top-rate tax cut was chancellor’s idea