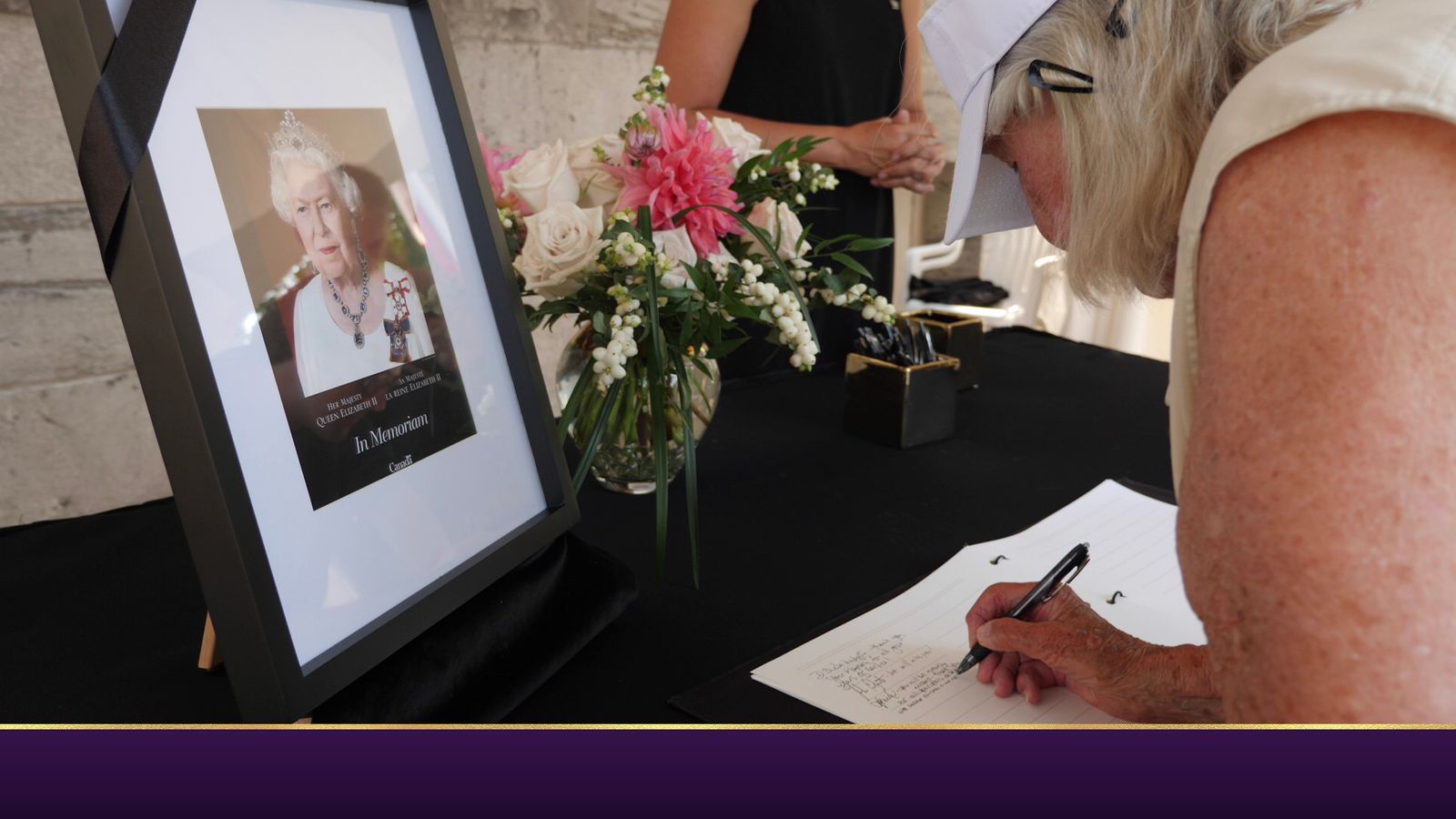 A bronze statue of Queen Elizabeth II sitting astride a horse marks the entrance to Ottawa’s Rideau Hall, a nod to a head of state and equestrienne who continued to ride well into her tenth decade.

Canada was one of 15 sovereign states of which the Queen was monarch at the time of her death, and was the country she visited most outside the United Kingdom.

On many of her 22 trips here as Queen she stayed at Rideau Hall and the grounds bear testament to this, with trees which she dedicated, including a red maple planted during her first visit as monarch in 1957.

Many of the plaques identifying these trees are now surrounded by flowers left by those who have come to pay their respects, while others signed a book of condolences. Here are some of their memories and tributes:

Braydon, from Ottawa, said: “Her death marks the end of a golden age, the age of our grandparents.

“In an ever-changing world where everything we know is sort of falling apart, she was always there.

“She was always the stability and the continuity.

“King Charles III faces a lot of difficulties going forward, there are going to be a lot of hard questions about whether he should keep the monarchy, especially here in Canada.

“But from what I’ve seen of him so far, I think the people are going to rally around him just like they did his mother.”

June Duncanson-Campbell, from Nova Scotia, said: “I just love everything about the royals, we were always monarchists in our family.

“We used to put little United Kingdom flags all on the lawn on Queen Elizabeth’s birthday.

“I never had a chance to meet her personally, sadly, but I saw her up pretty close when she visited Ottawa.

“I think to her Canada was a baby country and she could see the possibility for so many things here – she has helped Canada to grow.”

Kim McLaughlin, from Ottawa, said: “Our prime minister Justin Trudeau knew the Queen as a young child, when his dad was prime minister and we’ve seen some pictures of them together that are really quite adorable.

“For him, and to her, to have that experience of the son of a former prime minister also holding that office must have made it a really special bond.

“He felt like he really lost someone, like an extended family member. I think all of us feel that way. It’s hard to imagine a world without her and I struggle with that myself.”

Gyde Shepherd, from Ottawa, said: “My uncle was Governor General here in the in the 1950 and 60s and he had a close relationship with the Queen Liz and so I feel close to her through my uncle.

“We have lost somebody who would be the equivalent of losing Pope Francis. She was a grandmother, mother, lover and great woman. What greater woman can you think of at this present moment?”

“He has said he’s not going to make any political comments any more. But I hope he works in the background on those issues.

“I think he’ll be a good King.

“We can’t compare him to Queen Elizabeth – that wouldn’t be fair. But he’s a good man, as his father was.”

Ian Burleton, from Shropshire, said: “She was a grand lady and I think we’re going to miss her.

“I’m hoping that the crown will keep moving on and on and on.

“I know we’re having trouble with the world, but I think we just have to try to abide by the Queen’s faith and her religion.”

Milly Widdis, from Ottawa, said: “I always like to take a glance at the monarchy when they come visit Ottawa.

“I like them a lot and they are good people.

“This was one of her favourite countries.

“She had a very big connection with Canada and every time she came, she enjoyed it. When I heard she had died, I was very sad, I cried.”