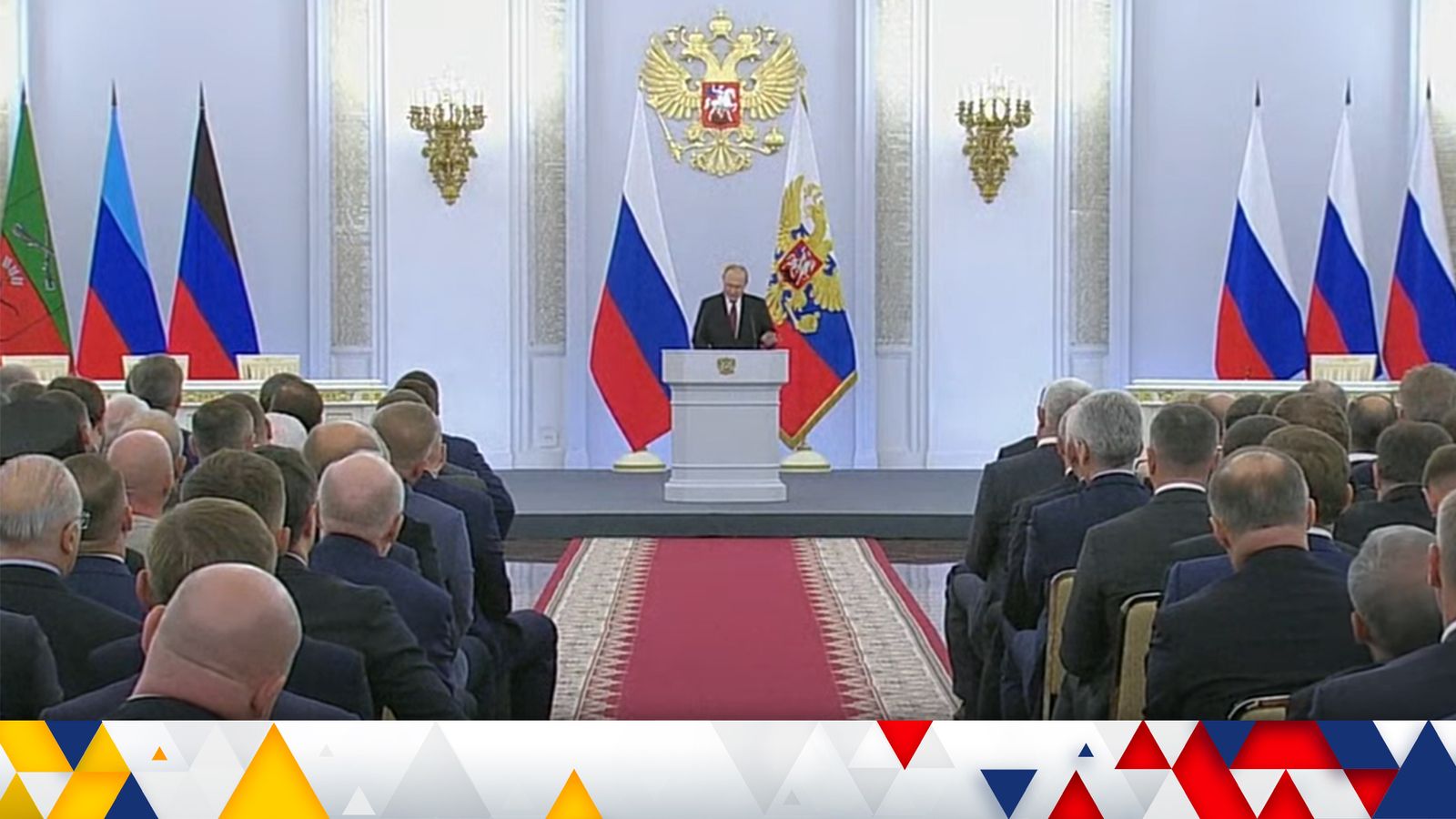 Vladimir Putin has railed against Western “dictatorship” as he declared Russian rule over four regions of Ukraine.

It is the biggest forced occupation since the Second World War, amounting to 15% of Ukrainian territory.

Russia has been “reborn and strengthened”, the Russian president claimed during a ceremony at the Kremlin.

Following a series of referendums described by Kyiv and the West as a “sham”, Mr Putin said the people of Zaporizhzhia, Kherson, Luhansk and Donetsk had “made their choice” and decided to be governed from Moscow.

The results are “definitive”, he claimed, adding: “This is the will of millions of people. This is their right, their integral right.”

He said those in the affected regions are “becoming our compatriots forever” and signed documents said to incorporate them into his country.

Earlier this week, pro-Moscow officials said 93% of the ballots cast in Zaporizhzhia were in support of annexation, as were 87% of ballots in the southern Kherson region, 98% in Luhansk and 99% in Donetsk.

What has happened is “emphasised in the principles of United Nations”, Mr Putin said, and amounted to the “self-determination of people”.

The European Union firmly condemned the move within minutes, saying it would never recognise “illegal” referendums held in Ukraine by Russian officials

It argued the referendums were a pretext for “this further violation of Ukraine’s independence, sovereignty and territorial integrity”.

Giorgia Meloni, widely expected to be named Italian prime minister next month, said Russia’s annexation of the four Ukrainian regions had “no legal and political value”.

In a statement, she said Mr Putin “once again demonstrates his Soviet-style, neo-imperialist vision that threatens the security of the entire European continent”.

UN General Secretary Antonio Guterres described the annexations as an illegal violation of the UN charter.

Mr Putin urged the “Kyiv regime to immediately cease hostilities and return to the negotiation table”.

Regarding the West, he claimed that ever since the collapse of the Soviet Union, Western countries had “decided that the world would forever have to put up with its dictates”.

He went on: “The West expected that Russia would not be able to cope with such dictates and fall apart, but Russia has been reborn and strengthened.”

Regarding the people of the Donbas (Donetsk and Luhansk) the Russian president claimed they were “victims of inhumane terrorist attacks conducted by the Kyiv regime”.

Expanding on his theme, he claimed that for years, people there had been “subjected to genocide and shelling”.

He added: “In Kherson, they tried to cultivate hatred for Russia. And, lately, the Kyiv regime threatened death and punishment to teachers.

“They were threatening repressions to the millions of people who supported Russia.”

As Mr Putin made his presentation in the Kremlin’s Georgievsky Hall, Russian forces were facing further setbacks on the battlefield.

Pro-Moscow officials have acknowledged that Russian troops are on the verge of encirclement in Lyman, their main garrison in the north of Donetsk.

Thus Ukraine could be on the way toward recapturing swathes of territory that Mr Putin has just declared to be part of Russia.

Earlier, Kremlin spokesman Dmitry Peskov said attacks against any part of the affected regions would be interpreted as acts of aggression against Russia itself.

Prime Minister Liz Truss has said the UK will never consider the regions as “anything other than Ukrainian territory”.

She added that Mr Putin had “acted in violation of international law” and had “clear disregard for the lives of the Ukrainian people he claims to represent”.

The PM continued: “Putin cannot be allowed to alter international borders using brute force. We will ensure he loses this illegal war.”

US President Joe Biden has said the referendums’ results were “manufactured in Moscow”, describing them as a “flagrant violation of the UN charter”.

The protesters on streets across China know what will follow for them
Kathryn Hahn, Husband File Petition to Add ‘Hahn’ to Kids’ Last Names
Jennifer Lopez Shares Sweet Pics From Her And Ben Affleck’s First Thanksgiving As A Married Couple
Top 10 Books of 2022
Diphtheria cases rising as migrants ‘moved from Manston with suspected infection’