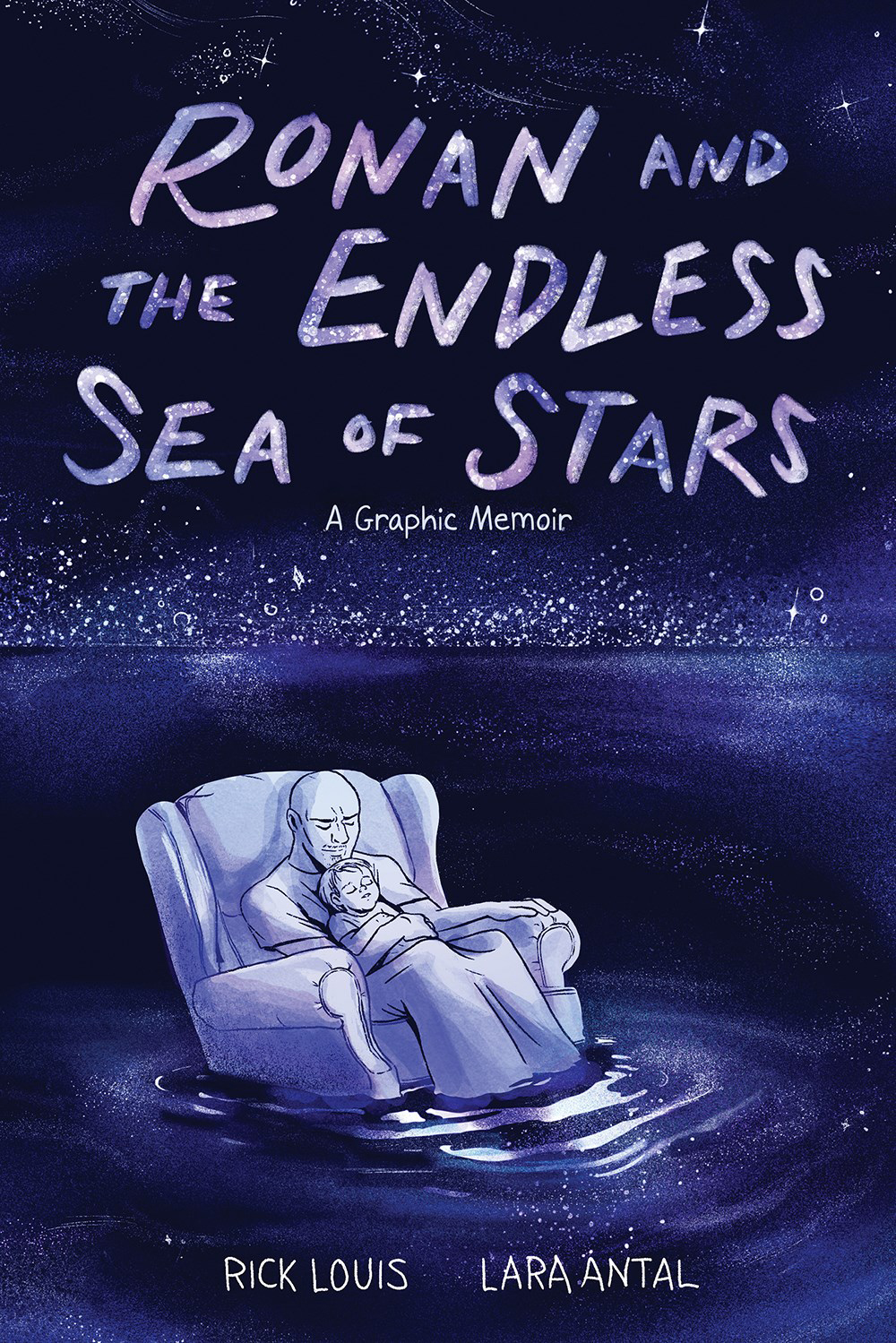 In Ronan and the Endless Sea of Stars, author Rick Louis tells the story of losing his baby son to a rare neurological illness in 2013. “This is not a story about grief,” Louis writes. “It is just the story of a little boy who was only here for a short while and what he meant to us.”

It spoils nothing to tell readers that Ronan dies; this is revealed at the book’s beginning by showing present-day Louis next to a baby-size vacant space, populated by twinkling stars. The book then moves backward in time, starting with the day Ronan was born and the joy Louis and his wife, Emily, took in him. (Emily published a bestselling memoir about Ronan in 2013 called The Still Point of the Turning World.) However, Ronan’s parents soon began to notice some health concerns, such as Ronan’s difficulty focusing his eyes, and sought medical attention. An ophthalmologist revealed that Ronan had signs of Tay-Sachs disease, a lethal condition that prevents the breakdown of lipids in the brain and nerves. When the diagnosis was confirmed, Louis and Emily had to confront their child’s mortality as they did everything in their power to enrich his life. As Ronan’s health deteriorated due to seizures and breathing difficulties, the uncertainty and strain also deteriorated his parents’ relationship.

Louis imbues this mostly tragic narrative with earnestness, quirk and even humor, paired neatly with (often silly) illustrations of what’s going on in characters’ minds. All the while, Louis holds true to telling the story of his time with Ronan with profound sincerity, reverence and honesty. Never does Louis speculate about what Ronan may have been thinking or feeling, nor does he graft personalization onto Ronan’s suffering. Instead, Louis simply recounts the horror of watching his child suffer while also expressing the pure joy of being a parent to a beautiful and unique person.

This is the first book for both Louis and illustrator Lara Antal, and they make good use of the graphic memoir form by pairing a cinematic, moving tale of family and loss with expressively drawn faces. Viewing the pain in Louis’ and Emily’s faces as they contemplate their child’s death is almost as haunting as watching the life drain from Ronan’s eyes as his disease progresses. Recurring abstract images, such as gently coiling swirls of black and sheets of ombre static, populate backgrounds, faces and even trees. These convey emotional heft in a way that is more gut-centered than paragraphs of prose about a character’s feeling.

In a culture where grief is treated as something to avoid at all costs and dispose of quickly, this book provides a valuable counterpoint. Carrying an eternal love for someone who has died is, for Louis, as vital as it is excruciating. For those who have known profound grief, or those willing to expand their understanding of its nuances, Ronan and the Endless Sea of Stars will be a valuable read.

‘I was not given a realistic chance’, says Liz Truss, as she makes comeback
FTSE 100 reaches all-time high
Inside the ‘Wormhole,’ Relativity Space’s monster factory 3D-printing reusable rockets
Liz Truss rules out future PM bid but ‘doesn’t regret’ her short time in No 10
Dress Code: Athlete