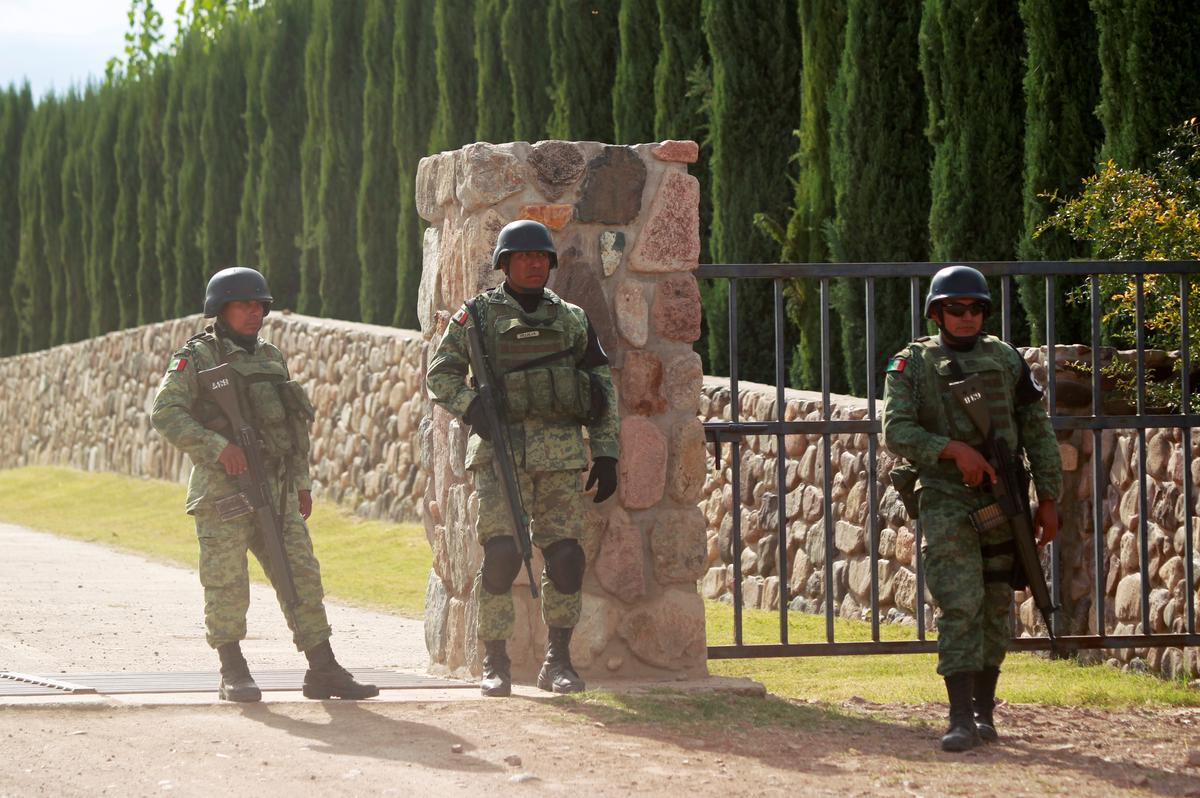 LA MORA, Mexico (Reuters) – The massacre of nine women and children in northern Mexico could test breakaway Mormon families’ attachment to communities that for decades have been a haven for a way of life shunned by the mainstream Church of Jesus Christ of Latter-Day Saints.

Soldiers assigned to National Guard keep watch outside the properties of Mexican-American Mormons that were killed in Bavispe, as part of an ongoing security operation by the federal government, in La Mora, Sonora state, Mexico November 6, 2019. REUTERS/Jose Luis Gonzalez

Monday’s dirt road ambush of three families of Mormon origin was the deadliest attack on U.S. citizens in Mexico in recent memory and put the close-knit religious communities in the uncomfortable spotlight of the country’s raging drug war.

The victims – three women and six children – came from prominent local families, including the LeBarons and Langfords, dual citizens of both Mexico and the United States, like most residents of the handful of Mormon settlements in the area that date back decades.

Nestled in the fertile valleys of the Sierra Madre mountains just a few hours drive south from the U.S. border, the oldest communities stem from the late 1800s, when upheaval over polygamy in the Utah-based church led to their founding.

“We had full confidence, and full trust, completely fearless, we’d lived there for 70 to 80 years in absolute peace and prosperity,” said Lafe Langford, 33, a friend and relative of the victims.

He described the farms, carpenter shops and sawmills of La Mora, the village where the victims lived, as a “paradise for children,” with 350 full-time residents, and another 1,000 who, like him, shuttle between the United States and Mexico.

Born and raised in La Mora, he said he had been planning to move back permanently from the United States but could not focus on that now due to feelings of shock and sadness.

Aurora LeBaron, 26, who lives in the United States, recalled spending several years as a young girl in Colonia LeBaron, a nearby community, and returns frequently.

“I remember having so much freedom, going down the street, everyone was my family,” she said, describing surrounding pecan orchards. “I remember feeling really free and safe.”

Peace has not always reigned among local families.

In 1980, a member of the LeBaron family, Ervil, a polygamist who founded an offshoot community in the Mexican state of Baja California, was jailed for ordering the murder of another Mormon leader and blamed for inspiring followers to commit many more.

The communities date back to a time when the U.S. government was cracking down on polygamy in Utah in the early 1880s, prompting Mormon leaders to send pioneer families to establish colonies of “true believers” in Canada and Mexico, according to Jon Krakauer, who detailed the history of the fundamentalist communities in his book “Under the Banner of Heaven.”

“They went to these remote corners where they wouldn’t be bothered,” he said, adding that the settlements have marriage ties to others in the United States. They include the fundamentalist Arizona community of Short Creek once led by Warren Jeffs, convicted in 2011 of child sexual assault stemming from his marriage to two underage girls.

Short Creek has direct links to the LeBarons through marriage, Krakauer said, citing research done for his book.

Like Krakauer, John Hatch, a local historian and third-generation resident of the nearby community of Colonia Juarez, home to a mainstream Mormon community, bemoaned the violence.

Hatch said the LeBarons and the Langfords were intermarried and that some still believed in polygamy, contrasting them with Mexico’s estimated 1.5 million mainstream Mormons, the religion’s biggest concentration outside the United States.

Calling Colonia LeBaron and La Mora fundamentalist communities, Aurora LeBaron said there were still some people in LeBaron who believed in polygamy, but increasingly few.

“It’s not demonized, but it’s not so practiced,” she said. “We have seen very good examples of people living it.”

Amber Bostwick, 35, told Reuters she was conceived in Colonia LeBaron and that her mother gave birth to her in Sandy, Utah at the age of 15 when her father, a polygamist, was in his 30s and still living in Mexico.

“My family have been generational polygamists all the way back to (founder of Mormonism) Joseph Smith and my mother was raised in this,” said Bostwick, who now lives outside Seattle and has not returned to the communities since she was a child.

Langford, for his part, disputed that the separate La Mora community is fundamentalist, though he said some members are related to or have married into fundamentalist families.

Asked whether his faith in Mexico had been shaken by the attack, historian Hatch in Colonia Juarez said he had no intention of moving away.

“I have always felt safe here,” he said. “We’ve been very blessed and we’ve even heard it stated that the cartels have been told, ‘Hey, don’t mess with those people. Leave them alone.’”

Record number of jobs being advertised – with actors and dancers in high demand
Sir Robert Buckland becomes first cabinet minister to swap sides in Tory leadership race
ISRO Completes LEM Test Ahead of Gaganyaan Project, Launches SPARK Virtual Space Museum: Details
“I will do what I can for damage control”: Abortion Information Misinformation within Oklahoma City’s METRO Library
Julia Fox Has Been Wearing Merrell Clogs All Summer, and They’re on Sale Right Now