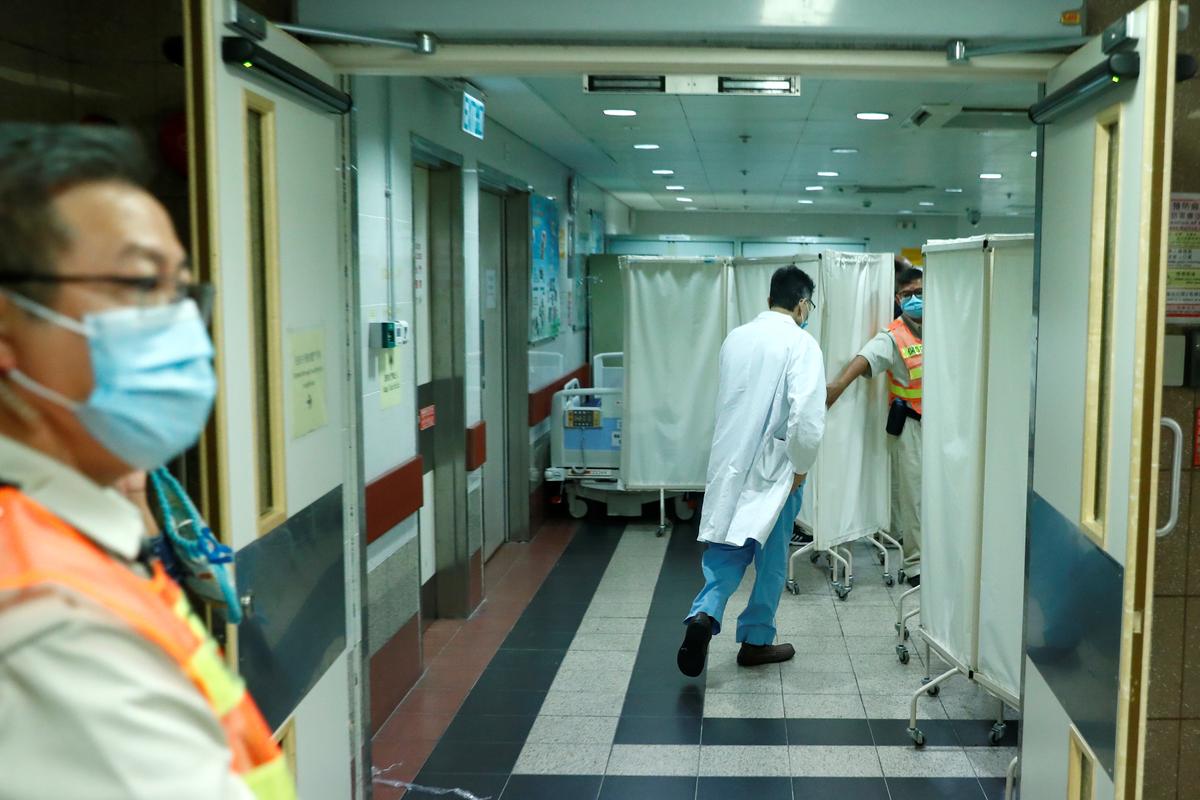 HONG KONG (Reuters) – A student at a Hong Kong university who fell during protests at the weekend died early on Friday morning, marking the first student death during the anti-government demonstrations that have roiled the city and set the stage for fresh unrest.

A member of the medical staff enters the Intensive Care Unit at Queen Elizabeth Hospital that treated the university student who fell during a protest in Hong Kong, China November 8, 2019. REUTERS/Thomas Peter

The Hospital Authority confirmed that Chow Tsz-lok, 22, an undergraduate student at the Hong Kong University of Science and Technology, had died of injuries.

Chow’s death is expected to spark fresh protests and fuel anger and resentment against the police, who are already under immense pressure amid accusations of excessive force as the city grapples with its worst political crisis in decades.

Demonstrators had thronged the hospital over this week to pray for Chow, leaving flowers and hundreds of get well messages on walls and notice boards inside the building. Students also staged rallies at universities across the former British colony.

“Wake up soon. Remember we need to meet under the LegCo,” said one message, referring to the territory’s Legislative Council, one of the targets of the protest rallies. “There are still lots of things for you to experience in your life.”

Another read: “Please add oil and stay well,” a slogan meaning “keep your strength up” that has become a rallying cry of the protest movement.

Students and young people have been at the forefront of the hundreds of thousands who have taken to the streets since June to press for greater democracy, among other demands, and rally against perceived Chinese meddling in the Asian financial hub.

The circumstances of how Chow received his injuries were unclear but police said he was believed to have fallen from one floor to another in a parking lot during weekend crowd dispersal operations in a district east of the Kowloon peninsula.

The protests, ignited by a now-scrapped extradition bill for people to be sent to mainland China for trial, have evolved into wider calls for democracy, posing one of the biggest challenges for Chinese President Xi Jinping since he took charge in 2012.

Protesters have thrown petrol bombs and vandalized banks, stores and metro stations, while police have fired rubber bullets, tear gas, water cannon and, in some cases, live ammunition in scenes of chaos.

In June, Marco Leung, 35, fell to his death from construction scaffolding after unfurling banners against the extradition bill. Several young people who have taken their own lives in recent months have been linked to the protests.

Notices circulated on social media prior to Chow’s death said students planned a march on Friday at the Hong Kong University of Science and Technology. Others called for people to rally at 1200 GMT at the site where Chow fell.

Schools also plan a rally in the eastern district of Kwun Tong, protesters said in advertisements.

Protests scheduled over the weekend include ‘Shopping Sunday’ centered on prominent shopping malls, some of which have previously descended into chaos as riot police stormed areas crowded with families and children.

FILE PHOTO: A student from the Hong Kong University of Science and Technology holds up a sign during a forum on fellow injured student Chow in Hong Kong, China, November 6, 2019. REUTERS/Shannon Stapleton

Last weekend, anti-government protesters crowded a shopping mall in running clashes with police that saw a man slash people with a knife and bite off part of the ear of a local politician.

Hong Kong returned to Chinese rule in 1997 under a “one country, two systems” formula, allowing it colonial freedoms not enjoyed on the mainland, including an independent judiciary and the right to protest.

China denies interfering in Hong Kong and has blamed Western countries for stirring up trouble.

‘Communist Party, step down!’: Rare protests in China as anger grows over COVID lockdowns and fatal fire
“You Are Love” delivers on the sheer physical rush of dance music, as HAMX holds nothing back
Inflation-busting pay rises for public sector workers ‘unaffordable’, says minister
‘Putin is a monster’: UK must help punish Russian war crimes, Ukraine’s first lady says
The protesters on streets across China know what will follow for them