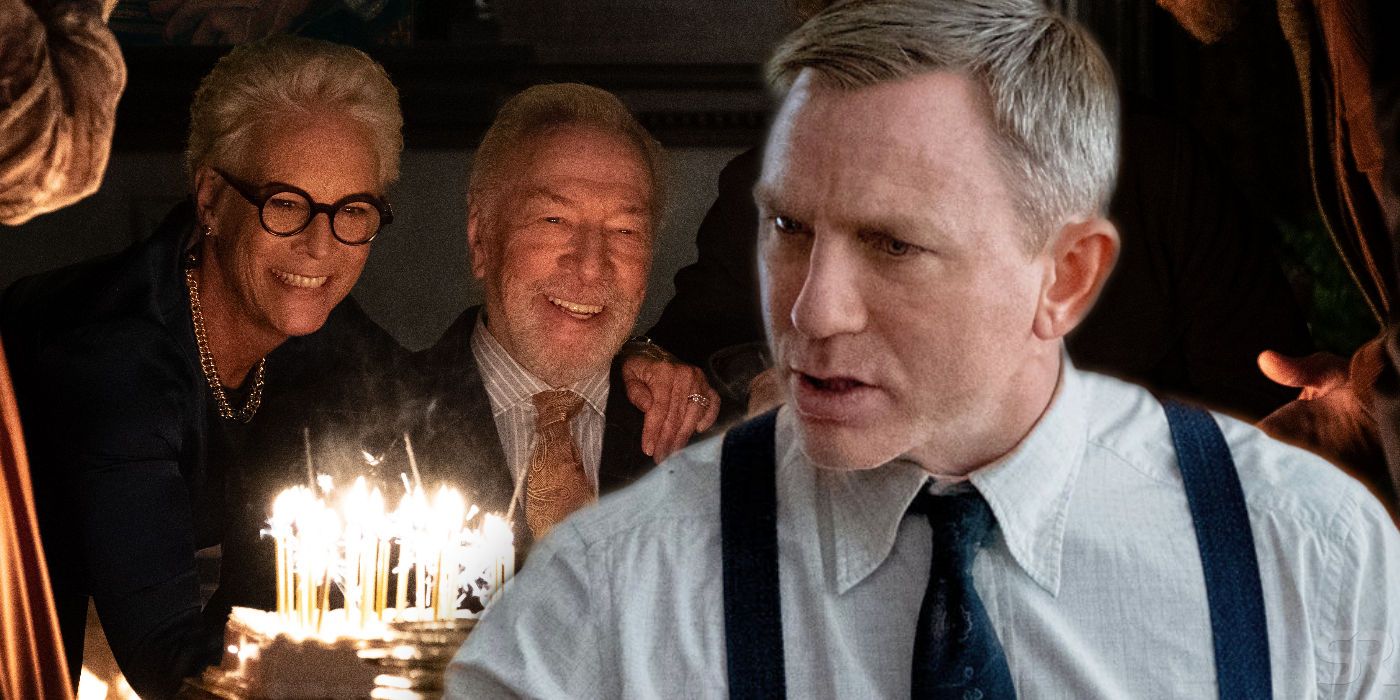 Warning: MAJOR SPOILERS for Knives Out.

Rian Johnson’s Knives Out has a twist unveiling the real killer in the movie, and there are quite a few clues leading up to the reveal. The film follows the fictional Thrombey family, led by wealthy mystery writer and patriarch Harlan Thrombey (Christopher Plummer) who invites his family to his home to celebrate his 85th birthday. But the morning after, Harlan is found with his throat slashed in his room. Despite the initial ruling of suicide, Detective Benoit Blanc (Daniel Craig) quickly discovers potential motives for many of Harlan’s family members.

Continue scrolling to keep reading
Click the button below to start this article in quick view.
advertising

It’s set up as a classic whodunit mystery in the realm of Agatha Christie and Clue, but that trajectory quickly veers off course as the “killer” is revealed quite early in the film. Within the first act, we see that Harlan’s nurse, Marta Cabrera (Ana de Armas), mistakenly gives Harlan 100 milligrams of morphine, mixing the vial up with his medicine. In order to protect Marta from being considered a suspect – her mother is an illegal immigrant, and would be deported if she was found out – Harlan gives her instructions on how she can create a firm alibi, before slitting his own throat to appear as if he killed himself. It is later revealed that Harlan took his entire family out of the will, instead leaving everything to Marta, upping the stakes as she tries to keep her secret.

But that’s far from the end of the mystery. In Knives Out‘s ending we learn that Ransom (Chris Evans) orchestrated Harlan’s death. Upon learning that he was cut out of the will and Marta would receive everything, he swapped the labels on the morphine and medicine bottles before removing the counter-agent, knowing if she was accused of killing Harlan, she would lose her right to the will. Additionally, with the bottles swapped, Marta did in fact give Harlan the right medicine, unbeknownst to her due to the swapped labels. But once Harlan is revealed to have died by knife rather than overdose, Ransom secretly hires Blanc to investigate, hoping the detective would uncover the bread crumbs he created. The clues to Ransom’s involvement are well-hidden - but they are there.

At the outset of the film, Blanc interviews several family members, at which point flashbacks show conversations they had with Harlan on the night he died. Each reveals their potential motive – we see the moments where Harlan fires his son Walt (Michael Shannon) from the company, confronts his son-in-law Richard (Don Johnson) about cheating on his daughter Linda (Jamie Lee Curtis), and tells his daughter-in-law Joni (Toni Collette) he is cutting her off. Each scene systematically sets the viewer up to understand what each character’s motive might be if they had something to do with it.

However, while Ransom also interacts with Harlan on the night of his death, all that’s shown on camera is an ominous shot of him storming out of Harlan’s study, then leaving the party early. The family members do raise a bit of suspicion – Walt mentions that Ransom is the “black sheep” of the family – but his conversation with Harlan is the only one the viewer doesn’t get to hear first hand. Near Knives Out‘s midpoint, when Ransom returns to the house for the reading of the will, it is revealed that Walt’s son heard the conversation from a nearby bathroom, but only tidbits – notably the phrase, “I’m warning you.”

The conversation is only shown on camera right before the big reveal. Harlan not only tells Ransom he is cutting him out of the will, but also that he has chosen to leave everything to Marta. Ransom is the only family member who was aware that Marta would receive everything, which gives him a reason to frame her for the murder that nobody else has. Johnson purposefully left key details of Ransom’s story out of the script until the very end – which could have raised suspicion in hindsight. Furthermore, when the will was being read aloud, Ransom was laughing because he already knew about it; he was the only person who wasn’t shocked during the reading.

In the moment Harlan believes he is going to overdose and die, the shrewd mystery writer gives Marta very specific instructions on how she can escape the house and avoid suspicion. First, she must make it clear that she left the house before his death by announcing the time as she passes Walt on the way to her car. Then, she must sneak back into Harlan’s room by climbing up the side of the house, dress in Harlan’s clothing, and walk down to the kitchen so Walt believes he sees Harlan after Marta leaves. Finally, she must sneak out the way she came by climbing back down the side of the house. Most importantly, she can’t be seen by anyone else.

The plan almost works to perfection, but as she is climbing back down the side of the house, the elderly “Great Nana” Wanetta Thrombey, Harlan’s mother, is staring out the window and sees her. However, it appears she mistakes her for Ransom, saying, “Ransom, you’re back again?” Marta believes this is due to her being senile, and runs away, thinking she is in the clear. But Great Nana is shown early on taking note of Ransom’s whereabouts. In the scene where he storms out of Harlan’s study, she is standing by the door, and asks ”Ransom, are you leaving?” Which means she isn’t quite as out of it as Marta thinks. So why would she think Marta was Ransom? And if she thought it was him, why would she wonder if he’s back “again“?

Great Nana later tells Blanc that she saw Ransom return to the house before Marta. Like her, he snuck up the side of the house to switch the labels on the bottles. And as he was climbing back down, he ran into her in the same way Marta did – staring out the window. In that flashback, she says, “Ransom, are you back?” So while she may have been confused while seeing Marta, she did in fact see Ransom climbing down the house. Which is why she asked if “he” was back ”again.”

The Dogs Were Barking At Ransom

Harlan’s dogs are an important motif in the film. The very first shot shows the dogs running into the frame in front of a still image of the house, signifying their importance from the get-go. When Blanc first meets Marta, he comments on their docile attitude towards her, stating that dogs are the best judge of character. This point is further driven home when Harlan relays his instructions to Marta as they are plotting her alibi – she needs to sneak back in, and he mentions that they won’t bark at her. By contrast, when Ransom shows up, they bark at him incessantly, implying that he is a man of low character.

At the outset of Knives Out, Linda, who is a light sleeper, reveals three disturbances on the night of Harlan’s death that woke her up. First, she heard a loud thump coming from Harlan’s room. Originally, Harlan claims it was him knocking over a Go board, but it was really Marta tripping to the ground as she tried to get Harlan help for his impending overdose. Second, Linda heard Harlan walking down to the kitchen for a midnight snack – but this was really Marta dressed in Harlan’s clothing. Both of these details are explained in the early reveal.

The final disturbance, however, is not explained until the end. Linda tells Blanc she woke up a third time after hearing the dogs barking – this being after Harlan died and Marta had already left the property. The film brushes this aside, leaving the viewer to think it was just a random occurrence. But Ransom needed to go back to the house after Harlan’s death to return the counter-agent and further incriminate Marta. And as he tried to do so, the dogs started barking at him, since they don’t like Ransom. So that seemingly minor detail turns out to be quite important.

Ransom’s real first name is not Ransom – it’s Hugh, and this is mentioned at one seemingly minor moment near the beginning. When his character is introduced, he says that only “the help” calls him Hugh, referring to the housekeeper Fran. This turns out to be critical. Marta receives a blackmail note from someone who claims to know her secret. The blackmailer instructs her to go to a laundromat, where Fran is slumped a chair, overdosing on morphine in the same way Harlan was supposed to have done. As Fran is dying, she appears to whisper to Marta, “you did this,” implying she was onto her and was going to expose her.

In reality, she was onto Ransom, having been in the house during the funeral as he was switching the medicine labels back. But since she was the “help,” she didn’t refer to him by that name – she was instructed to call him Hugh. So Fran was actually trying to say, “Hugh did this.” Anyone who was sharp enough to remember that important early detail might have caught it. For everyone else, it likely went straight overhead.

Next: Everything We Know About A Knives Out Sequel

Popcaan Shares Video for New Song “Next to Me”: Watch
RXMIRO Flaunts House Anthem On “heart i”
Dress Code: Squire
Elon Musk claims Apple has threatened to remove the Twitter app
Musk would back Trump rival in 2024 election – with former president under fire for dining with white supremacist