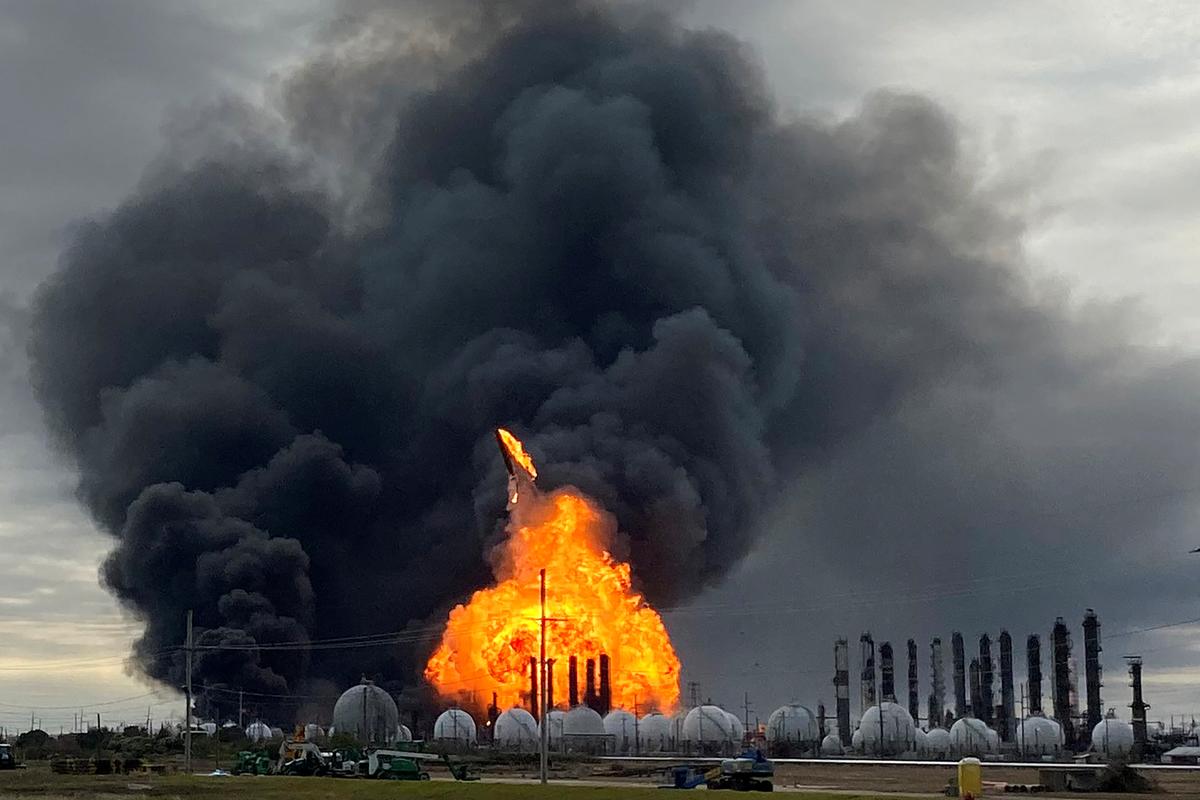 (Reuters) – A major fire at a Texas petrochemical plant continued to burn for a second day on Thursday, with the 60,000 people forced to evacuate still uncertain as to whether they could return home in time to celebrate the Thanksgiving holiday.

A process tower flies through air after exploding at the TPC Group Petrochemical Plant, after an earlier massive explosion sparked a blazeÊat the plant in Port Neches,ÊTexas, U.S., November 27, 2019.Ê REUTERS/Erwin Seba

The fiery blast inside a distillation column at the Port Neches, Texas, TPC Group facility on Wednesday injured three workers, blew locked doors off their hinges and spewed a plume of toxic chemicals for miles (kilometers).

The plant manufactures petrochemicals used to make rubber and resins, and the volatile organic compounds in the explosion’s smoke can lead to eye, nose and throat irritation, shortness of breath, headaches and nausea, the pollution regulator Texas Commission on Environmental Quality (TCEQ) said. No impact to water was reported.

The plant, 90 miles (145 km) east of Houston, has a long history of environmental violations and has been out of compliance with federal clean air laws for years, according to the Texas Tribune and state records; it was also declared a high priority violator by the Environmental Protection Agency.

TPC spokesperson Sara Cronin said that it was uncertain when the fire would be extinguished or the chemicals burned off but pointed the public to the company’s emergency response website at www.portnechesresponse.com.

The explosion was the fourth major petrochemical fire in the region this year.

Early on Wednesday morning, people more than 30 miles (48 km) away from the complex were shaken awake by the 1 a.m. CT (0700 GMT) blast, sources familiar with the fire-fighting and rescue operations said.

The blast collapsed a roof over the plant’s control room, sending workers fleeing, and damaged its fire-fighting system.

Some homes close to the plant also sustained heavy damage, and police went door-to-door early in the morning to check if residents were injured, said the Jefferson County Sheriff’s Office.

US car dealer Lithia Motors unmasked as mystery bidder for Pendragon
Starmer insists his ‘radical’ energy plan is ‘real answer’ to crisis
Cloud stocks are rallying after a punishing start to the year as 2022 outlook brightens
Barnes & Noble Huge 50% Off Sale
When Calls the Heart: Hallmark Confirms Season 10 Delay