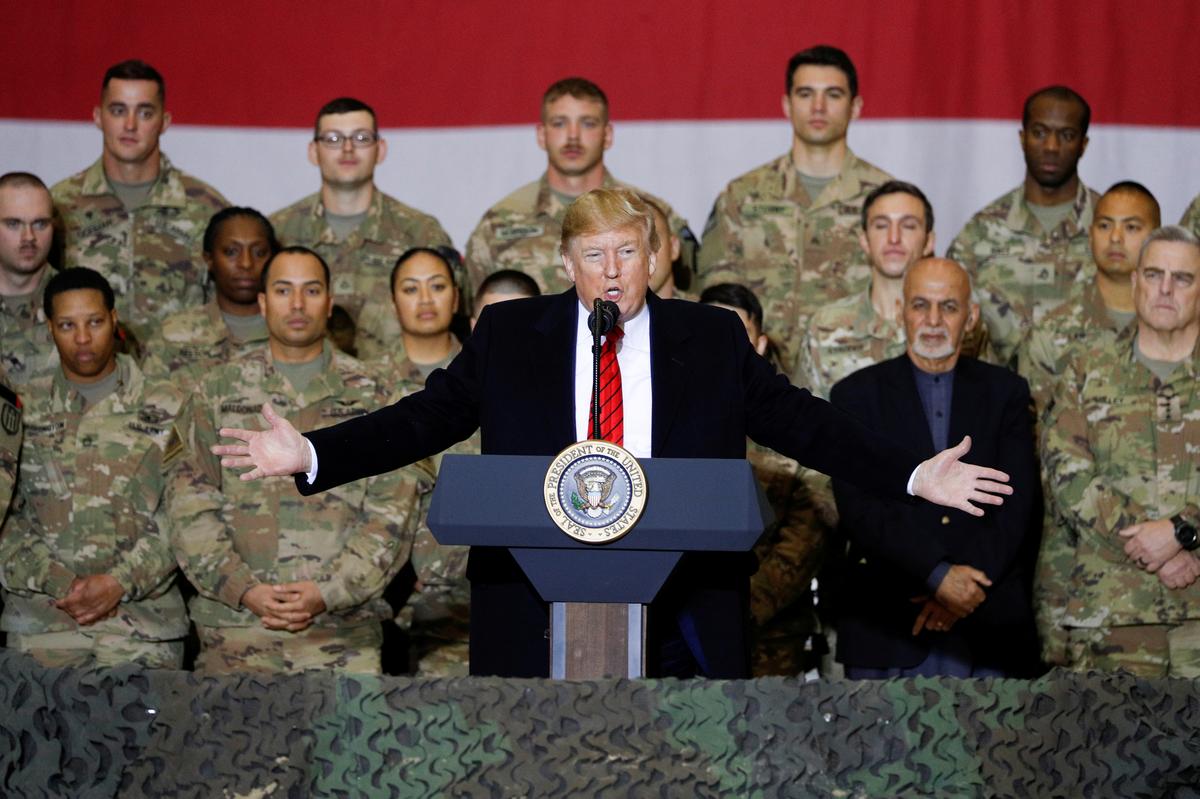 BAGRAM AIRFIELD, Afghanistan (Reuters) – President Donald Trump made a surprise Thanksgiving visit to U.S. troops in Afghanistan on Thursday and said he believed Taliban insurgents would agree to a ceasefire in America’s longest war.

Trump’s visit was his first to Afghanistan since becoming president and came a week after a prisoner swap between Washington and Kabul that has raised hopes for a revival of peace agreement.

“The Taliban wants to make a deal and we are meeting with them,” Trump told reporters after arriving in Afghanistan after an overnight flight from the United States, kept secret for security reasons.

Taliban leaders have told Reuters that the group has again been holding meetings with senior U.S. officials in Doha since last weekend, adding they could soon resume formal peace talks.

The Air Force One presidential plane touched down at the sprawling Bagram Airfield with White House national security adviser Robert O’Brien, a small group of aides and Secret Service agents, and a pool of reporters.

Trump met with Afghan President Ashraf Ghani and served turkey to some U.S. troops before sitting down to eat Thanksgiving dinner with them. He chatted and had his picture taken with some of the U.S. forces deployed there.

Trump was greeted upon his arrival by U.S. Army General Mark Milley, chairman of the Joint Chiefs of Staff. Milley said on Wednesday that the chances of a successful outcome from peace talks on ending the 18-year war in Afghanistan were higher than before and could happen in the “near term.”

Trump has long wanted to end U.S. involvement in Afghanistan – since his days as a presidential candidate – as well as in other protracted overseas conflicts and to force allies to pay more of the costs that he says fall disproportionately on American taxpayers.

There are currently about 13,000 U.S. forces as well as thousands of other NATO troops in Afghanistan, 18 years after an invasion by a U.S.-led coalition following the Sept. 11, 2001, al Qaeda attacks on the United States.

A draft accord agreed in September would have seen about 5,000 American troops withdrawn over coming months in exchange for guarantees that Afghanistan would not be used as a base for militant attacks on the United States or its allies.

The U.S. military has said it can go down to 8,600 troops and still carry out an essential counter-terrorism mission in a country where both al Qaeda and Islamic State fighters would continue to pose a threat even after any Taliban peace deal.

Trump acknowledged U.S. troop levels were “substantially” coming down but did not provide a specific number.

“We’re going to stay until such time as we have a deal or we have total victory, and they want to make a deal very badly,” Trump.

Earlier this month the Afghan Taliban released American and Australian university professors held hostage for more than three years, lifting hopes for a peace push that Trump himself declared dead earlier this year.