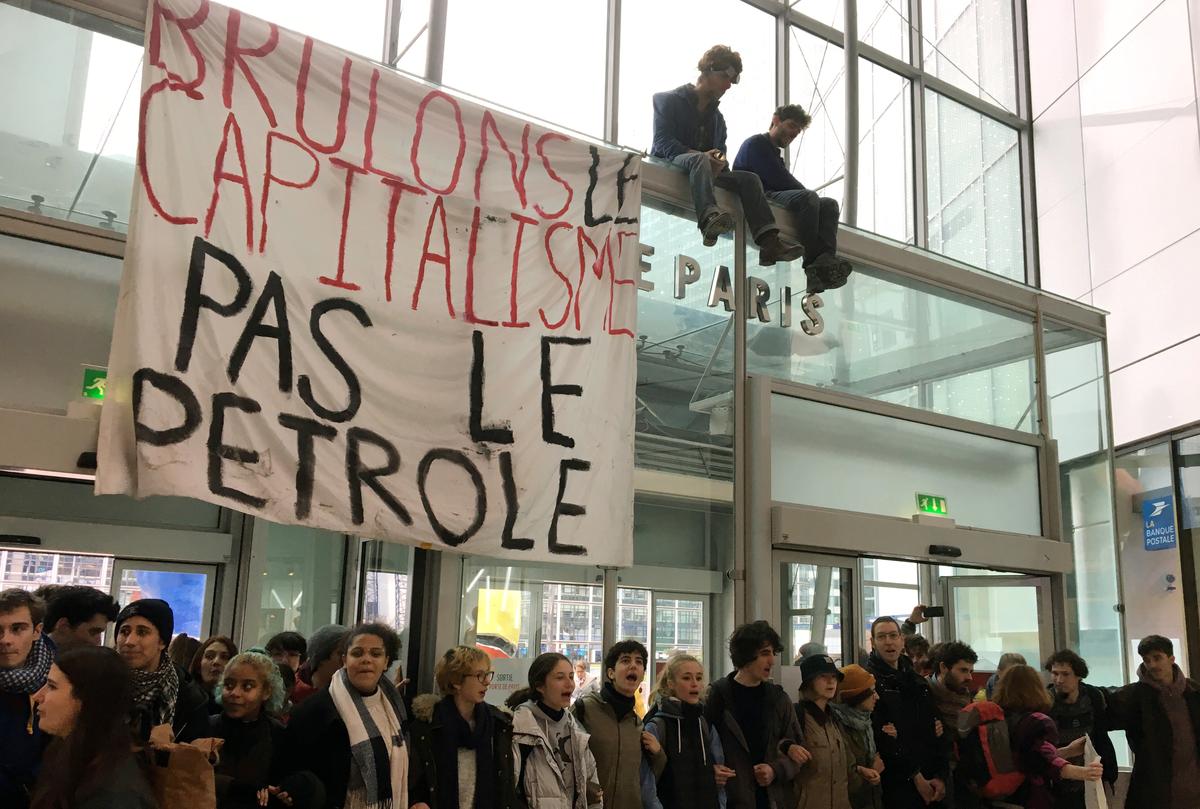 PARIS (Reuters) – Activists staged protests against online retailer Amazon around France on Friday and tried to blockade a shopping mall in Paris, denouncing the rampant consumerism of the U.S. Black Friday shopping frenzy that has spread to European shores.

Youth for Climate activists block the entrance of the Westfield Les 4 Temps shopping center as part of a day of protest to denounce the annual Black Friday shopping frenzy at La Defense business and financial district in Puteaux near Paris, France, November 29, 2019. The slogan reads “Let’s burn capitalism, not oil”. REUTERS/Noemie Olive

French companies have embraced the discount shopping day held the day after the U.S. Thanksgiving holiday since it was brought to Europe by Amazon and others. However, there has also been a backlash, driven in part by environmental concerns.

In Spain, protesters also put up a banner in the heart of Madrid that read: “Consumerism = climate crisis.”

Several dozen demonstrators gathered at dawn outside an Amazon (AMZN.O) headquarters building in the Clichy district of Paris for a sit-down protest outside the front gates. They held up a sign saying: “No to Amazon and its world.”

Manon Aubry, a left-wing member of the European parliament, said the protest was intended to “denounce the social, environmental and fiscal damage from Amazon.”

“From the streets to parliament, we continue to fight against the impunity of the multinationals,” she wrote on Twitter.

According to social media posts from Attac, a group that campaigns for more democratic globalization, there was also a sit-down protest outside an Amazon logistics center near Lyon, in eastern France.

Video posted online by Attac showed police in riot helmets picking up activists and hauling them away. The Lyon protesters had erected a sign saying: “Amazon … Stop expansion, Stop Over-production!”

In a e-mailed statement, Amazon France said it respected the rights of people to express their opinions but that did not extend to organizing violent demonstrations where people work.

“The demonstrators and Attac are throwing around untrue allegations based on factual errors and are pointing the finger at Amazon for political ends,” it said.

Some 40 young protesters attempted to block the doorway of a large shopping center in La Defense business district in Paris on Friday morning by locking arms, though passers by were still able to get through.

The demonstrators, who also gathered outside shops inside the mall, chanted “Work, consume and shut up, that is the message given to our youth”.

“We’re changing Black Friday into Block Friday, it is a symbol of capitalism,” said one of the protesters, Raphael.

“Black Friday is one of the top sales days of the year and it allows us to smooth out Christmas shopping over a longer period rather than compressing all those sales in the Dec. 10 to 24 period. It does not necessarily lead to more consumption,” he told French broadcaster BFM TV.

The amendment is part of a new law aimed at cracking down on waste, which will push companies to recycle unsold goods. It is not clear how misleading advertising will be defined or penalized.

The text of the amendment described Black Friday as a “vast operation for the glorification of consumerism imported from the United States.”

Additional reporting by Geert De Clercq and Noemie Olive in Paris and Ashifa Kassam in Madrid; Editing by Christian Schmollinger and Mark Potter

‘I have no other option’: Migrants fill up squalid camp and wait for boats to reach English shores
Jennifer Lopez Announces First New Album in Nine Years, This Is Me… Now
Meet Me in the Bathroom Is a Time Capsule of 2000s Indie Rock
Grayscale refuses to share proof of reserves due to ‘security concerns’ as shares trade at a 45% discount to bitcoin
15 Best Aluminum-Free Deodorants For Men: Great Natural Alternatives 2022