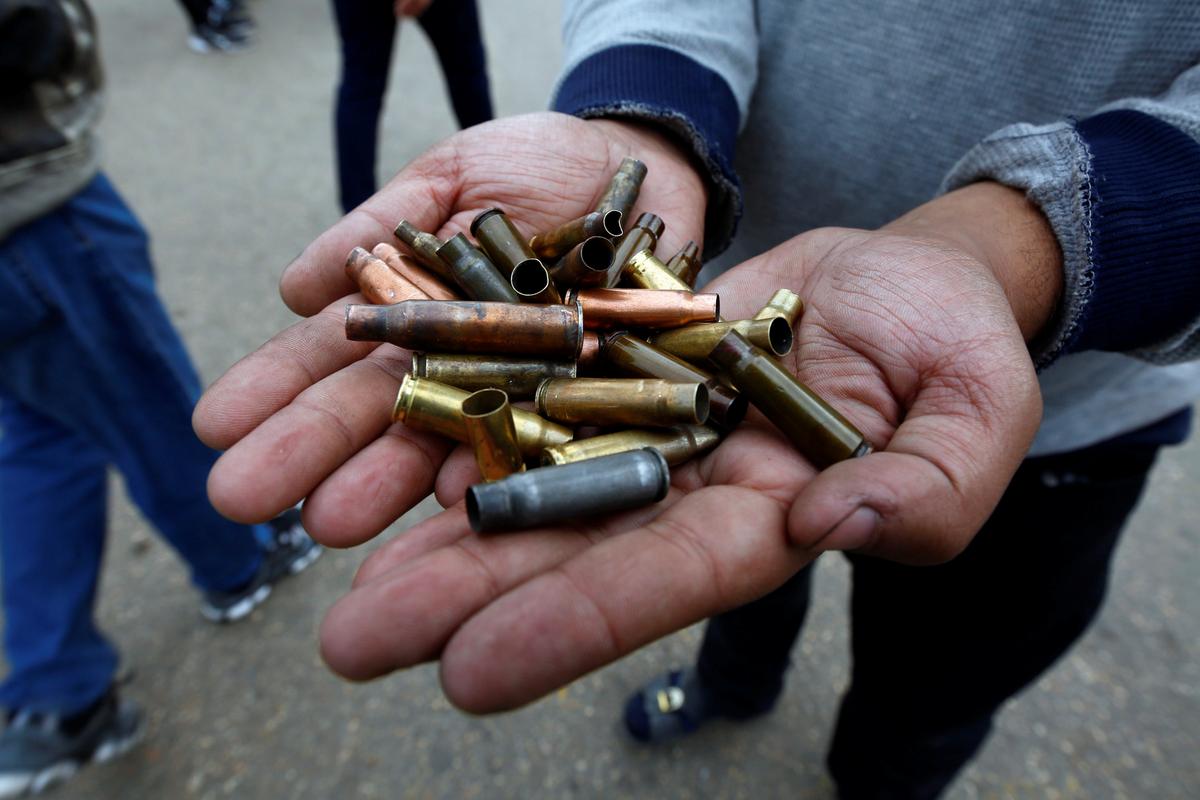 BAGHDAD (Reuters) – Iraq’s top Shi’ite Muslim cleric on Friday condemned attacks on protesters and urged lawmakers to reconsider their support for the government, an apparent suggestion that they seek a change of leadership as violence spirals in the war-weary country.

A man shows the casings from bullets which were allegedly used against protesters who were killed at an anti-government protest overnight in Najaf, Iraq November 29, 2019. REUTERS/Alaa al-Marjani

Grand Ayatollah Ali al-Sistani made his remarks after the bloodiest day in weeks of anti-government unrest where security forces have shot dead hundreds of protesters and clashes have begun to escalate in southern provinces.

The government “appears to have been unable to deal with the events of the past two months … parliament, from which the current government emerged, must reconsider its choices and do what’s in the interest of Iraq,” a representative of Sistani said in a televised sermon.

Sistani said attacks on peaceful protesters were “forbidden” but also urged demonstrators to reject violence, two days after protesters burned down the Iranian consulate in the southern holy city of Najaf.

Protesters “must not allow peaceful demonstrations to be turned into attacks on property or people,” he said.

The burning of the Iranian consulate in Najaf on Wednesday sparked an escalation of violence.

On Thursday, security forces shot dead 46 people in another southern city, Nassiriya, 12 in Najaf and four in Baghdad bringing the death toll from weeks of unrest to at least 408, most of them unarmed protesters, according to a Reuters tally from medical and police sources.

Iraq’s “enemies and their apparatuses are trying to sow chaos and infighting to return the country to the age of dictatorship … everyone must work together to thwart that opportunity,” Sistani said, without elaborating.

The unrest is Iraq’s biggest crisis for years. Protesters demand the departure of a Shi’ite-dominated ruling elite backed by Iran which has held power since the U.S.-led invasion and overthrow of Sunni dictator Saddam Hussein in 2003.

Worst result for Tories in Chester for nearly 200 years as Labour comfortably wins by-election
The Strokes Announce New Vinyl Box Set of Singles
Elon Musk shows off updates to his brain chips and says he’s going to install one in himself when they are ready
The Best Books of the Year, According to Oprah Daily
Broke and down to one credit card: Former FTX CEO Sam Bankman-Fried claims he committed no fraud