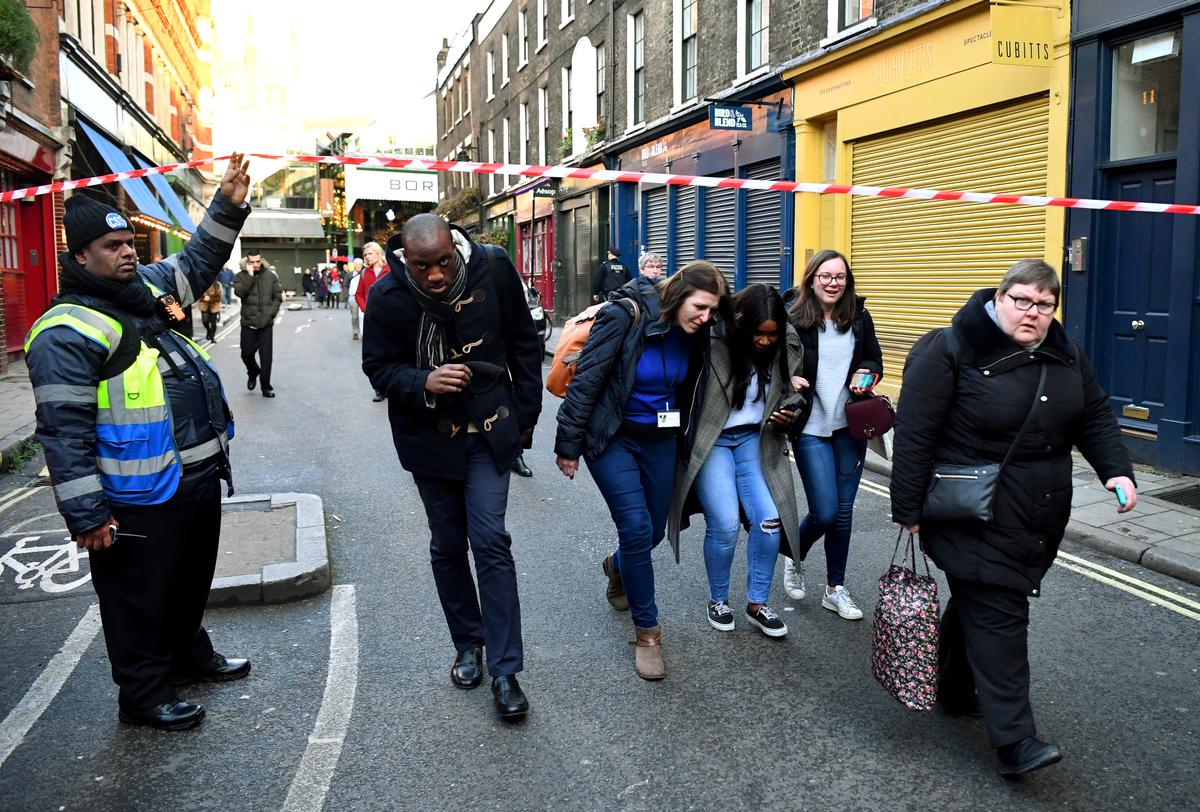 LONDON (Reuters) – British police on Friday shot dead a man wearing a fake suicide vest who stabbed two people to death in London and wounded three more before being wrestled to the ground by bystanders, in what the authorities called a terrorist attack.

The attacker went on the rampage just before 2 p.m. (1400 GMT), targeting people at Fishmongers’ Hall near London Bridge in the heart of the city’s financial district – the scene of a deadly attack by Islamist militants two years ago.

The Times newspaper, citing unnamed government sources, reported that the man had previously been convicted of an Islamist terrorism-related offence and was released from prison about a year ago after agreeing to wear an electronic tag.

“It is a mistake to allow serious and violent criminals to come out of prison early, and it is very important that we get out of that habit and that we enforce the appropriate sentences for dangerous criminals, especially for terrorists,” he said.

Once the attacker was out on the street, a dramatic video posted on Twitter captured the moment when half a dozen bystanders tackled the suspect on London Bridge and grabbed his knife.

The video showed police dragging one man off the suspect before an officer took careful aim. Two shots rang out. The man stopped moving.

Johnson, who has called a snap election for Dec. 12 and is due to host NATO leaders including U.S. President Donald Trump next week, praised those who took on the man for their courage and said Britain would never be cowed.

“I … want to pay tribute to the extraordinary bravery of those members of the public who physically intervened to protect the lives of others,” Johnson told reporters in Downing Street.

“For me they represent the very best of our country and I thank them on behalf of all of our country,” Johnson said. “This country will never be cowed, or divided, or intimidated by this sort of attack.”

He said the incident was now thought to have been contained and vowed that anyone else involved would be hunted down. He later chaired a meeting of the government’s emergency security committee.

Britain’s top counter-terrorism officer, Neil Basu, said specialist armed officers from the City of London police shot the suspect, who died at the scene. He said a hoax explosive device was strapped to his body.

“Our Counter Terrorism detectives will be working round the clock to identify those who have lost their lives, to support all the victims and their families,” London police chief Cressida Dick told reporters.

“We are also working at full tilt to understand exactly what has happened and whether anyone else was involved.”

Labour Party leader Jeremy Corbyn, Johnson’s main opponent in the election, said he was shocked by the incident and that his thoughts were with those caught up in it.

Campaigning has been temporarily suspended.

KICKED IN THE HEAD

Commissioner Dick said the attacker launched his assault at Fishmongers’ Hall, a grand building at the northern end of the bridge.

People leave the area near Borough Market after an incident at London Bridge, in London, Britain, November 29, 2019. REUTERS/Dylan Martinez

One of those who confronted the attacker there told the Daily Telegraph newspaper that he had kicked him in the head to make him drop the knife.

Stevie Hurst, who gives tours of the capital, said he and a colleague took on the suspect with about five others.

“I jumped in and kicked him in the head to make him release his knife. A few others did so,” he told the Telegraph. “He was shouting ‘get off me, get off me’.”

As three armed police officers circled the suspect in the shadow of the Shard skyscraper, western Europe’s tallest building, one bystander in a suit and tie grabbed the knife and swiftly retreated as police engaged.

The city’s mayor Sadiq Khan said ordinary Londoners had demonstrated “breath-taking heroism” in disarming the knife-wielding attacker despite him having a device which they did not know to be a hoax.

“What’s remarkable about the images we’ve seen is the breath-taking heroism of members of the public who literally ran towards danger not knowing what confronted them,” Khan told reporters.

The ambulance service declared a “major incident” in the area and London Bridge station, a busy commuter hub, was closed for a number of hours.

During the 2017 election campaign, London Bridge was the scene of an attack when three militants drove a van into pedestrians and then attacked people in the surrounding area, killing eight and injuring at least 48.

Islamic State said its fighters were responsible, but the British authorities have cast doubt on those claims.

The month before, a suicide bomber killed 22 children and adults and wounded 59 at a packed concert hall in the English city of Manchester, as crowds began leaving a concert by U.S. singer Ariana Grande.

In March the same year, an attacker stabbed a policeman close to London’s parliament buildings after a car plowed into pedestrians on nearby Westminster Bridge.

Six people died, including the assailant and the policeman he stabbed, and at least 20 were injured in what police called a “marauding terrorist attack”.

Earlier this month, Britain had lowered its national terrorism threat level to “substantial” from “severe”, its lowest level since 2014.