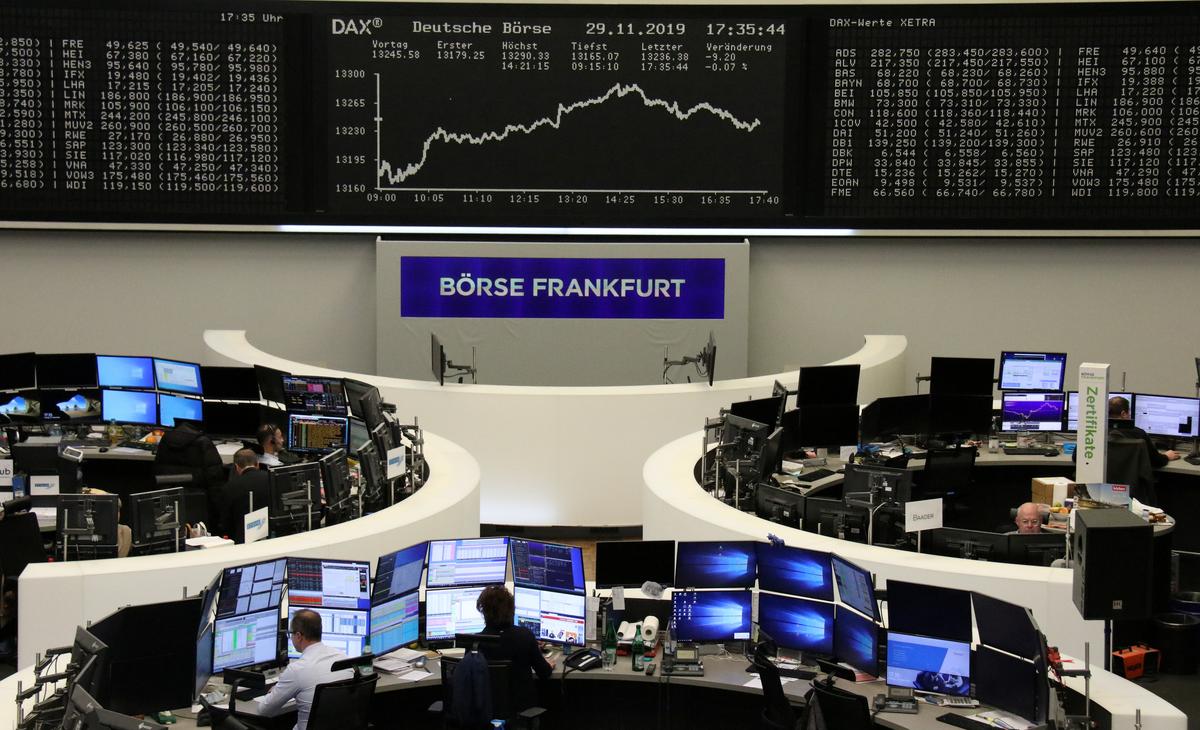 LONDON (Reuters) – European shares opened higher on Tuesday, attempting to claw their way back from three days of falls though the mood remained gloomy after U.S. President Donald Trump showed he was ready to open new trade war fronts despite signs of economic damage.

The United States has threatened duties of up to 100% on French goods while Trump tweeted he would slap tariffs on Brazil and Argentina attacking what he saw as both countries’ “massive devaluation of their currencies.”

France said it would respond strongly to duties on its goods such as champagne, handbags and other products, mooted because of France’s new digital services tax that Washington says harms U.S. tech companies.

A pan-European equity index, which had slumped 1.6% on Monday for its biggest one-day loss in two months, edged up 0.3% though French shares were flat.

Shares in some luxury goods firms extended losses, however, with LVMH shedding almost 2% to one-month lows though others such as L’Oreal managed to rise modestly.

“Today you have a bounce, but it’s fairly mechanical,” said Stéphane Barbier de la Serre, macro strategist at Makor Capital Markets. “The fall was really steep yesterday, and now the biggest risk is that the market wakes up to the reality that macro is really bad.”

But that follows a gloomy session in Asia where an MSCI index of Asia-Pacific shares ex-Japan was down 0.4%, Japan’s Nikkei shed 0.6% and Australian shares posted their worst day in two months with a 2.2% drop.

MSCI’s world stocks index was flat at a one-week low.

China’s blue-chip share index started the recovery, closing in the black, as did the Shanghai benchmark which earlier plumbed a three-month low.

Markets had drawn some cheer from upbeat Chinese factory surveys as well as higher-than-expected manufacturing and inflation readings from the euro zone.

But the U.S. Institute for Supply Management (ISM) cast a pall on hopes for an economic upturn, showing that manufacturing had contracted for a fourth straight month as new orders slid. That pushed U.S. shares off recent record highs, with all three indexes losing 0.6% to 0.9% [.N].

“The market has been listening to the narrative of an impending cyclical upturn, there has been a certain amount of herding, trend following,” he said, referring to the recent bounce in equity markets.

Hopes are pinned on the U.S. consumer to keep the economy afloat. Cyber Monday sales were expected to hit a record following $11.6 billion in online sales during the Thanksgiving and Black Friday shopping bonanza.

The improved mood in Europe did not much affect the German bond market, with yields staying at three-week highs as chances grew of the SPD party leaving the ruling coalition, raising the prospect of early elections or a minority government..

Yields on benchmark German 10-year debt rose 1 basis point to -0.26%, their highest since Nov. 13 and up more than 8 bps from Friday’s close. Yields on southern European bonds also rose, with Italian 10-year debt at 1.45%.

The move higher in German yields over the past two sessions has narrowed the spread between German and U.S. benchmark yields to near its lowest since February 2018.

In currency markets, the dollar traded near a one-week low versus the yen and near the lowest in almost two weeks against the euro, undermined by the weak U.S. manufacturing data.

But the main mover was the Australian dollar, which rose around half a percent after the Reserve Bank of Australia kept its cash rate on hold at 0.75% and stuck with an optimistic outlook for the economy.

Oil prices firmed on expectations that the Organisation of the Petroleum Exporting Countries (OPEC) and its allies may agree to deepen output cuts at a meeting this week. Brent crude futures added 0.5% to $61.19 per barrel.

Additional reporting by Tom Wilson in London and Andrew Galbraith in Shanghai; Editing by Catherine Evans

Animal Joy
The Taliban had promised ‘amnesty for all’ – but they are responsible for most violence against civilians
Westworld Composer on the David Bowie Needle Drop In Season 4, Episode 7: “It Just Played So Perfectly”
Lin-Manuel Miranda Launches Ham4Choice to Fundraise for Abortion Access
“I will do what I can for damage control”: Abortion Information Misinformation within Oklahoma City’s METRO Library