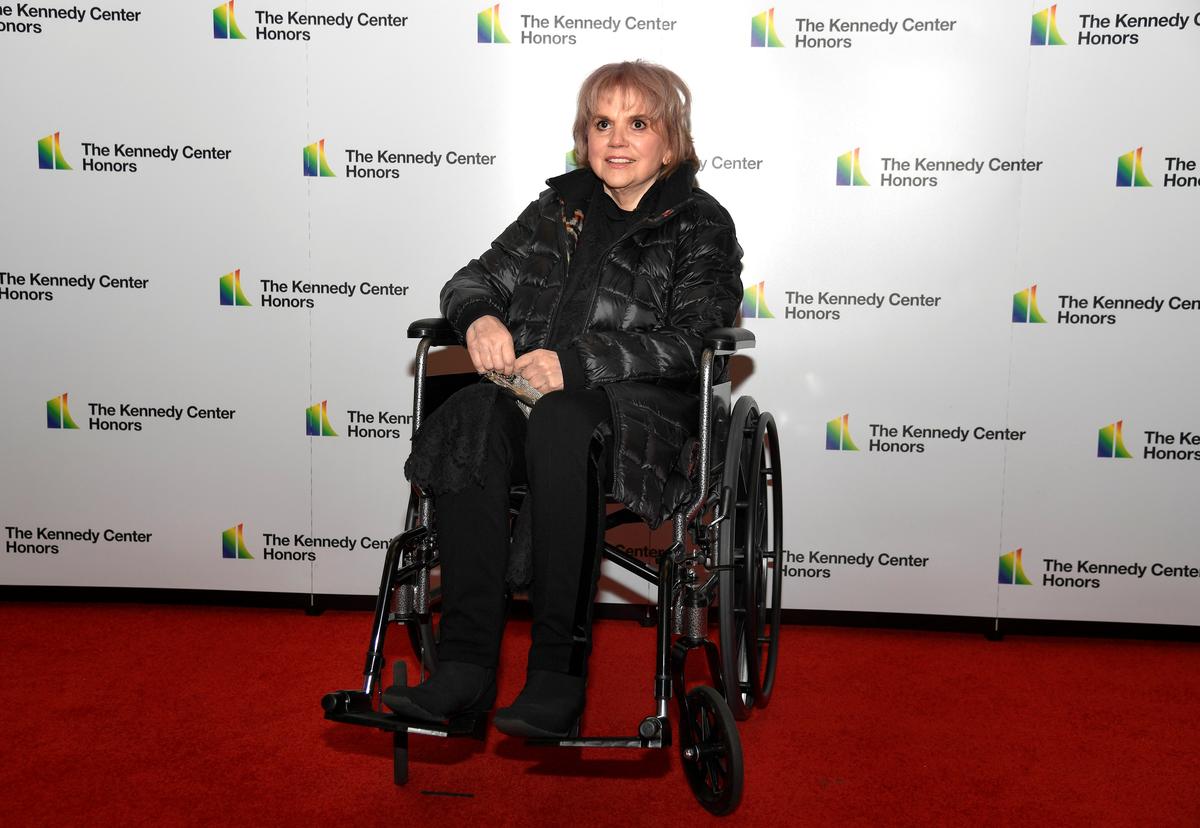 2019 Kennedy Center Honoree singer Linda Ronstadt,73, in a wheelchair and now unable to sing due to an illness, poses for photographers as she arrives for a gala dinner at the U.S. State Department, in Washington, U.S., December 7, 2019. REUTERS/Mike Theiler

Children’s television program “Sesame Street” and conductor Michael Tilson Thomas rounded out the group of five Kennedy Center honorees who were feted for successful, decades-long contributions to the small screen, large screen, and the stage.

With potential impeachment looming, President Donald Trump did not attend the event or hold the customary reception for the honorees at the White House.

The Republican president opted not to come to the annual show during his first year in office because of controversy over his polices and has not come since.

Politics dotted, but did not dominate, the evening.

“The arts is about bringing people together,” said the show’s host, actor LL Cool J. “These are times when that’s needed.”

The crowd at the Kennedy Center gave Nancy Pelosi, the speaker of the House of Representatives, a standing ovation when she was recognized after intermission. Pelosi, a Democrat, has directed the impeachment process against Trump.

The overwhelming focus of the night remained on the artists and their work.

Singer Carrie Underwood wowed the audience with a version of Ronstadt’s song “Blue Bayou” while singers Aaron Neville and Trisha Yearwood performed a moving version of the duet “Don’t Know Much” that Ronstadt recorded with Neville earlier in her career.

Ronstadt is now retired and suffers from Parkinson’s disease.

Field, who has won two Academy Awards and three Emmy Awards, drew tributes from actor Tom Hanks, who greeted her with a “Hi Mama!” in reference to her role as his character’s mother in “Forrest Gump,” and director Steven Spielberg, who discussed his initial skepticism about casting her as Mary Todd Lincoln in his movie “Lincoln.”

She ended up getting the part and an Academy Award nomination. Spielberg said he had never been so proud to be proven wrong.

Also known for roles in “Places in the Heart” and “Mrs. Doubtfire,” Field told reporters ahead of the show that the award recognized a body of work that had resonated with society.

“Sesame Street,” beloved by children around the world, became the first television show to become a Kennedy Center honoree. The show teaches children numbers and letters and celebrates diversity.

A tribute was made to Caroll Spinney, the puppeteer who brought to life popular character Big Bird. Spinney died on Sunday, aged 85.

The night ended with invigorating performances by singers Cynthia Erivo, John Legend, Ne-Yo and the Jonas Brothers in honor of Earth, Wind & Fire, whose members include Philip Bailey, Verdine White and Ralph Johnson. The group has sold more than 100 million albums worldwide.

The Kennedy Center Honors show will be broadcast on CBS on Sunday, December 15.

What’s being done about ‘murder-for-hire’ sites on the dark web, and how dangerous are they?
Teenager denied request to watch execution of father by lethal injection
Jay Leno pictured leaving hospital after being badly burned in car fire
At least one dead, several injured in two explosions at Jerusalem bus stops
The Best Unexpected Board Books To Gift