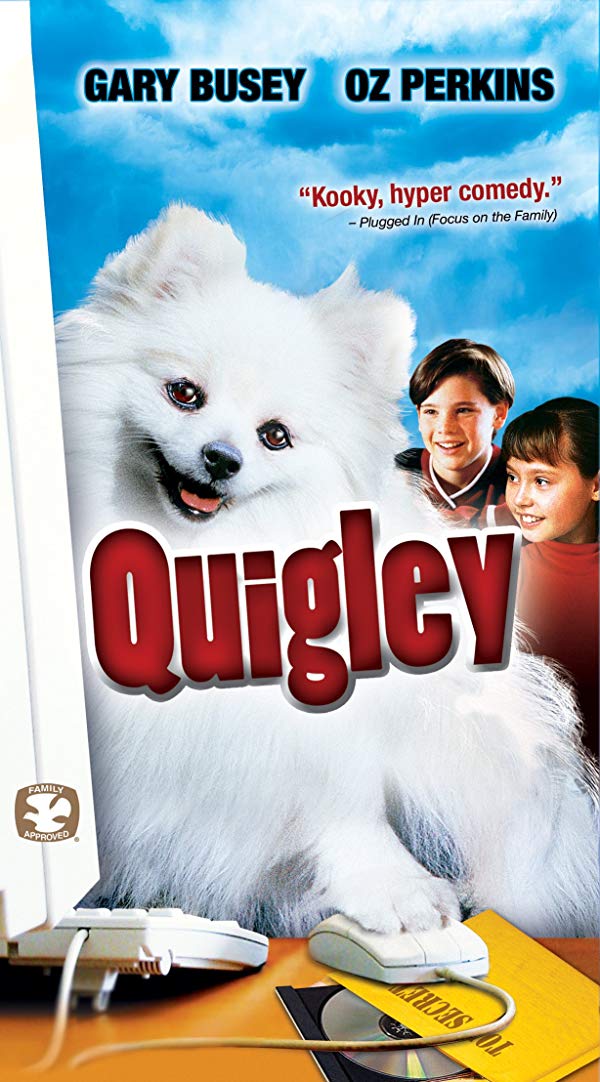 “Quigley,” the mega-hit indie film released in 2003 that was written, produced and directed by William Byron Hillman, is a hysterical adventure of madcap family entertainment that has been named one of the 20 Best Children/Family Movies in film history.

“Quigley’ is a fun-filled family adventure about second chances. Archie (Gary Busey) is a billionaire who has everything one could imagine except for what is most important…a heart and a conscience. On the brink of making an announcement that would forever change the lives of his employees, Archie experiences a tragic accident that takes him to the gates of heaven. It is decided that he should be sent back to earth, in the form of an adorable Pomeranian, a creature he despises even more than people. Along with his guardian angel, Archie is sent on a heavenly mission to help the lives of those around him, while at the same time saving his own. “Quigley” takes you back to a time of wholesome family entertainment that will be enjoyed by all ages.

Writer/Director William Byron Hillman has worked with major stars like Gary Busey, Rock Hudson, Tony Curtis and Shelley Long as well as with most film studios and television networks. His passion is children and animals. While he’s written genres from comedies to thrillers, his passion is hearing kids laugh. Three of his most successful films are: “The Man From Clover Grove”, “The Adventures of Ragtime” and “Quigley”. Bill has befriended many stunt performers and loves working with them to design action stunts that entertain kids of all ages. He believes one of the greatest sounds in the world is laughter and strives to develop scenes that lead to prosperity. While many of his films enjoyed success, when he wrote Quigley it opened a unique definition for amusement and enthusiasm. Bill is an avid Pomeranian lover and has joined Pom Groups in every part of the world. As the writer, producer and director of the motion picture Quigley, the character instantly conceived an international dog hero. The film, translated into many languages, has delighted audiences and Pom owners all over the planet.

Here is the complete list of the 20 Best Children/Family movies in the history of film. All of these films are amazing, classic and timeless:

This whimsical, umbrella carrying, magical nanny is brought by the wind to care for Jane and Michael the children of the wealthy and uptight banks family. They are pleasantly surprised by the arrival of Mary Poppins played by Julie Andrews and embark on a series of fantastical adventures with Mary and her cockney performer friend Bert played by Dick Van Dyke. Often considered the greatest children’s film ever and as a Disney masterpiece, it scored 100% on Rotten Tomatoes.

An overly protective daddy clownfish is forced to find and rescue his son after the young fish swims too close to the surface to prove himself and is caught by a diver. A 99% rating by Rotten Tomatoes, the animation in the movie was coined as “the depth of the ocean itself.”

The Wizard of Oz

The 1939 movie still remains a family favorite to this day. The timeless classic debuting Judy Garland contains one of the most popular songs of our times, “Somewhere Over the Rainbow.” A true, timeless classic with a 98% rating on Rotten Tomatoes, a tornado whisks Dorothy and her dog Toto away to the magical land of Oz, with munchkins and witches, lions, tigers, and bears, Tin men and scarecrows, until she finds her way back to Kansas.

One of the best Disney has to offer some say while others say the plot was a bit confusing. However, the song “Let it Go” was sung by every single child in America. The computer animated musical fantasy was inspired by Hans Christian Andersen’s fairytale, “The Snow Queen.”

Lion cub Simba idolizes his father and takes to heart his own royal destiny. The kings brother former air to the throne kills Mufasa, and the battle for Pride Rock is ravaged with betrayal and the exile of Simba. It is up to Simba to find a way to grow up and take back what was rightfully his. The film introduced CGI animation style.

After learning that a young pig’s life is about to end, a literate spider played by Julia Roberts weaves an elaborate plan to save a friend from the butchers block. Considered charming and enchanting, it focuses on the circle of life. Rated 78% by Rotten Tomatoes, it’s a heart-warming and emotional journey.

Scoring 98% on Rotten Tomatoes, this film remains a classic. Directed by Steven Spielberg the film is about a friendly alien who becomes stranded on Earth and becomes befriended by a young boy named Elliot. Certainly a classic, E.T. has us picturing what aliens look like embedded in our minds forever.

A courageous and adventurous teenager sets sail on a daring mission to save her people.

On her journey she meets the once mighty demigod Maui, and together they sale across the open ocean encountering enormous monsters and more. Scoring 96% on Rotten Tomatoes, the film introduced some good music and is still trending amongst the 5 year-old audience.

A fun-filled family adventure about second chances. Archie (Gary Busey) is a billionaire who has everything one could imagine except for what is most important…a heart and a conscience. On the brink of making an announcement that would forever change the lives of his employees, Archie experiences a tragic accident that takes him to the gates of heaven. It is decided that he should be sent back to earth, in the form of an adorable Pomeranian, a creature he despises even more than people. Along with his guardian angel, Archie is sent on a heavenly mission to help the lives of those around him, while at the same time saving his own. “Quigley” takes you back to a time of wholesome family entertainment that will be enjoyed by all ages.

Shrek featured an all-star cast with classic pop songs and included Mike Myers as a stubborn ogre. The movie has been described as a marvelous quest with a happily ever after ending. Shrek wound up becoming a 5-movie series, the first one coming out in 2001.

Another Christmas classic, this film is a feel, good, happy ending, funny, lesson learning, stroke of brilliance. When 8 year-old Kevin played by Macaulay Culkin, gets accidentally left behind his family trip to Paris, he awakens to an empty house and assumes his wish to be without his family has come true. He soon realizes that two con men plan to rob his house and he alone must protect it. Receiving a four star review the movie prompted the sequel, Home Alone 2.

Charlie and the Chocolate Factory

Every child’s fantasy, the 2005 version starred Johnny Depp and Freddie Highmore and was directed by Tim Burton. The original movie Willy Wonka and the Chocolate Factory starred Gene Wilder, and was released in 1971. Both versions were equally entertaining and based on the premise of a boy from a poor family dreaming of finding one of five golden tickets hidden inside a chocolate bar wrapper which would admit him to the eccentric and reclusive Willy Wonka’s magical factory.

Tom Hanks and Don Rickles started in this 1995 movie about a good-hearted cowboy who belongs to a young boy named Andy. He sees his position as Andy’s favorite toy jeopardized when his parents buy him a Buzz Light Year action figure. Even worse the arrogant Buzz thinks he’s a real spaceman on his mission to return to his home planet. The film scored 100% on Rotten Tomatoes. This film was also considered one of the best movies of the 90’s by certain critics.

Disney’s enchanting animated movie is about a rebellious 16-year-old mermaid Ariel who is fascinated with life on land. During one of her visits to the surface she falls in love with a human prince and makes a dangerous deal with the Seawitch to become human for three days. When plans go awry for the star-crossed lovers, the king must make an ultimate sacrifice for his daughter. The film was considered the modern re-birth of Disney.

The Sound of Music

Another classic musical, the film starred Julie Andrews and Christopher Plummer, and was based on the real-life story of the Von Trapp Family Singers. Andrews plays the part of Maria a nun in training who becomes a governess in the home of a widowed naval captain and his seven children. She brings music and love into their home. The movie is the third highest grossing film of all time in Canada and the US.

Another Adventure Classic, introduced as an animated version in 1953. Originally, The Hollywood Reporter reviewed it as “Captivating.” The ever-child Peter Pan takes Wendy and her brothers to Never-Never Land where they meet Tinker Bell and Captain Hook.

Married superheroes in this Pixar animated film are forced to assume regular lives after the government banned super-power activities. Mr. Incredible although loves his wife and children longs to return to a life of adventure. He gets that chance after being summoned to an Island to battle an out-of-control robot. The film was rated 97% by Rotten Tomatoes.

Tom Hanks stars in this inspiring adventure based on the book by Chris Van Allsburg. When a cynical young boy takes an extraordinary and mysteries train ride to the north pole he embarks on a journey of self-discovery. It’s all about “Believing.” Although mostly directed towards children, adults will be fascinated with this movie as well.

There are always two sides to a story, and one in the middle, such as this film. One of Disney’s most popular villains, Maleficent takes the movie through some dark moments, however kids in our days can take it. It’s beautifully designed and a great family film. Jolie plays an inspiring role as the evil queen created after the fairy tale, “Sleeping Beauty.”

Emmet an ordinary LEGO figurine who always follows the rules is mistakenly identified as the Special, an extraordinary being and the key for saving the world. The film scored 96% on Rotten Tomatoes and is considered one of the best movies based on toys. The movie is smart, humorous and visually fun to watch.

If you have missed any of the films on this list, make sure to buy, rent or stream them for the holidays, they are films you do not want to miss!

8 Of The Best Colognes Under 50 To Keep You Smelling Good Without Breaking The Bank (2022 Edition)
The Best Lip Balm For Men: 10 Of Our Favorite Options To Help Protect Your Lips
Record-Breaking Strongest Steady Magnetic Field Developed by Chinese Researchers: All Details
A$AP Rocky Charged With Assault For Alleged Shooting
Skims Just Dropped a New Swim Collection, and It’s Literally Shapewear for the Water