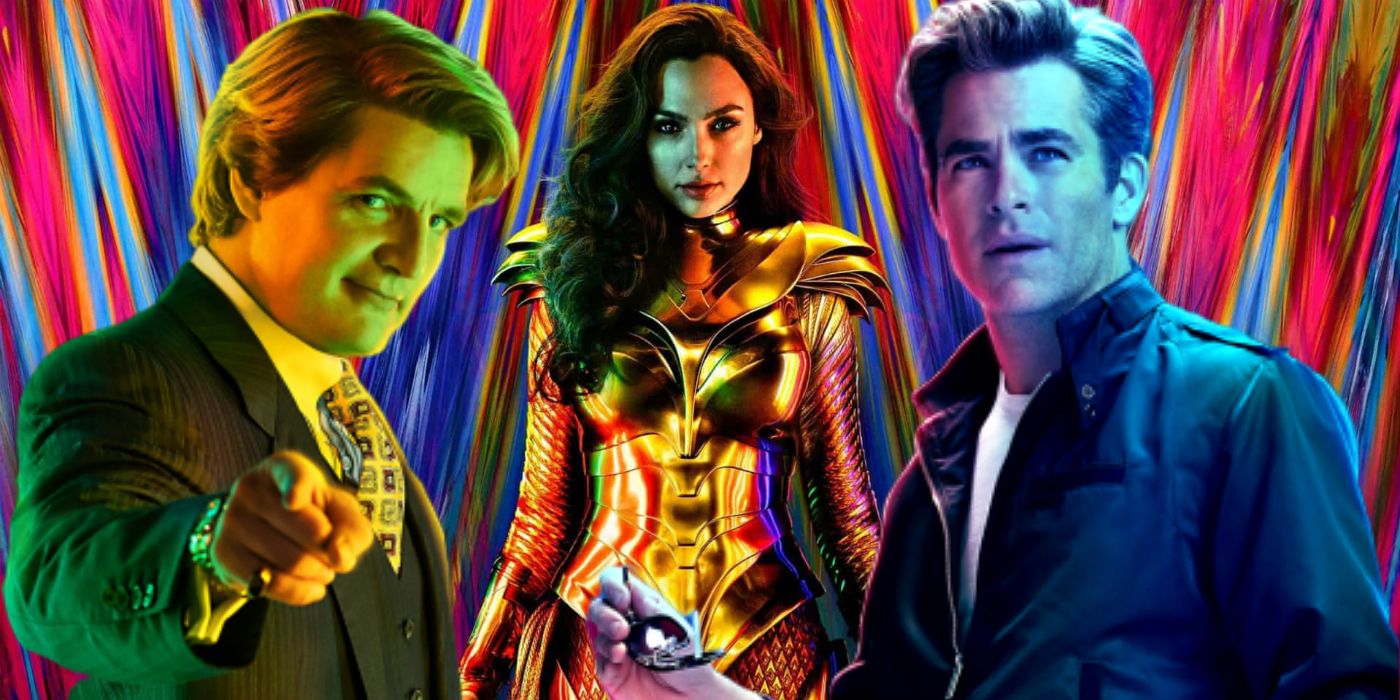 The first trailer for Wonder Woman 1984 brings back Chris Pine’s Steve Trevor, and teases who might be responsible for his return. Diana Prince finds herself in the vibrant, electric world of the 1980s, a far cry from the bleak, war-torn adventures in the 1910’s in her inaugural film. The Wonder Woman 2 trailer offers up a good look at many new characters, as well as some of the movie’s big action set pieces. Viewers were also treated to plenty of shots of Diana in action, including her new Wonder Woman armor.

One of the biggest talking points from the Wonder Woman 1984 trailer is the appearance of Steve Trevor. Trevor was thought to be dead after he sacrificed himself to save the Allies during World War 1. After all he is human, so him surviving the explosion of an airborne plane full of chemical weapons seems a bit far-fetched for obvious reasons. Nevertheless, the character is seen attempting to integrate into the world he apparently has not been in for very long.

Not only taking into account his apparent death as well as the 70 or so year time jump between the settings of these films, there’s a big question mark over how Diana’s love interest is still a factor. Of course, there appear to be some hints at how such a resurrection could occur, but there’s no clear-cut answer as to who exactly is responsible for Steve Trevor’s return to the world that he left many decades ago. However, there is one theory involving a crystal and a business man that appears just a bit more plausible than the rest.

First and foremost, it needs to be addressed that this does in fact appear to be the very same Steve Trevor from the original Wonder Woman. Obviously he appears the same aside from his new outfit, but his personality seems unchanged as well, which is the major point to keep in mind. He knows Diana as if he never left her to begin with, judging on how they interact with one another in the brief clips we see. A clone wouldn’t have this kind of knowledge right off the bat.

Also worth pointing out is that this is clearly not a descendant of Trevor’s who has found himself linked up with Diana. This is especially clear taking into account the fact that he appears absolutely lost in the world of Wonder Woman 1984. He appears confused and even amazed to some extent. A fine example is the art gallery scene toward the end of the trailer, where he mistakes a modern trash can for a work of art. There is a disconnect there culturally that no relative, who would have needed to have grown up in that time period, would have to deal with.

Maxwell Lord May Use A Chaos Shard To Bring Steve Back

One of the new characters introduced in the trailer is the sly businessman Maxwell Lord, played by The Mandalorian star Pedro Pascal. The Lord character has had a few representations in the comics, but most often he is as he appears in the Wonder Woman 2 trailer, a wealthy head of a corporation whose motives are driven by nefarious means. In this case, it could be that Lord has come into the possession of  a powerful relic known as a Chaos Shard. For context, the Chaos Shards are crystals used to intensify vast amounts of energy. In addition, they are also capable of granting wishes. Given a powerful enough source of energy, the crystal can manifest the greatest desire of one’s heart.

“Think about having everything you’ve always wanted” is one of the key lines in the trailer in deducing Lord’s motives and the role he may play in Wonder Woman 1984. We see him offer up a chance at making dreams come true, though in what way and by what method is still relatively unknown. Though it is speculation, could it be that a Chaos Shard has fallen into the possession of Lord? And if so, could he possibly have used it in order to bring back Steve Trevor? After all there is a clear shot of Lord holding a crystal of some sort in the trailer, and it may very well be the key to Steve’s resurrection.

Does Diana Make A Deal With Maxwell Lord?

In the DCEU, Diana Prince’s love for Steve Trevor has been a common thread throughout all of her appearances in the universe. He was her first and only love, and she lost him very quickly. It would not be out of the realm of possibility that Diana makes a deal with Lord in order to get Steve back. After all, Lord’s ad does emphasize that he can grant people what they want most, and it would make most sense for Steve to be just that for Diana. Not to mention, it does appear that Diana first encounters Steve at some type of party, one that could be hosted by Lord himself.

She is confused, a bit frightened even, yet she embraces him all the same. If this was the doing of Lord upon Diana’s request, there is still the question of what exactly he expects to get out of such a deal. He says later in the Wonder Woman 2 trailer that he’ll take what he wants in return, which could mean really anything. If nothing else, this is at least an indication that there is to be some kind of conflict between Diana and Lord because of his new technology, given his sinister delivery and villainous comic roots.

Speculation will run rampant in the months ahead of the release of Wonder Woman 1984, but in time all will be revealed. At the very least, most of the possible pieces to the puzzle appear to be on the table in the Wonder Woman 1984 trailer, and Steve Trevor’s rveturn being linked to Maxwell Lord and the Chaos Shard certainly fits with what’s in the footage.

Shane O’Neill is a writer, moviegoer, gym addict and all around nerd. From Marvel to Star Wars, he’s never too busy to catch a movie on opening night. He is currently attending the University At Buffalo for a Bachelors in Film Studies and has been studying film independently for years. For the past year he has reviewed films as a hobby and has been itching to share his thoughts with the world.

Genetic Evidence of Typhoid and Plague Causing Pathogens Found in DNA of Ancient Civilisations
Slower inflation growth eases pressure on US Fed to hike interest rates
Calls for emergency increase to Universal Credit as report finds some families £1,600 worse off
10 Of The Best Jorts To Beat The Warmer Weather In Style (2022 Edition)
15 Of The Best Silk Ties To Add Some Luxury To Your Office And Formal Wear in 2022