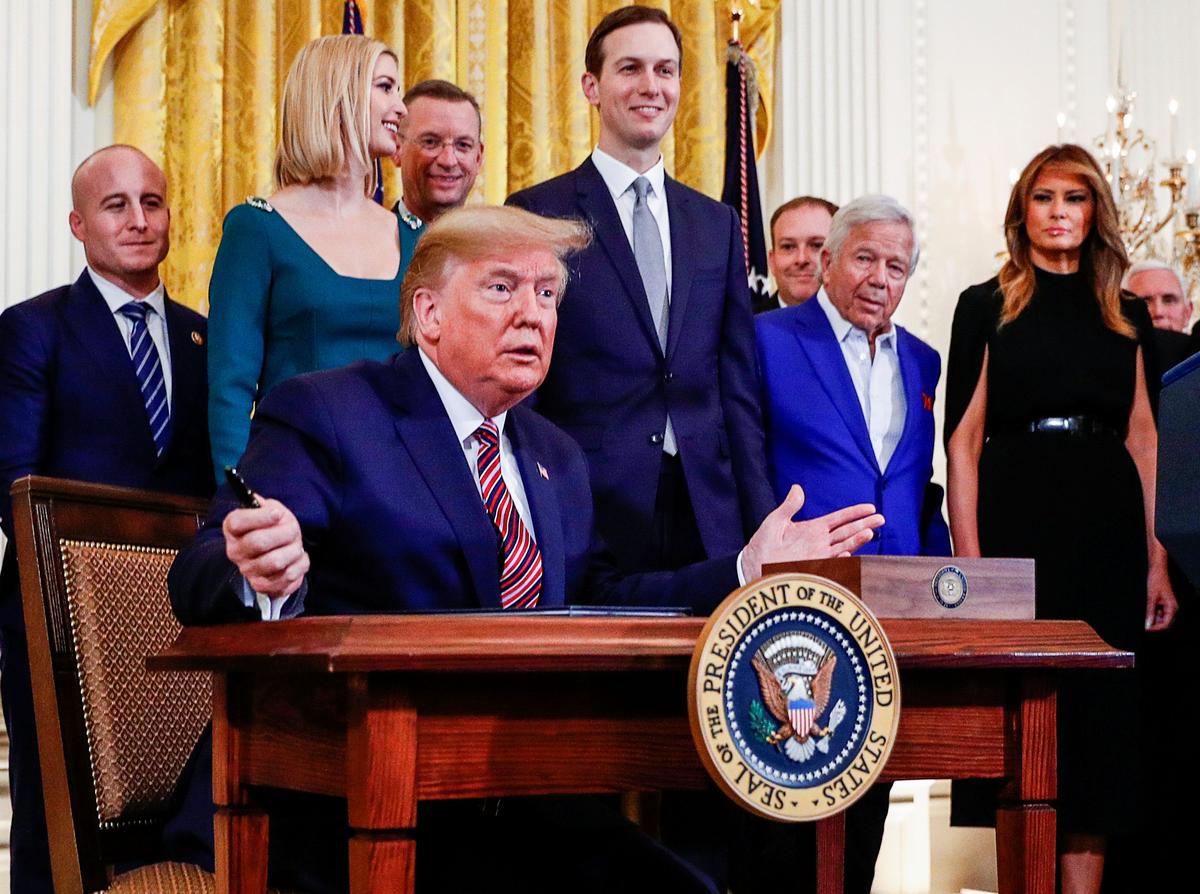 White House senior advisors Ivanka Trump and Jared Kushner, New England Patriots owner Robert Kraft and others stand behind U.S. President Donald Trump after he signed an executive order on anti-semitism during a Hanukkah reception in the East Room of the White House in Washington, U.S., December 11, 2019. REUTERS/Tom Brenne

The order would extend protections against discrimination under the 1964 Civil Rights Act to people subjected to anti-Semitism on college campuses.

“This is our message to universities: If you want to accept the tremendous amount of federal dollars that you get every year, you must reject anti-Semitism. It’s very simple,” Trump said during a Hanukkah reception at the White House.

Title 6 of the Civil Rights Act prohibits discrimination on the basis of race, color, and national origin in programs and activities receiving federal financial assistance.

“This action makes clear that Title 6 of the Civil Rights Act, which prohibits the federal funding of universities and other institutions that engage in discrimination, applies to institutions that traffic in anti-Semitic hate,” Trump said.

“This executive order, like the stalled congressional legislation it is based on, appears designed less to combat anti-Semitism than to have a chilling effect on free speech and to crack down on campus critics of Israel,” it said in a statement.

The Anti-Defamation League, which tracks acts of racism, welcomed the order.

“It also reaffirms protection of Jews under Title VI without infringing on First Amendment rights,” he said in a statement.

The pro-Palestinian Boycott, Divestment, and Sanctions (BDS) movement over Israel’s policies towards Palestinians in the West Bank and Gaza Strip has gained support among some university students in recent years.

The movement, however, has received a bipartisan rebuke in the U.S. Congress and many states have passed anti-BDS measures.

Some critics argue that participating in boycotts is protected by Americans’ constitutional right to free speech and that legitimate criticism of Israeli policies could be stifled under the name of combating anti-Semitism.

How to pick the best MacBook so you’re not overspending for what you don’t need
The Never Have I Ever Cast Tease ‘A Perfect Ending’ For the Fourth and Final Season
Morgan Wallen Brings Out Jeezy, Shot Gunning Beers on Stage
Disney streaming subscriber growth blows past estimates, as company beats on top and bottom line
When Calls the Heart: Hallmark Confirms Season 10 Delay