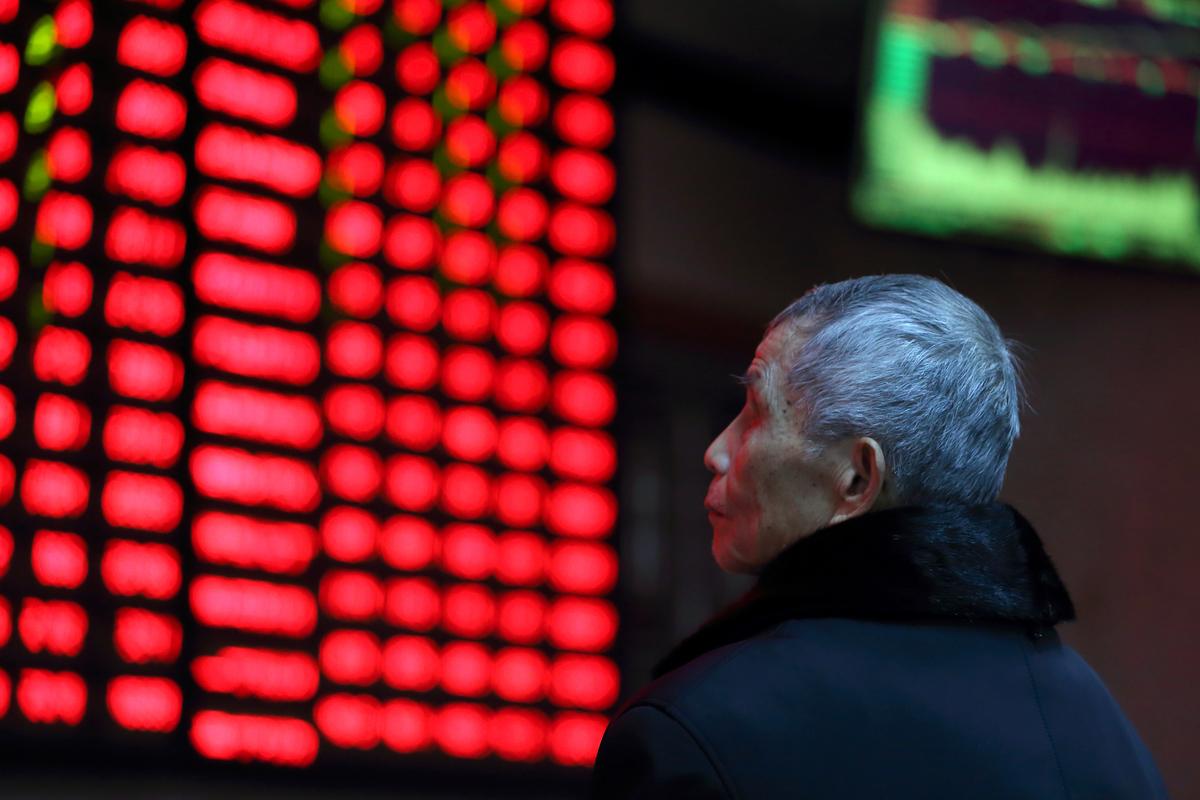 FILE PHOTO: A man looks on in front of an electronic board showing stock information at a brokerage house in Nanjing, Jiangsu province, China February 13, 2019. REUTERS/Stringer/File Photo

Capping broader gains was a fall in oil prices after data showed an unexpected increase in U.S. crude inventories, which hit some energy stocks in the region.

The Fed kept interest rates unchanged, as expected, at its policy meeting on Wednesday but indicated interest rates would remain on hold, which nudged Wall Street stocks higher.

That helped MSCI’s broadest index of Asia-Pacific shares outside Japan .MIAPJ0000PUS to rise 0.2%. Japan’s Nikkei stock index .N225 climbed 0.11% and U.S. stock futures ESc1 rose 0.06%. Australian shares were down 0.29%, however, weighed by the energy sector after the fall in oil prices.

“The Fed’s accommodative stance does support equities, but the chance of a disruptive election outcome in Britain is very real,” said Michael McCarthy, chief market strategist at CMC Markets in Sydney.

“You also have the U.S.-China trade problem. We’re likely to see subdued trading and some investors make lock in profits as the day progresses.”

The S&P 500 .SPX rose 0.29% on Wednesday after the Fed’s rate decision, which included enough dovish tones to cheer markets.

Traders are bracing for a series of make-or-break events over the next few days that have the potential to cause huge swings in financial markets for months to come.

Sterling traded near the highest in more than two years versus the euro and close to a eight-month high versus the dollar before voting begins in an election that will determine whether Britain exits the European Union in an orderly fashion.

Polls show the Conservatives’ lead shrinking ahead of an election starting later Thursday, which could jeopardize chances of a smooth Brexit.

Exit polls for Britain’s election will begin around 2200 GMT Thursday after voting closes, then official results will begin to trickle in.

UK Prime Minister Boris Johnson’s ruling Conservative Party is running on a pledge to enact a swift split from the EU, ending more than three years of uncertainty.

Traders say a hung parliament or a victory for the main opposition Labour Party could cause huge disruptions because Labour is promising another referendum on membership of the bloc.

Trump is expected to go ahead with the tariffs, a separate source told Reuters, which could scuttle efforts to end a 17-month long trade war between the world’s two-largest economies.

The dollar index .DXY against a basket of six major currencies traded at 97.413. On Wednesday it fell to a four-month low after Powell it would take a significant pick-up in inflation to cause the Fed to raise rates.

Treasury yields initially fell in reaction to Powell’s comments, but they rebounded slightly in Asia. The yield on benchmark 10-year Treasury notes US10YT=RR rose to 1.7965%.

U.S. crude futures CLc1 rose 0.26% to $58.91 a barrel in Asia. A report by OPEC released on Wednesday suggested that oil markets are tighter than previously thought.

Traders are also focused on state oil company Saudi Aramco (2222.SE), whose shares surged the maximum permitted 10% above their IPO price on their Riyadh stock market debut on Wednesday, making it the world’s most valuable listed company.

ISRO’s RH200 Sounding Rocket Registers 200th Consecutive Successful Launch
What’s being done about ‘murder-for-hire’ sites on the dark web, and how dangerous are they?
Trump loses bid to avoid handing over tax returns
Kylie Jenner Uses Hulu Show to Tease Her Youngest Child’s New Name
It’s about to be way easier to make a smart home. Here’s what you need to know