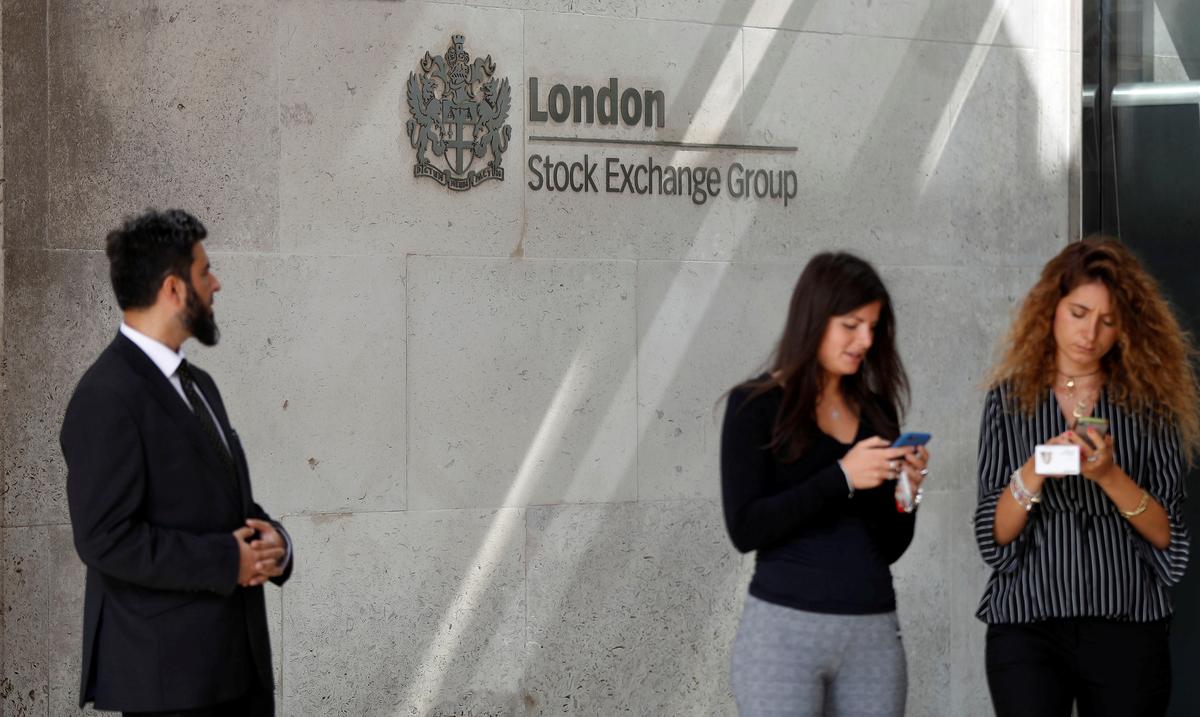 LONDON (Reuters) – World shares took another run at record highs on Thursday, as the right messages from the U.S. Federal Reserve set traders up for a packed day of central bank meetings and a Brexit-defining election in Britain.

FILE PHOTO: People check their mobile phones as they stand outside the entrance of the London Stock Exchange in London, Britain. Aug 23, 2018. REUTERS/Peter Nicholls/File Photo

The Fed kept U.S. interest rates unchanged, as expected, but it was a message that it would take an unexpected and “persistent” rise in inflation to lift them again that cheered the bulls and pushed the dollar to its lowest since August. [FRX/]

“This is quite a strong signal that current interest rates will remain at these low levels for the time being,” Mirabaud’s chief economist, Gero Jung, said of the Fed, the European Central Bank and Switzerland’s SNB which had also kept rates steady.

“And we have a modest cyclical improvement in the economy, so that is good for risk assets.”

It was the start of a series of events over the next few days likely to set the course of financial markets for months to come.

Sterling weakened from its highest in more than two years versus the euro and an eight-month high versus the dollar with voting underway in an election that will determine whether Britain exits the European Union next month.

Expectations are that the ruling Conservatives, led by Boris Johnson, will gain a majority that allows his stalled Brexit deal to be passed by a new parliament, but the latest polls have shown the lead shrinking.

Exit polls for Britain’s election will begin around 2200 GMT, after voting closes. Whether there will be a clear winner or another hung parliament is likely to emerge between 0400 GMT and 0600 GMT.

Following a 10% surge by the pound in the last few months, traders are now hedging their bets. Peter Kinsella, Union Bancaire Privée’s global head of forex strategy, said a Conservative majority remained his expectation, however.

The euro EUR=EBS held at $1.1135 as Christine Lagarde kept the ECB’s sub-zero interest rates steady at her first meeting as president of the European Central Bank.

Her first post-meeting press conference was being closely watched, especially with the bank also updating its economic forecasts and due to make changes to its policy framework next year.

“The scope of the strategy review may not be finalised before early 2020, but it should be centered on four main issues: the definition of price stability and the inflation measures; the side effects of unconventional policy measures; the internal and external communication strategy; climate risks,” said Frederik Ducrozet at Pictet Wealth Management.

Switzerland’s central bank also kept its policy ultra-loose and reaffirmed that negative interest rates would remain central to its plans. The Swiss franc was little changed.

Trump is expected to go ahead with the tariffs, a separate source told Reuters, which could scuttle efforts to end a 17-month trade war between the world’s two largest economies.

The dollar index .DXY against a basket of six major currencies fell to a four-month low of 97.057, but spent most of the European session regaining ground.

FILE PHOTO: A man looks on in front of an electronic board showing stock information at a brokerage house in Nanjing, Jiangsu province, China February 13, 2019. REUTERS/Stringer/File Photo

Treasury yields had also fallen in reaction to the Fed’s comments, but they recovered, too. Yields on the benchmark 10-year Treasury US10YT=RR reached 1.7966 before what was expected to be subdued Wall Street opening. [.N]

In commodities, U.S. crude CLc1 edged up 0.4% to $59 a barrel and global benchmark Brent LCOc1 rose 0.5% to $64 per barrel. A report by OPEC released on Wednesday suggested that oil markets are tighter than previously thought.

Truss: ‘I’ll be your minister for the Union’. Sunak: ‘I’ll make Britain energy secure’
Cineworld preparing to file for bankruptcy – report
Starmer insists his ‘radical’ energy plan is ‘real answer’ to crisis
New Phase of Matter Created in Quantum Computer, Could Act as Long-Term Quantum Information Storage
Top Gun: Maverick’s Miles Teller Admits He’s In The Kenny Loggins ‘Fan Club’ After Appearing In Not One, But Two Iconic Movies With His Music