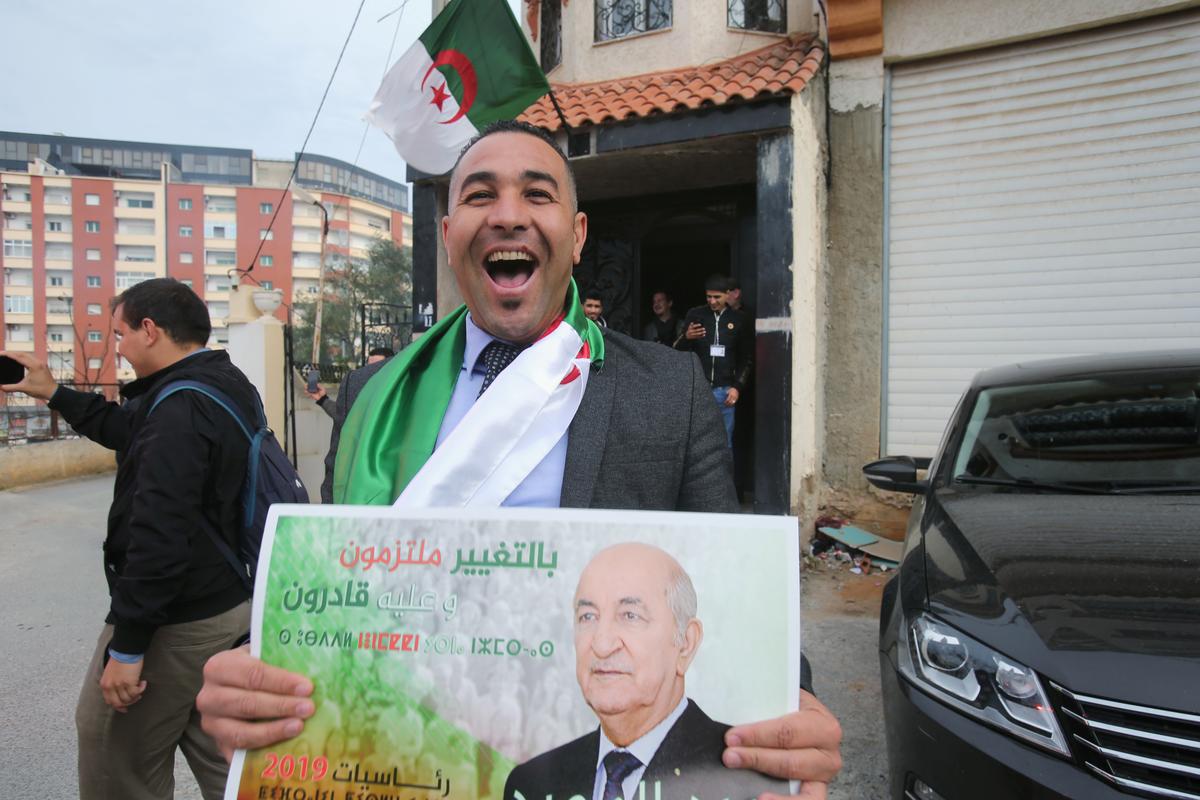 ALGIERS (Reuters) – A former prime minister was elected Algeria’s new president in a vote the authorities hope will end months of turmoil, but protesters who toppled his predecessor marched again, vowing their movement would not stop.

Supporter reacts at the campaign headquarters of Abdelmadjid Tebboune after he was announced as the new president, in Algiers, Algeria December 13, 2019. REUTERS/Ramzi Boudina

Abdelmadjid Tebboune, 74, campaigned as a technocrat who had proven his integrity by being sacked for falling out with powerful business tycoons after just three months serving as prime minister in 2017 under veteran ruler Abdelaziz Bouteflika.

But protesters marching in Algiers see him as beholden to the same shadowy, military-backed elite that has ruled Algeria for decades, and quickly rejected his victory.

Thousands crowded central Algiers despite a heavy police presence, suggesting the new leader may struggle to quell the uprising that ended Bouteflika’s two-decade rule in April.

“The country is ours and we do what we want”, they chanted, while holding up a banner that read: “We will not stop!”

According to official results, Tebboune, who served in a number of cabinet posts under Bouteflika including two stints as housing minister, won the election with more than 50% of the vote, avoiding the need for a run-off against any of four other senior former officials sanctioned to stand.

Authorities said turnout was 40%, a figure they said vindicated the decision to hold the election in the face of a boycott by the protesters.

The army argues that the only way to move the country forward after demonstrators brought down Bouteflika is to elect a successor. But protesters saw the contest as an illegitimate sham intended to keep the old ruling elite in place.

“We have toppled Bouteflika, and we will topple all the system’s men. We won’t give up,” said Riad Mekersi, 24, who has participated in weekly protests for 10 months.

“I cannot accept this vote because I do not recognize the corrupt system,” said Salim Rahmoun, 27. He was holding an Algerian flag and a plaque reading “No vote with the gang.”

Tebboune supporters gathered outside the conference center where his victory was announced, chanting “congratulation to Algeria”.

“All Algerians should be optimistic,” said a young man who gave only his first name, Abdelaziz, because his neighbors rejected the election. “The protesters should stay at home.”

Protesters marched in cities and towns across Algeria throughout Thursday’s election, in some places clashing with police, who tried to disperse them with baton charges.

The election body said some 9 million Algerians took part, though some protesters said they believed the figure was false, and there were no foreign observers to monitor the vote.

“The turnout is satisfying and it will give the new president enough backing to implement his reforms,” said Ahmed Mizab, a commentator on state television, saying it showed the decision to hold the elections was “propitious and right”.

The electoral body head, Mohamed Charfi, said the vote had “opened a new page”, achieving the democracy people had demanded in their uprising.

Whatever happens to the protests, Tebboune will face trying times. Nearly all Algerian state revenues come from oil and gas exports, which have declined in price and volume. The government has already approved a 2020 budget with a 9% cut in spending.

Tebboune has tried to harness the protest movement as a source of support for reform while rejecting its message that the entire ruling elite should go. He vowed during the campaign to “separate money from politics”.

He has used the circumstances of his brief premiership to polish his credentials as a man of integrity who stood up to members of Bouteflika’s coterie, many of whom are now jailed facing corruption charges.

However, his own son was also arrested in the post-Bouteflika purge and is awaiting trial for graft. Tebboune supporters said his son’s plight proved his independence.