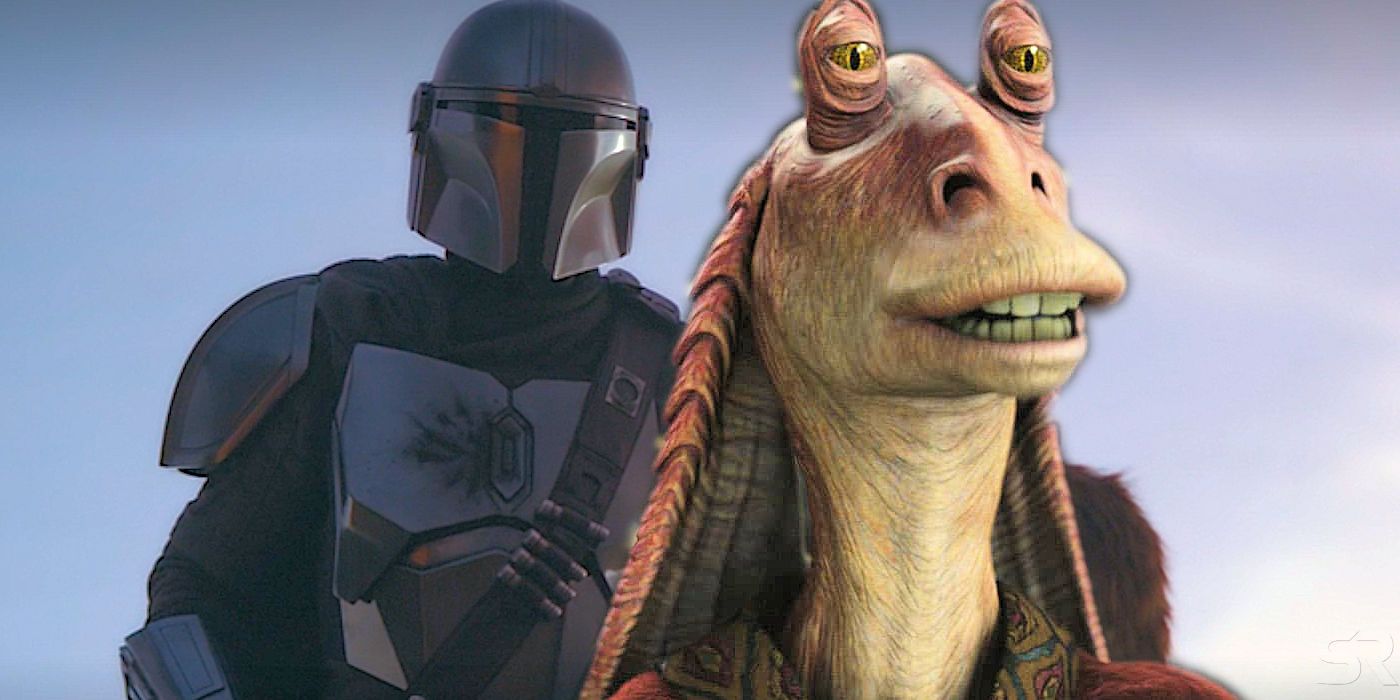 The Mandalorian episode 6, “The Prisoner”, made multiple references to aliens and planets from various Star Wars movies, but perhaps the most interesting one was to Jar Jar Binks’ species, Gungans, from Star Wars: Episode I – The Phantom Menace. This isn’t the first time The Mandalorian has referenced the Star Wars prequels; in the previous episode, “The Gunslinger”, Mando lands on Tatooine and is immediately greeted by a trio of DUM-series pit droids. But referencing Gungans is easily one of the series’ most overt callouts.

Jar Jar Binks was one of the main characters in George Lucas’ Star Wars prequel trilogy, first meeting and befriending Qui-Gon Jinn and Obi-Wan Kenobi on Naboo before becoming one of Padme Amidala’s closest advisors. But despite Lucas’ best intentions, Jar Jar Binks essentially became a joke amongst Star Wars fans. This was reflected in the animosity Jar Jar Binks actor Ahmed Best received while the prequels were still in theaters and in the years since. And now, with The Mandalorian, it seems that the joke about Gungans being ridiculed in the galaxy is still alive.

Related: The Mandalorian Shows What Star Wars Spinoffs Should Have Been

On the way to the prison transport in The Mandalorian episode 6, “The Prisoner”, Bill Burr’s Mayfield makes fun of Mando’s refusal to remove his helmet. He wonders if Mando is a Gungan underneath the armor and subsequently asks, “Is that why youssa don’t want to show your face?” It’s played off as a joke, but beyond that, it’s one of the biggest references yet to the prequel trilogy – and the first reference to Jar Jar Binks and the Gungans in the series.

What’s more interesting is that Mayfield knows what Gungans are. They aren’t typically well-known outside of Naboo. Even Qui-Gon and Obi-Wan weren’t sure what Jar Jar Binks was when they first met him. But considering that Jar Jar Binks played an integral role in bestowing emergency powers to Supreme Chancellor Palpatine when the Galactic Republic was still around – and then later paid the price for his mistake by ultimately becoming a street performer on the planet Theed and being ridiculed by those old enough to know what he did – it’s possible that Mayfield knows of Gungans because of Jar Jar Binks. As mentioned earlier in the episode, Mayfield was an Imperial sharpshooter.

Regardless of how well-known Gungans are and how Mayfield knows about them, the moment is arguably one of the best references The Mandalorian has had yet. It’s become a show that’s quite self-aware of the Star Wars galaxy, making more and more meta references with each passing week. Last episode saw a major reference to Han Solo and now there’s been one for Jar Jar Binks, delivered by Burr, who is a comedian nevertheless. We’ll just have to wait and see if there are any more big references as The Mandalorian heads into its season finale.

Next: Star Wars Reveals What Happened On Tatooine After Luke (& The Empire) Left

Mansoor is an editor at Screen Rant. He joined the team way back in 2016 as a lists writer and has been working his way up ever since, writing a variety of articles almost daily. He covers all the main beats but never passes up the opportunity to discuss anything related to Star Wars and DC Comics.

Mansoor spends way too much time reading comics, watching movies, and playing games, and he’s still wondering just what exactly is on page 47. But hey, at least all that knowledge enables him to make obscure pop culture references in conversations (though that probably isn’t a good thing). And his tea addiction comes does in handy whenever it comes down to writing up breaking news and hot takes.