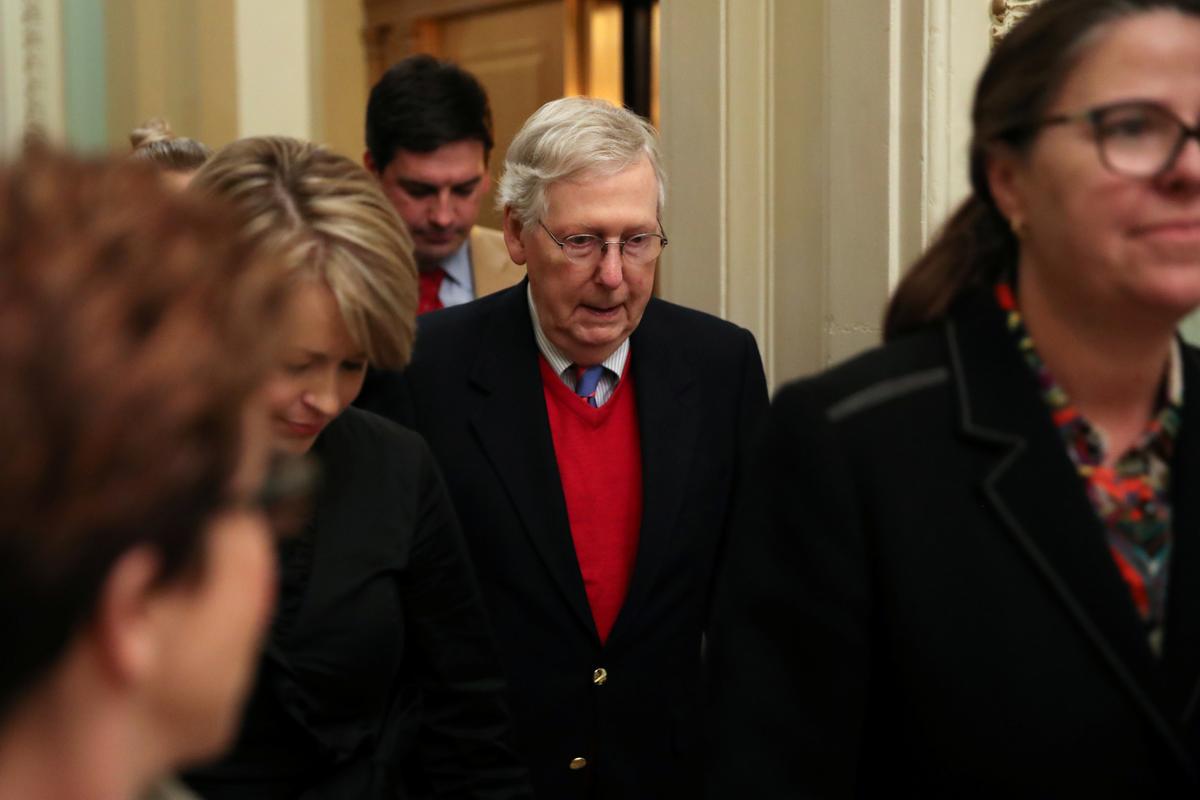 WASHINGTON (Reuters) – Senate Majority Leader Mitch McConnell on Tuesday brushed aside a Democratic request to call four current and former White House officials as witnesses in a Senate impeachment trial expected next month, sending another clear signal that he expects senators not to remove U.S. President Donald Trump from office.

On the day before the Democratic-led House is expected to pass two articles of impeachment charging the Republican president with abuse of power and obstruction of Congress for his dealings with Ukraine, two senior senators clashed over how to conduct the subsequent Senate trial that decides whether Trump remains in power.

In dueling speeches on the Senate floor, McConnell said he would not allow a “fishing expedition” after a “slapdash” House impeachment process, while Senate Democratic leader Chuck Schumer said a trial without witnesses would be a “sham” and suggested Trump’s fellow Republicans favored a cover-up.

Members of the House Rules Committee met on Tuesday over the rules for the debate before a historic vote set for Wednesday in the chamber in which Trump is likely to become the third U.S. president to be impeached.

If the House approves articles of impeachment – formal charges – as expected, it would set the stage for a trial in the Senate, controlled by Trump’s fellow Republicans – on whether to convict him and remove him from office. No president has ever been removed from office via the impeachment process set out in the U.S. Constitution, and Republican senators have given little indication of changing that.

Trump has refused to cooperate with the House impeachment process and ordered current and former officials like those mentioned by Schumer not to testify or provide documents.

McConnell took aim at Schumer and Representative Adam Schiff, the chairman of the House Intelligence Committee that spearheaded the impeachment inquiry launched in September.

“So now, the Senate Democratic leader would apparently like our chamber to do House Democrats’ homework for them. And he wants to volunteer the Senate’s time and energy on a fishing expedition to see whether his own ideas could make Chairman Schiff’s sloppy work more persuasive than Chairman Schiff himself bothered to make it,” McConnell said.

“So … this concept is dead wrong. The Senate is meant to act as judge and jury, to hear a trial, not to rerun the entire fact-finding investigation because angry partisans rush sloppily through it,” McConnell added.

McConnell and Schumer both said they expected to meet very soon to discuss how to proceed.

“From everything we can tell, House Democrats’ slapdash impeachment inquiry has failed to come anywhere near – anywhere near – the bar for impeaching a duly elected president, let alone removing him for the first time in American history,” McConnell added.

The White House also indicated opposition to Schumer’s requests for the Senate trial. McConnell has previously said there is “no chance” the Senate will convict and remove Trump and that he would work in “total coordination” with the White House and Trump’s defense team.

“What is Leader McConnell afraid of? What is President Trump afraid of? The truth?” Schumer asked on the Senate floor.

House Democrats accuse Trump of abusing his power by asking Ukraine to investigate former Vice President Joe Biden, a leading Democratic contender to oppose him in the 2020 U.S. presidential election. Trump is also accused of obstructing the congressional investigation into the matter.

Trump remained in attack mode, referring to the process in a Twitter post as “this whole Democrat Scam” and calling himself “your all time favorite President.”

“Don’t worry, I have done nothing wrong. Actually, they have!” Trump wrote.

In what is expected to be a marathon meeting, the Rules Committee will decide how much time to set aside for debate on Wednesday before lawmakers vote on the articles of impeachment.

Representative Jerry Nadler – the Democratic chairman of the House Judiciary Committee, which approved the articles of impeachment last week – missed the Rules Committee meeting because of a family emergency, and Representative Jamie Raskin represented the Democrats in his place. Nadler is expected to be back at the Capitol on Wednesday.

Raskin said the Judiciary Committee amassed overwhelming evidence that Trump committed the “high crimes and misdemeanors” set as the standard for impeachment in the Constitution.

“All of this is backwards, what’s up is down and down is up. We’re more Alice in Wonderland than we are the House of Representatives,” Collins added.

The looming vote promises to bring a raucous, partisan conclusion to a months-long impeachment inquiry against Trump that has bitterly divided the American public as voters prepare for next year’s presidential and congressional elections.

The final House vote is expected to fall largely along party lines.

Trump will be on friendlier terrain in the Senate, which is expected to consider the charges in January. Republicans hold 53 of the Senate’s 100 seats, and at least 20 of them would have to vote to convict Trump in order to clear the two-thirds majority required to remove Trump from office. None have indicated they may do so.

WWE discovered Vince McMahon paid $5 million to Donald Trump’s foundation, report says
A$AP Rocky Charged With Assault For Alleged Shooting
Father John Misty Stuns with Performance of “Buddy’s Rendezvous” on Kimmel: Watch
Top Gun: Maverick’s Miles Teller Admits He’s In The Kenny Loggins ‘Fan Club’ After Appearing In Not One, But Two Iconic Movies With His Music
Days of Our Lives Round Table Week of 8-08-22: Are You Team JEric or Team Ericole?