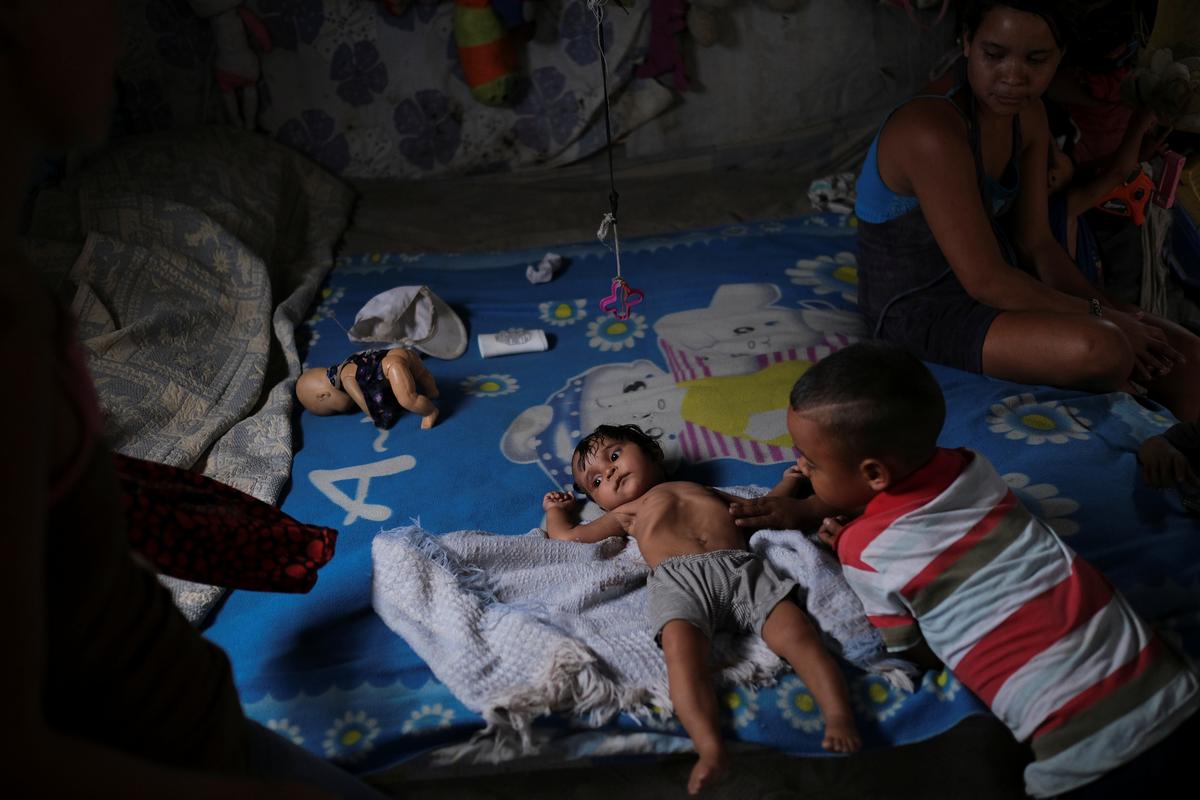 BARQUISIMETO, Venezuela (Reuters) – Last August, Francys Rivero, an unemployed single mother of four, feared for her baby’s life. Two months after his birth, even though she was breastfeeding him regularly, Kenai de Jesus wasn’t gaining weight.

Gregoria Hernandez, 23, sits next to her seven-moth-old daughter Sonia, who according to her has diarrhoea and is underweight, while resting on a bed in Barquisimeto, Venezuela, August 16, 2019. “I feel like the worst of mothers, because I don’t have a way to help them, to give them what they need, the food they need,” said Hernandez. REUTERS/Carlos Garcia Rawlins SEARCH “VENEZUELA MALNUTRITION” FOR THIS STORY. SEARCH “WIDER IMAGE” FOR ALL STORIES.

“I feel like my heart is breaking,” Rivero, 32, told Reuters in an interview here in the capital of the western Venezuelan state of Lara. “I don’t know what’s wrong with my son.”

She tried repeatedly to see nutritionists, but failed. One didn’t show up, another required a month-long wait. Desperate, Rivero attended a charity event offering checkups and information for families of children with nutritional problems.

At the event, organized by Caritas, the Catholic aid organization, doctors performed a check-up. With donations from the charity, and financial assistance from siblings now living abroad, Rivero began supplementing her breast milk with baby formula.

Within weeks, Kenai rebounded. By December, he reached an acceptable weight for his age. But Rivero, like many enduring a recession now in its sixth year, fears she could once again find herself short of the money needed to keep him healthy.

“How am I going to afford such expensive food?” she asks.

Venezuela’s economic crisis is taking a crippling toll on the country’s children, who face a growing risk of malnutrition as basic food is increasingly out of reach for many families. The public health system, notoriously short of medicine and other standard supplies, is unable to provide much succor, and aid groups struggle to bridge the gap.

President Nicolas Maduro, increasingly a global pariah for undermining democracy and overseeing the country’s economic collapse, blames the crisis and food shortages on U.S. sanctions meant to force him from power.

A lack of proper nutrition is stunting growth, diminishing cognitive development and causing physical and emotional trauma among hundreds of thousands of young Venezuelans. As a result, doctors and other health experts argue, Venezuela faces a generation of young people who will never meet their full physical or mental potential.

Between 2013 and 2018, according to the United Nations Children’s Fund, or UNICEF, 13% of the country’s children suffered from malnutrition. Caritas, in a recent study conducted in five Venezuelan states and the capital, Caracas, found that 16% of children under the age of five suffer from acute malnutrition and that nearly twice as many suffer from low growth rates for their age.

Although the United Nations and other agencies import some food and nutritional aid, it isn’t enough for Venezuela’s needs and the assistance doesn’t always get where it is most required. The U.N. Office for the Coordination of Humanitarian Affairs has raised just a third of the $222.7 million it sought for Venezuela for the second half of 2019, according to official U.N. data.

“A population suffering from malnutrition implies we are going to have adults with less physical and intellectual potential,” said Raquel Mendoza, a nutritionist at Mapani, an aid group in Barquisimeto that helps poor families diagnose and treat malnourished children. “We’re going to see a regression in the development of the country because human resources are diminished.”

Venezuela’s Information Ministry, responsible for government communications including those of the Health Ministry, didn’t respond to requests for comment.

The ministry’s 2016 annual report, the last one it published, celebrated advances in nutrition since the 1980s and said child malnutrition “has stopped being a public health problem.”

For those without enough to eat, the problem is very real.

Rosa Rojas, a 32-year-old widow and mother of six, relies on rice and other carbohydrates to keep her kids fed. Rare is the day they get three full meals. “We just eat twice,” she said.

“I feel like the worst of mothers,” Hernandez told Reuters. “I don’t have a way to help them, to give them what they need.”

Deina Alvarez, a 6-year-old student and aspiring gymnast, is underweight and receiving nutritional supplements from a local charity. Although her parents both work, they don’t earn enough to fill a grocery cart and buy the medicines they both need as epileptics.