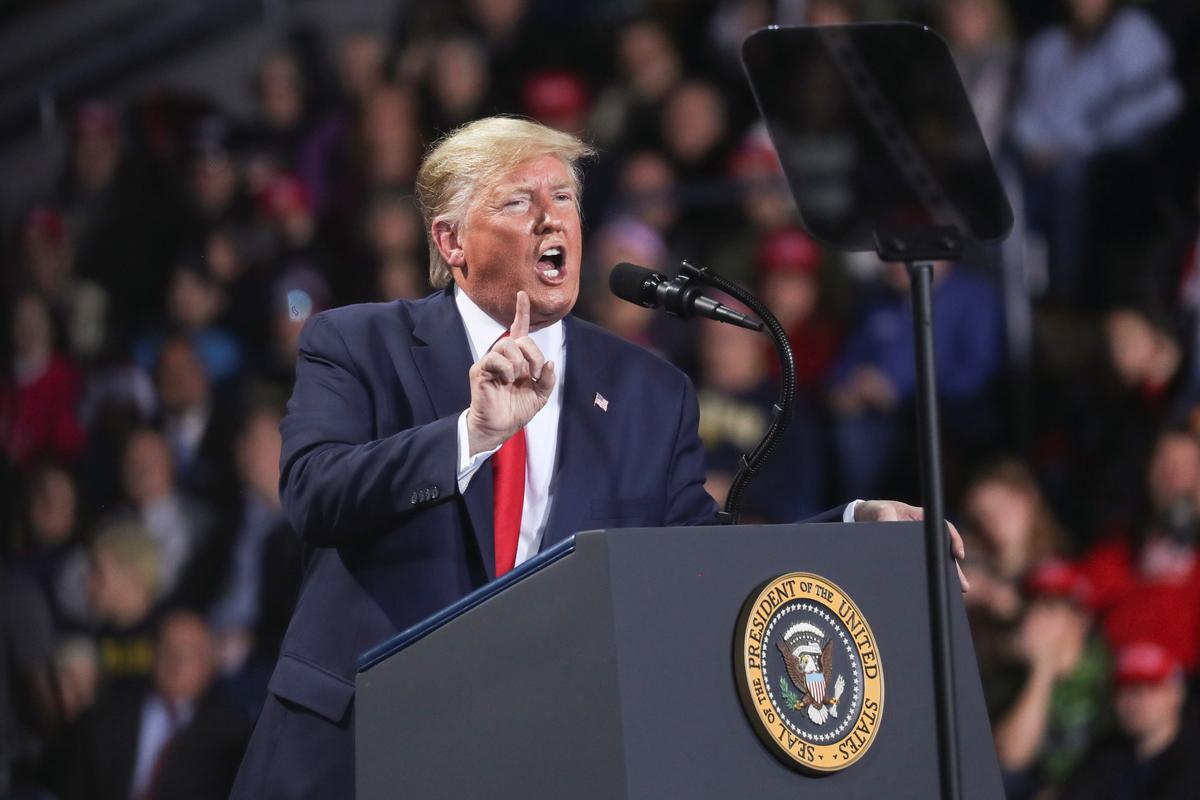 BATTLE CREEK, Mich.,/WASHINGTON (Reuters) – An embattled President Donald Trump condemned the Democratic-led impeachment vote against him on Wednesday, irked that he made U.S. history in a bad way but assured that Republicans in the Senate will save him from being ousted.

“This lawless, partisan impeachment is a political suicide march for the Democrat Party,” Trump told a rollicking rally for his re-election campaign in Michigan just as the Democratic-controlled House of Representatives voted to impeach him.

The vote, while along party lines, cast a cloud over the image-conscious Trump, putting him in a category as one of only four presidents out of 45 who have faced possible ouster through impeachment. Only one, Richard Nixon, actually left office and did so before a House impeachment vote occurred.

Assurances from Senate Majority Leader Mitch McConnell that the Republican-controlled Senate will not convict him in a trial early next year were something of a cold comfort for Trump, who has frequently complained that the “nasty” word of impeachment was being associated with him.

In Michigan, a state that helped carry him to victory in 2016 and will be critical next November, Trump expressed pride that Republicans in the House were united in opposition to impeachment and that three Democrats had also voted against it.

He said House Speaker Nancy Pelosi and Democrats had given themselves an “eternal mark of shame” and that tens of millions of people will show up next year to overturn Democratic control of the House and “vote Pelosi the hell out of office.”

“They’re the ones who should be impeached, every one of them,” he said of Democrats.

The rally was a convenient venue for Trump to address the matter at hand and let the rhetoric fly. Scheduled weeks ago, it just happened to take place on the day of the House vote.

There was no sign from supporters in the crowd that their enthusiasm for him had waned. “Four more years!” they chanted.

Trump waited for the House to begin voting before coming on stage to address thousands of cheering supporters, setting up a dramatic split-screen image for television viewers.

His case now goes to the Senate, where McConnell has vowed impeachment will die. McConnell, a close Trump ally, plans a trial in early January and has assured the White House that the necessary 67 votes from the 100-senator chamber will not be there to convict him and remove him from office.

Trump has been described by aides and advisers as unhappy about the impeachment imbroglio but feeling it will provide some political dividends as he celebrates trade deals with China and Mexico and Canada that stand to boost the U.S. economy.

“He was not happy about being impeached, but he wasn’t down about it – not even close,” said a close confidant who recently spoke to Trump.

A balm for Trump have been opinion polls showing his job approval rating on the rise and the popularity of impeachment on the wane. So was a surge in donations to his re-election campaign, the confidant said. More than 600,000 first-time donors have contributed to Republican National Committee and Trump campaign coffers in the last six weeks, according to the RNC.

Reporting by Steve Holland in Battle Creek and Jeff Mason in Washington; editing by Grant McCool