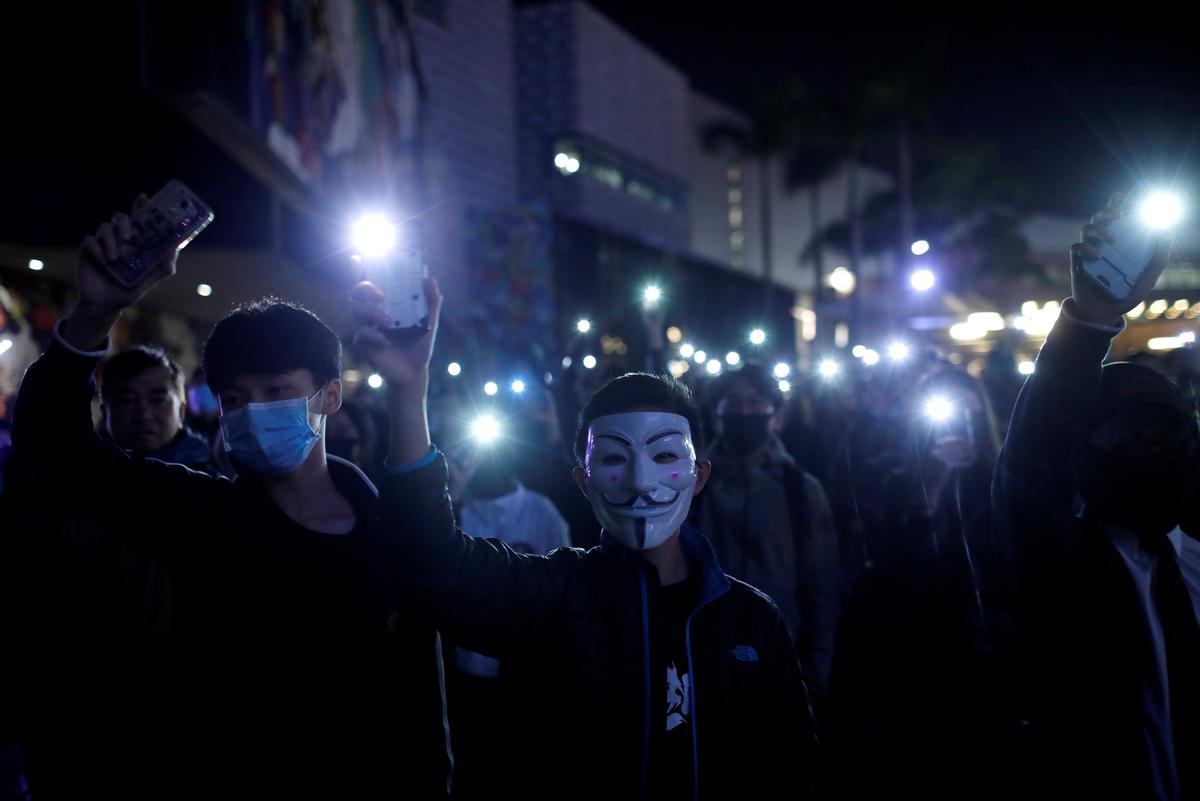 About 1,000 people, most of them dressed in black and wearing face masks, marched on a route that took them by the consulates of Australia, Britain, the European Union, the United States, Japan and Canada, to drop off a petition.

“What happens in Hong Kong is not just a local issue, it is about human rights and democracy. Foreign governments should understand how this city is being suppressed,” said Suki Chan, who participated in the protest.

“We need to continue to seek international attention and let them know this movement is not losing momentum.”

The marchers’ petition called on governments to “stand with Hong Kong” by passing legislation to introduce visa sanctions and freeze assets of Chinese and Hong Kong government officials.

Anti-government protests have roiled the financial hub for more than six months, with protesters angry over what they see as Chinese meddling in the freedoms promised to the former British colony when it returned to Chinese rule in 1997.

Beijing has blamed the unrest on “foreign forces” and said attempts to interfere in the Chinese-ruled city were doomed to fail.

The U.S. legislation, which also threatens sanctions for human rights violations, came after similar “citizen diplomacy” petitions in Hong Kong this year to the U.S. consulate and has been cheered by protesters waving the stars and stripes flag.

Beijing denounced the U.S. legislation and Hong Kong’s government said it sent the wrong signal to the demonstrators and increased economic uncertainty.

At the U.S. consulate, protesters are calling for the passage of the “Be Water Act”, championed by Missouri Senator Josh Hawley and named after a protest slogan borrowed from martial arts legend Bruce Lee.

The bill would freeze assets of Chinese nationals and state-owned enterprises believed to have contributed to suppressing freedom of speech in Hong Kong.

Thursday marks the 35th anniversary of a treaty between China and Britain on Hong Kong’s future, that set the stage for its 1997 handover.

British Foreign secretary Dominic Raab urged China in a statement to open dialogue with the protesters and respect the commitments in the treaty.

In 2017, China’s foreign ministry said the 1984 joint declaration, signed by then British Prime Minister Margaret Thatcher and Chinese Premier Zhao Ziyang, was a historical document that no longer had any practical significance.

Beijing denies interfering in Hong Kong and says it is committed to the “one country, two systems” formula put in place as a result of the 1984 treaty that guarantees a high degree of autonomy.

Hong Kong’s special status, which helped it grow into a global financial center and avoid U.S. tariffs on Chinese imports, is also important to Beijing, which uses the city as its main gateway to global capital.

But worries in Hong Kong about what many residents see as the erosion by Beijing of freedoms, and the months of protests partly fueled by such worries, have raised questions about how the city should be run.

“We have to let the international community know so that they can also help us.”

Your iPhone can identify any song with just a tap. Here’s how to set it up
The Length of Earth’s Days Has Been Mysteriously Increasing, and Scientists Don’t Know Why
China extends military drills around Taiwan as fears grow of conflict
Pegasus V, Dwarf Galaxy Near Andromeda, Believed to Be One of the First Galaxies
Kevin Costner’s Massive Western Has Cast A Stranger Things Star And More