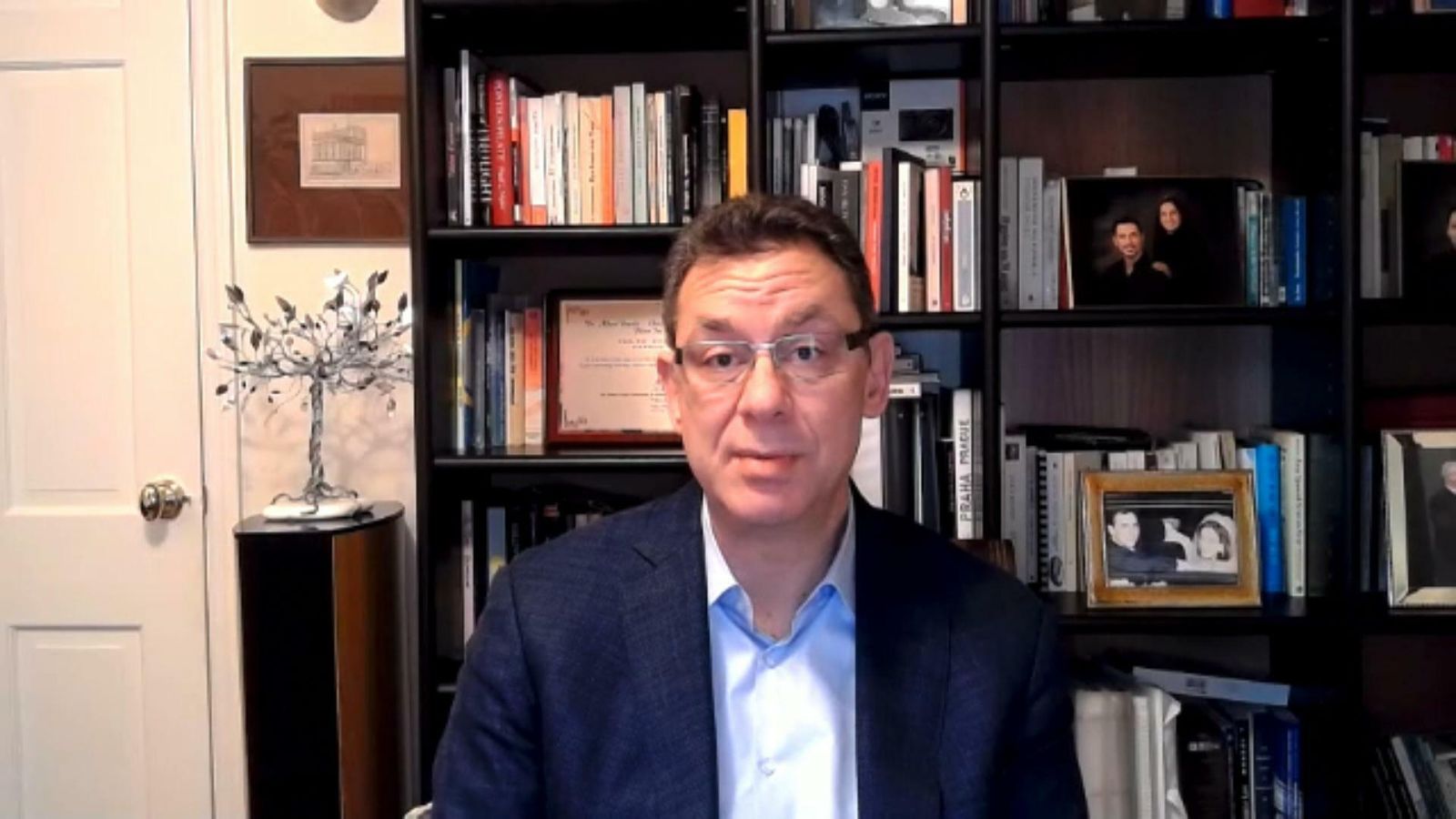 The head of Pfizer has told Sky News his company is poised to send out doses of its COVID-19 vaccine “within hours” of it receiving official approval.

Chief Executive Albert Bourla said his company would be applying for permission from regulatory authorities across the world “very, very soon – within a couple of days” and was then ready to start shipping the first of 20 million vaccine doses that have already been made.

He told Sky News doses would be sent out to countries as soon as their health authorities gave permission, raising the possibility of a “race to regulate”, but said the world would have to be “patient” because demand would outstrip supply. 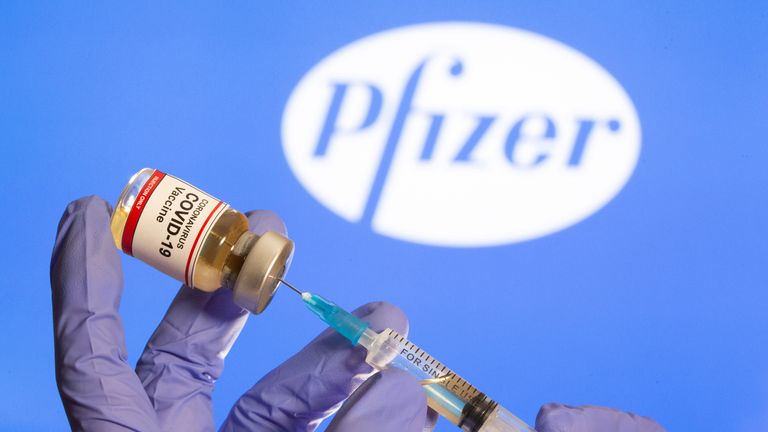 “The light is real – there is light at the end of the tunnel,” he said.

“I believe that the second half of 2021 will be a very different experience for many of us.”

Mr Bourla spoke to Sky News exclusively, shortly after his company had concluded its Phase 3 study into its COVID-19 vaccine, created in partnership with the German firm BioNTech.

The study showed it to be 95% effective, a figure he described as “spectacular” and “a great moment for science but, more importantly, for humankind”. He said the day when he was told about the vaccine’s success was “the most brilliant day of my life”.

His company has already produced more than 20 million doses of the vaccine and expects that figure to have reached 50 million by the end of the year. Another 1.3 billion doses are planned to be manufactured in 2021.

Before it can be used, the vaccine needs regulatory approval from health authorities.

Mr Bourla said: “It is a question of days before we apply to send the requested information to regulatory bodies around the world. Then it is their call. They need to take their time and follow their processes.

“Once they give us the green light, our goal is to start shipping in a couple of hours.

“The major regulatory authorities of the world listen to each other, but they are powered scientifically.

“They are independent. It’s not likely that one agency takes time and another comes to a conclusion much faster.”

However, Mr Bourla confirmed his company would react to each decision in turn – meaning that the faster a country grants regulatory approval, the faster it would receive the vaccine.

“If someone approves faster than the other, then I believe the ethical thing to do is to start sending vaccines to the citizens of this jurisdiction because every day means lives,” he added.

The Pfizer boss’s prediction is that “if we would be able to vaccinate the populations, I think we will be able to go back” to a normal life, but he urged patience and caution.

“Until the time when we reach herd immunity, people need to be very careful. They need to follow the instructions of the health authorities – to wear masks and respect social distancing,” he said.

With each person requiring two doses of the vaccine for it to be effective, the company’s estimate of 1.3bn doses by the end of 2021 would only cover around 9% of the world’s population. So, would he consider sharing production with rival companies?

“Oh yes, we are not bound by our own infrastructure,” Mr Bourla said.

“It is very challenging to transfer manufacturing to GSK or Sanofi. It’s not that easy. But we will explore any possible avenue. That will need to involve other manufacturing networks of other corporations.”

He said he would also offer support to other companies, working on separate vaccine projects, and said that the level of collaboration across the industry “is something that will redefine the industry right now, for the world and for all of us, there’s only one competitor – the virus”.

Mr Bourla said poorer countries would receive the vaccine on a “not-for-profit” basis, which means “the lowest possible price so we can make it accessible for them”.

He said Pfizer had already worked on contingency plans in the event of customs disruption caused by Brexit.

“I don’t think it’s a secret that our company, together with all the corporate world, was not fascinated with the idea that the UK will separate from Europe, but it is the will of the United Kingdom’s people and we have been working for years now to come to a solution when this transition happens,” he said.

During our conversation, Mr Bourla, who is Greek and has worked for Pfizer for 27 years, was awash with optimism and happiness. There was only one moment when his mood darkened, and that was when he reflected on the experience of one country – the United States.

“Something went wrong and that something was in the US – and that was the politicisation of this process,” he said.

“It became a political statement – if you wore a mask; if the vaccine will come quickly or not. That didn’t help at all.

“Everybody started discussing scientific topics with political instead of scientific terms, and people got confused. They didn’t know who to believe, or what to believe, and that is the situation we face right now.

“I hope all the things that we did were a demonstration of the ultimate transparency we placed, all together as an industry. We follow the strictest guidelines. We publish the protocols, we started publishing the data.”

He also issued a message to those who were dubious about the value of vaccines, saying that anyone who refused a vaccine risks “becoming the weak link that allows this virus to replicate. I hope that a lot of the people who were sceptical before will reconsider”.

My last question to him was about his own reflections, about the process of leading Pfizer, a company valued at more than $200bn, over this tumultuous year.

It was only his second year as the company’s chief executive, but he told me that pressure was “not at all the political pressure that some people were speculating but the pressure of billions of people, millions of businesses and hundreds of governments – they are investing in our industry, in Pfizer, to find a solution – so you feel that on the shoulders”.

“The moment when I received the call to say we had an effective vaccine…and ten minutes later I was informed that the level of efficacy was 95,96%, it was the most brilliant day of my life,” he said.

“I couldn’t describe with words the relief and the feeling of purpose, but I felt at this moment that this is a decision that determines the future of the world – not of my company or my family. And I was very lucky to be in this position, and to be able to do what I did.”

Soccer player makes history as first woman to play in Power 5 college football game
Inside Taylor Swift and Joe Alwyn’s Relationship of 4 Years: ‘They Have Spoken About Their Future Together’
Steve Hamm: An Actor’s Actor
Book Riot’s Deals of the Day for December 4, 2020
Airbnb seeks valuation of up to $35 billion in its IPO