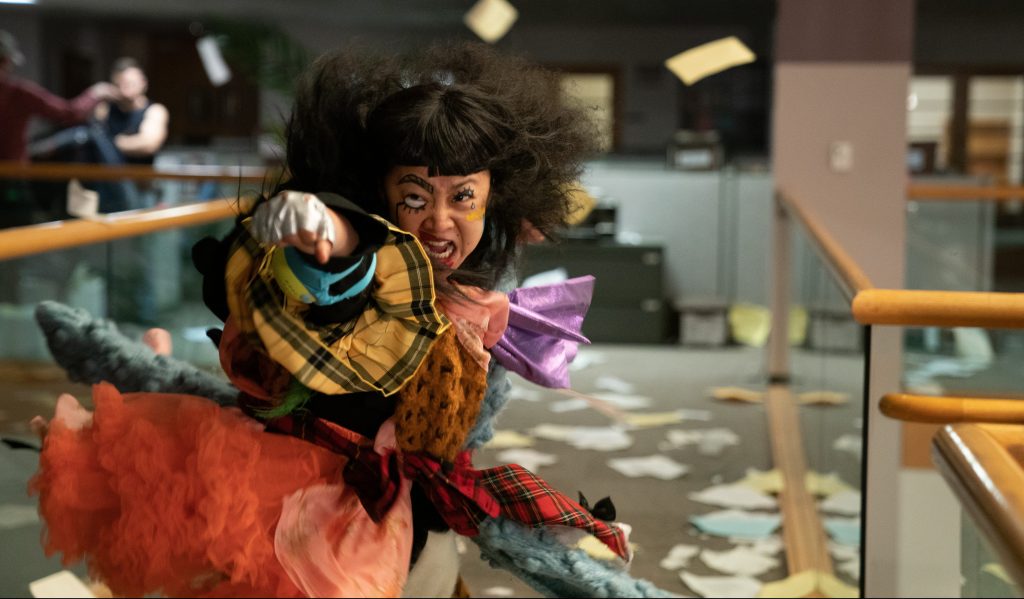 If you want to keep it alive, just make more jaw-dropping, outrageous fare which can excite the 18-34 crowd.

That’s the trick, and that’s what A24 did with the Dan Kwan and Daniel Scheinert directed martial arts family fantasy feature, Everything Everywhere All at Once, which by Sunday will become A24’s highest grossing movie ever at the domestic box office with a take between $50M-$52M. Yesterday, the movie with a running total of $49.1M became A24’s second-highest grossing movie ever stateside, taking over the Oscar-nominated Lady Bird which ended its U.S./Canada run at $48.95M.

Everything Everywhere All at Once‘s domestic B.O. by Sunday will easily unseat A24’s previous highest grossing movie stateside, the 2019 Safdie Brothers directed Adam Sandler caper, Uncut Gems which finaled at $50M after 13 weekends. Everything Everywhere All at Once crosses the studio’s milestone in its ninth weekend. Booked in 1,576 theaters, the expectation is that the Michelle Yeoh, Jamie Lee Curtis, Stephanie Hsu, Ke Huy Quan film grosses more or less $3M over the next three days.

Everything Everywhere All at Once hits an A24 record at a great time when the studio has an embarrassment of riches a the Cannes Film Festival including the HBO Max series Irma Vep, the Directors Fortnight title Men from Alex Garland (also opening in the U.S. this weekend to $3.5M), Jesse Eisenberg’s When You Finish Saving the World in Critics’ Week, Claire Denis’ Stars at Noon in competition, and God’s Creatures in Directors Fortnight.

Everything Everywhere All at Once launched like a sonic boom as SXSW’s opening night film back in March, ringing back the cinephile festival after a three year absence due to Covid. A24 opened the film to the highest theater average year to date with $50K or $501K at ten locations over the weekend of March 25-27. Not only has the movie rained cash down on specialty cinemas, fueled by a social media and digital driven ad campaign, but it’s crossed over into mainstream metro multiplexes like AMC Burbank and NYC Lincoln Square. The AGBO production has further seen its ticket sales boosted by several Imax screenings. The near 70% 18-34 charged movie notched five stars in Comscore/Screen Engine PostTrak exits, with an overall 88% positive score, and men under 25 (who’ve turned out at 22%) giving the Daniels movie its best grade at 90%.  Other big demos for the movie included men over 25 (40% turnout, 88% positive), women over 25 (26% turnout, 88% positive), and women under 25 (13%, 85% grade).

Jupiter Might Have Eaten Baby Planets To Amass Metals: Scientists
Zelenskyy to urge G7 to do more to help war effort as Johnson to demand action on Ukrainian grain
NATO set to agree biggest defences overhaul since the Cold War – including expansion of 40,000 strong response force
French Montana Gets NYC Mayor Endorsement for New Album
This Viral Glass Bag Is Waiting for You on Amazon