The launch of the world’s most powerful rocket on its test flight to the moon’s orbit has been postponed, after scientists discovered a hydrogen leak on board.

The Artemis 1 could now lift off from Cape Canaveral on Friday, after missing its launch window today.

The launch had been delayed during the fuelling process, just 40 minutes before the scheduled take-off, after a liquid hydrogen leak was discovered.

Read more: What you need to know about NASA’s mission to put humans back on the moon 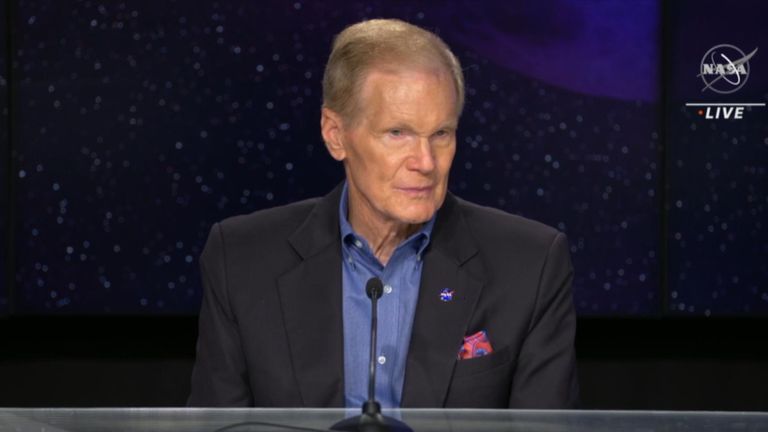 NASA boss: ‘Scrubs are just a part of programme’

NASA said: “Launch director Charlie Blackwell-Thompson has called a scrub of the attempt of the launch of Artemis 1.

“The issue that came up was an engine bleed which couldn’t be remedied, but the rocket is currently in a stable configuration.

“It was mostly tanked, but not completely tanked.

“Engineers are now working on a plan to continue gathering data about this particular engine and the bleed that didn’t work out.”

The Artemis project is aiming to put people on the moon once more, as a stepping stone to missions to Mars.

Its first mission, a 42-day uncrewed flight around the moon, will test the huge rocket and the Orion spacecraft that astronauts will eventually travel in.

While in space it will deploy 10 CubeSats – a type of miniaturised satellite – which will perform a variety of work in deep space, from studying how radiation affects yeast DNA to hunting for water ice on the moon.

The 98-metre Space Launch System (SLS) is the most powerful rocket NASA has ever built and in this crucial testing phase it will fly further than any spacecraft built for humans: 40,000 miles past the far side of the moon and 280,000 miles from Earth.

The megarocket’s 8.8 million pounds of thrust at launch is 13% more than the Space Shuttle, and 15% greater than the Saturn V rocket used on the Apollo missions.

Each of the two boosters generates more thrust than 14 four-engine commercial airliners, according to NASA, and will fire for 126 seconds, providing more than 75% of the vehicle’s thrust before they break off.

Disappointment from onlookers as launch scrubbed

By David Blevins, news correspondent, at Cape Canaveral in Florida

“It’s my birthday, so it sucks!” one teenage girl told me.

She and her parents were among the hundreds poised on Cocoa Beach to watch Artemis 1 launch on the other side of Canaveral Bite.

An African American couple seated nearby said they’d brought their toddler to witness the first step towards putting a person of colour on the moon.

Vice President Kamala Harris had already arrived at the Kennedy Space Centre to witness history, but history will have to wait.

Early morning talk of troubleshooting a fuel leak and conditioning problems with an engine on the Space Launch System hadn’t deterred the sightseers.

“I’m bummed because I drove her all the way from Minnesota,” a middle-aged man said.

They can only hope it’s just one small postponement, and not one giant delay to this landmark launch.