Ukrainian President Volodymyr Zelenskyy has called on the global nuclear watchdog to force Russia into demilitarising the Zaporizhzhya nuclear power plant – and return its control to Ukraine.

Officials from the International Atomic Energy Agency (IAEA) travelled to the facility last week and warned there was an “urgent need” for interim measures to prevent a nuclear accident at the plant.

It called for a nuclear safety and security protection zone to be created around the facility, after expressing fears about physical damage to the plant caused by shelling.

And in his nightly address to his nation on Tuesday, president Zelenskyy said that since Russia had “put the world on the radiation disaster edge” it was “up to the world” to put in place “appropriate measures” to ensure Russia “will be forced to stop terror”.

He went on: “I believe that the world not only deserves but needs the representatives of the IAEA to force Russia to demilitarize the territory of the ZNPP (Zaporizhzhya nuclear power plant) and return complete control to Ukraine.”

The IAEA team said it had seen first-hand damage to the road surface, walls and windows of various buildings of the plant, as well as the overpass connecting the reactor units.

The shelling could have caused “safety significant impacts, loss of lives and personnel injuries”, its report into their findings said.

It warned the situation presented a “constant threat to nuclear safety and security” because critical safety functions could be impacted. 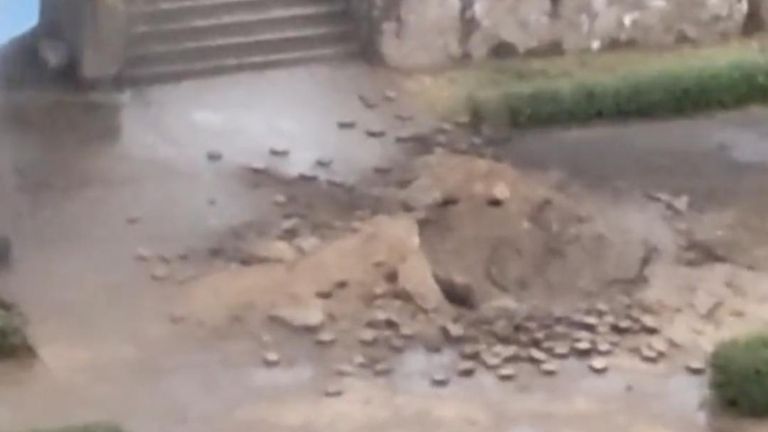 António Guterres, UN Secretary-General, said bluntly, he was “gravely concerned” about the situation, saying it could spell a “catastrophe”.

“Let’s tell it like it is: Any damage, whether intentional or not, to Europe’s largest nuclear power plant in Zaporizhzhia or to any other nuclear facility in Ukraine could spell catastrophe, not only for the immediate vicinity, but for the region and beyond.

“All steps must be taken to avoid such a scenario.”

Russia has occupied the plant for months and has been accused of storing military equipment inside the facility.

Both Russia and Ukraine have also traded blame for the shelling which has damaged the plant in recent weeks.

In her first call with a foreign leader, she accepted an invitation for her to visit Ukraine and reiterated her support for the country in its war with Russia.

The UK has been one of Ukraine’s most vocal international backers, sending almost 7,000 anti-tank weapons, hundreds of missiles and armoured fighting vehicles. It is also training Ukrainian soldiers.

According to an official readout of the call, Ms Truss had said she “looked forward to working with the President in the coming weeks and months,” and he thanked the UK for “the major defence and economic aid,” while reiterating “it’s important that Great Britain is ready to further strengthen it”.

‘Europe not the place for murderers’

In reference to the Novichok poisonings of Russian double agent Sergei Skripal and his daughter in Salisbury in 2018, he reminded that “more than once, Russia has sent killers to Europe under the guise of ordinary tourists.

“They have seen enough at the spire in Salisbury, German streets, and weapons warehouses in the Czech Republic. Enough! Europe is not a place for murderers to walk around.”