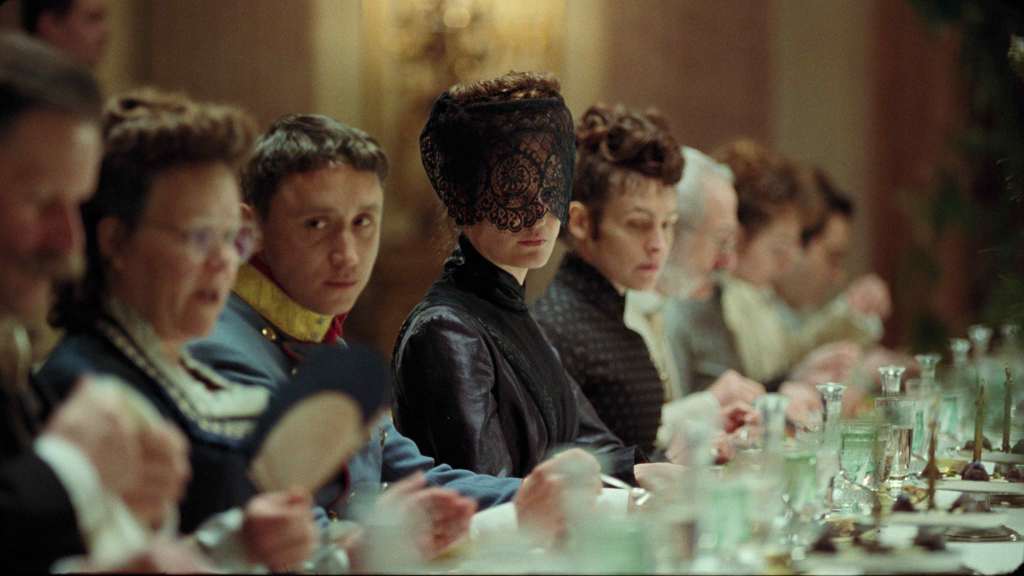 New Yorkers braved the cold this weekend for Corsage at two theaters ( IFC Center, Film at Lincoln Center) as Marie Kreutzer’s biopic of Empress Elisabeth of Austria starring Vicky Krieps grossed an estimated $32,000 over the three-day weekend for a robust $16k per screen average.

The four-day estimate for the IFC Films biopic of Empress Elisabeth of Austria – known as Sisi — is $36k, a PSA of $18k.

“We are so proud of the journey Corsage has been on as it continues to find support with critics and audiences alike as they respond to a bold tour-de-force performance from Vicky Krieps and impeccable direction by Marie Kreutzer,” said Arianna Bocco, President of IFC Films.

The movie “has been resonating on a global scale since its premiere at Cannes and has set the stage for a timely pop-cultural moment with the real-life story of Empress Sisi and the power of female stories,” Bocco said. Corsage is an older term for corset, or bodice, which fashion-forward Sisi is seen struggling with daily.

Sisi is also the center of Netflix series, The Empress.

Corsage, on the Oscar shortlist for Best International Feature, world premiered at Cannes, where Krieps won the Un Certain Regard Best Performance Prize. It played TIFF and NYFF, took Best Film at the London Film Festival and was nominated for best international feature for the Gotham Award (Audrey Diwan’s Happening, also from IFC Films, won) and the Film Independent Spirit Awards.

It expands to LA on Friday and nationwide to circa 200 theaters Jan. 6.

UAR’s release of Sarah Polley’s Women Talking opened to a $40k at eight locations for a PSA of just over $5k and an estimated $53k total for the four days. Debuting in NYC, LA, Chicago, Austin and Toronto, it will continue to expand with a wide release set for Jan. 20. Based on the book by Miriam Toews with Brad Pitt as an executive producer. Starring Rooney Mara, Claire Foy, Jessie Buckley, Judith Ivey and Sheila McCarthy, with Ben Whishaw and Frances McDormand. A group of women in an isolated religious colony struggle to reconcile their faith with a series of sexual assaults committed by the men there.

Living from Sony Pictures Classics grossed $21.2k on three screens for a per screen average of $7.1k. The Oliver Hermanus film started on three screens in New York (Angelika, New Plaza Cinema) and LA (Royal). Written by Nobel Prize-winning writer Kazuo Ishiguro, and starring Bill Nighy, Aimee Lou Wood, Alex Sharp, Tom Burke, the film is the story of an ordinary man reduced to a shadow existence by years of oppressive office routine, who makes a supreme effort to turn his dull life around. Based on Akira Kurosawa’s 1952 film Ikiru.

Some recent specialty openings including The Whale, The Bashshees of Inisherin, Tár and The Fabelmans have topped these numbers, but they are solid debuts given frigid New York temperatures this weekend and the overall state of the indie theatrical market. Grosses remain well below pre-Covid levels, often regardless of budgets and production value, stars or stellar reviews — a state of affairs that producers and distributors will continue to grapple with into 2023.

Holdovers: A24’s release of Darren Aronofsky’s The Whale starring Brendan Fraser expanded to 603 screens in week three, taking in an estimated $924k. The cume through Sunday is over $2 million.

The Menu from Searchlight Pictures took in $617k on 840 screens in week six with an estimated four-day cume of $900k four-day and cumulative gross approaching $34 million.

In week seven, Universal’s The Fabelmans by Steven Spielberg earned $550k for three-days, and expects $880k for the four-days on 1,122 screens. Estimated domestic cume through Sunday is $9.7 million.

The Whale, The Menu and The Fabelmans ranked, respectively, nos. 7,8 and 9 on the domestic top ten.